Che-Castaldo et al., 2017
“We found a marked and steady increase in [Adélie penguin] abundance around the rest of the Antarctic continent, including both Eastern Antarctica and the Ross Sea [during 1982-2015].”

Once again I’m bringing you today another one from Lüning’s and Vahrenholt’s Die kalte Sonne, this one concerning a recent study claiming the “king penguin populations are at heavy extinction risk under the current global warming predictions“. 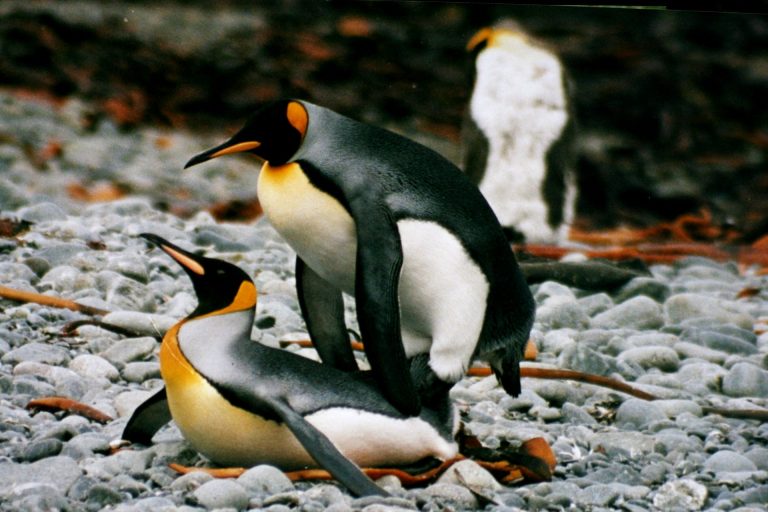 With dire (phony) study claims of king penguins being threatened by global warming, climate science and media once again do their usual number on the public. Image source here. CC BY-SA 3.0

What did the king penguins do 1500 years ago when it was warmer than it is today?

King’s penguin threatened by climate change
Climate change is threatening more than 70 percent of the king penguin colonies. So writes an international team of scientists in the journal ‘Nature Climate Change’. The animals have to move further south and thus into colder areas. […] The king penguin (aptenodytes patagonicus) is the second largest type of penguin after the emperor penguin. According to the study, the population is currently 1.6 breeding pairs. Over thousands of years the king penguins have been able to rely on the Antarctic polar front, the researchers write. That is a system of currents the transports masses of water from the depths to the surface and so provides for a large fish supply for a relatively small area. Because of climate change, the polar front is shifting to the south and is leaving the Crozet Islands, the Kerguelen and Marion Island on which the penguins live.”

Read more at the Luzerner Zeitung.

Once again we have the fairy tale that everything in the past was stable and that today it’s warmer than ever before. But just one look at Stenni et al. 2017 would have sufficed:

Antarctic climate variability on regional and continental scales over the last 2000 years
[…] Our new reconstructions confirm a significant cooling trend from 0 to 1900 CE across all Antarctic regions where records extend back into the 1st millennium, with the exception of the Wilkes Land coast and Weddell Sea coast regions. Within this long-term cooling trend from 0 to 1900 CE, we find that the warmest period occurs between 300 and 1000 CE, and the coldest interval occurs from 1200 to 1900 CE. Since 1900 CE, significant warming trends are identified for the West Antarctic Ice Sheet, the Dronning Maud Land coast and the Antarctic Peninsula regions, and these trends are robust across the distribution of records that contribute to the unweighted isotopic composites and also significant in the weighted temperature reconstructions. Only for the Antarctic Peninsula is this most recent century-scale trend unusual in the context of natural variability over the last 2000 years. […]”

Let’s take a look at the temperature chart for all of Antarctica over the past 2000 years:

Temperature curve for Antarctica over the past 2000 years. Source: Stenni et al. 2017.

As we see, it has not even been 1000 years ago since the penguins were forced to leave the area where they currently find themselves due to oncoming cold. We would gladly provide the activists with a new pair of spectacles that would correct their climate-historical myopia.