Frank Bosse and Prof. Fritz Vahrenholt look at the sun and oceans in their latest report here at Die kalte Sonne.

The sunspot number for February 2018 was 10.6 and thus was some 30% below the meanfor this time into the cycle. At the moment solar activity is close to quiet. As the following comparison chart shows for 111 months into the cycle, the current cycle is the weakest we’ve seen in close to 200 years, and has been only some 55% as active as the mean cycle so far: There are are hundreds of scientific papers showing a link between climate and solar activity worldwide. A number of papers show that dry and wet periods at different regions are closely related to solar cycle activity as well.

Just 10 years ago, all the talk was about the Arctic sea ice “death spiral”, with some of scientists hysterically predicting the sea ice would soon disappear altogether in the summertime. Ten years later the scientists are now scratching their heads as sea ice has stabilized and is showing some clear signs of a rebound.

Japanese skeptic climate blogger Kirye at Twitter posted a message showing how March sea ice volume has made a remarkable comeback in terms of volume (which is what really counts) compared to 2018 – despite the very warm Arctic surface temperatures seen this past winter. 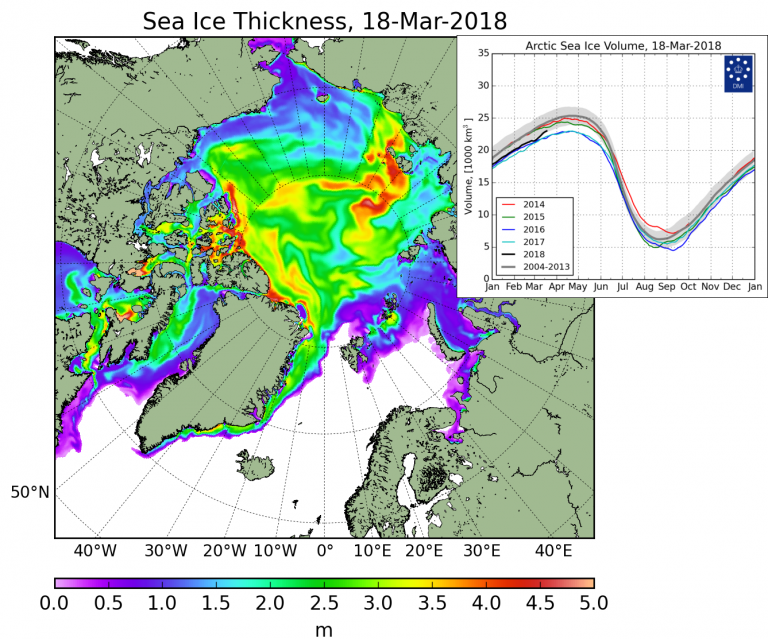 Kirye tweets: “The real #Arctic sea ice thickness is much higher than in 2008. We have not even once seen climate alarmists’ predictions come true, and it is unlikely to happen in the future.”

Tony Heller (who blogs under the Steve Goddard name) also commented on the ice volume growth at Twitter here: “In fact, Arctic sea ice is growing very rapidly and volume is highest in several years.”

The following chart shows how Arctic surface temperatures above 80°N latitude have plummeted over the past two weeks after a mild winter:

Robust recovery in the Antarctic

Sea ice expansion in the Antarctic also has seen a robust recovery in terms of sea ice area, according the the latest chart by the University of Bremen. 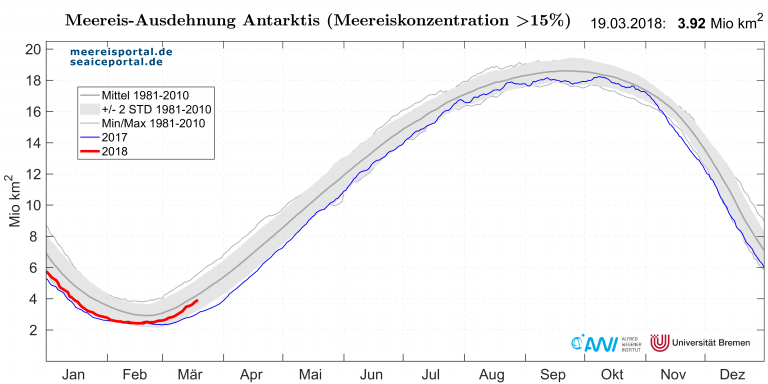 Sea surface temperature back to normal

Although global temperatures spiked from 2015 to 2017, the spike was due to the El Nino phenomenon. The following chart depicts the sea surface temperature anomalies from the mean: Sea surface temperatures have since fallen back to near normal levels and it remains to be seen if a new higher plateau will be established after the 1998 El Nino event. In summary, most of the globe is not behaving as climate scientists expected.