As we have been hearing recently, global CO2 emissions continue their steady climb, despite the trillions of dollars committed to green energy sources worldwide and efforts to curb CO2 emissions.

Looking at countries individually, Germany, a self-designated “leader” for carbon free energies, saw its equivalent CO2 greenhouse gas emissions in 2017 fall only a measly half a percent.

If any country has seen huge chasm between its CO2 reductions performance and its lofty green rhetoric, Germany is it.

Despite the hundreds of billions already spent on green energies, mainly, wind, sun and biogas, Paris Accord cheerleader Germany has not seen any progress in CO2 reductions ten years running: 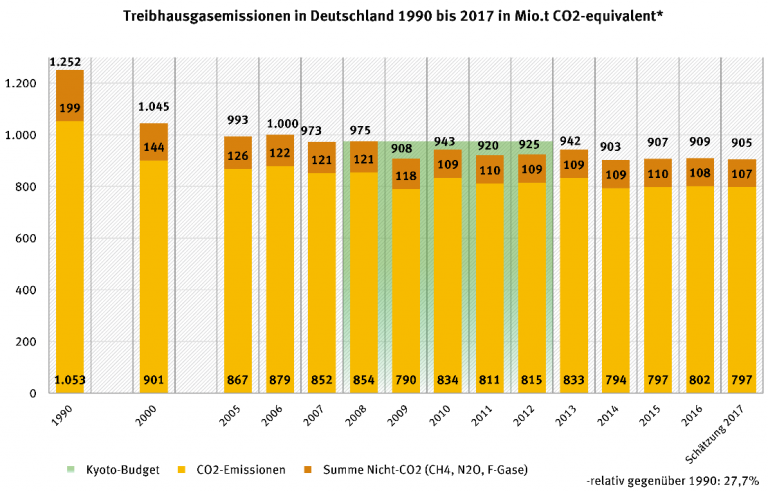 Most of the country’s CO2 reductions since 1990 arose from the shutdown of old communist run East German industry, after the eastern and western parts of the divided nation united in 1990.

Also huge CO2 reductions resulted from the offshoring of energy-intensive industries, to countries where regulations are less strict, labor is cheaper and energy efficiency is woefully lower; for example: China. The true result: Germany managed to cut its CO2 equivalent emissions, but the net result is most likely greater overall CO2 emissions.

The same could be said about plastic in our oceans. Often it’s best to keep the industry home, where at least it’s done far more cleanly.

Huge price for so little result

Moreover, Germany’s investment in green energies really did not begin in earnest until 2005, and so the results have been truly a flop. All that money for so little.