Something off topic today, and intended as food for thought. It’s my infrequent post on nutrition. Yes, I also would like my readers to be healthy and happy.

In western societies, when asked why so many people are getting sick with chronic diseases today, and thus die prematurely, too many medical experts like to blame it on stress!, genetics, pollution, lifestyle, or just plain bad luck. So take my pills!

However, these often cited reasons are all too often bogus explanations designed to get you to accept horrendously costly treatments instead of opting for effective prevention. Prevention and cure, after all, are bad for Big Pharma’s bottom line. The big money is in lifetime treatment.

And in western societies, far too little is being done to drive home the point that the junk-food contaminated Western nutrition is the root cause of many chronic diseases and thus our food supply needs to be revamped radically and rapidly. If this were done, much misery and high costs could be spared.

What a lot physicians won’t tell you is that many of these diseases are in fact nutrition-related and gradually emerge after years of poor quality (low-nutrient) diets. Many common chronic diseases could be prevented, or at least delayed by years, simply by eating high-nutrient foods. The most important thing you can do to live longer and healthier is to eat correctly, and to start doing so immediately.. Your doctor can tell you to reduce stress and to go for walks all he wants, but unless you wean yourself off the junk food, you’ll very likely end up chronically ill and forever connected to the miserable Big Pharma lifeline.

To illustrate how stress is an over-rated factor in causing chronic illness, one only needs to check out the countries with the highest life expectancies. Many happen to be high stress environments, like Japan and Europe. Of course stress is generally to be avoided, but is it really the big silent killer everyone makes it out to be? Statistics show us the answer is no. The big killer is junk food. 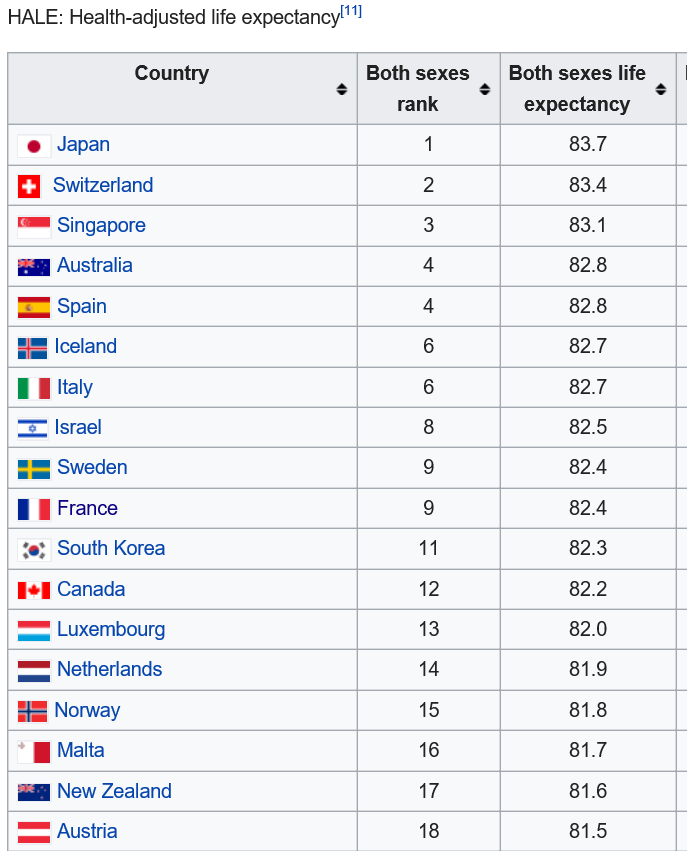 High stress, urbanized Japan No. 1 in life expectancy. Source: WHO.

Anyone who has ever visited Japan will tell you that most people there live in high-stress, urban environments and work among the longest number of hours annually. Most Japanese in fact do not spend their time meditating in harmonious Zen rock gardens.

Arguably the most important factor to Japan’s excellent collective health is its nutritional culture. Whereas in western culture many people stuff themselves with sugary, processed junk foods, snacks, sodas and sweets and bad oils, the Japanese diet is rich in vegetables, high-nutrient carbs, fish, fermented foods, antioxidant super-foods and green tea to name a few.

But what about USA’s relatively high life expectancy? First, it really isn’t that high, and actually ranks a lowly 31st on the WHO list above!

And although the American diet is among the world’s most notorious, American’s do live about 80 years, and so food can’t be the big factor one might argue. Though Americans live relatively long, we need to keep in mind that huge numbers of them are plagued by chronic disease, and many are simply kept alive in a state of limited health or outright misery for years by Big Pharma. The average American today spends some $10,000 annually on health care alone.

Here’s what some countries spend on health care per capita: 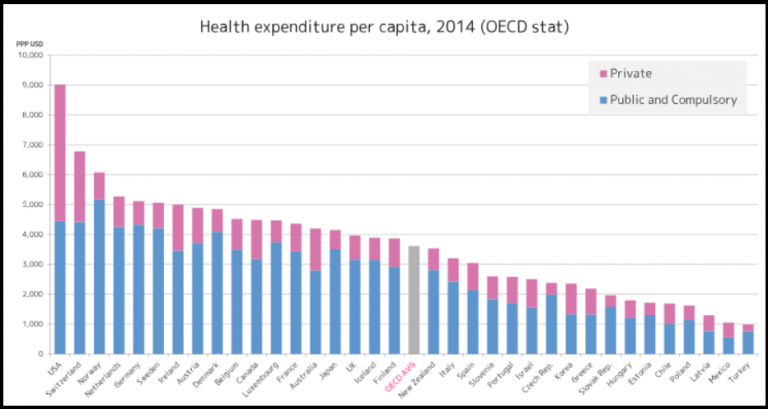 The USA spends the most by far on health care, yet does not even make the Top 30 on the list for life expectancy. On the other hand, high stress, urbanized Japan spends near the OECD average on health care, yet has the highest life expectancy. Italy also sees a good life-expectancy-to-healthcare-spending-ratio, arguably in large part due to its health Mediterranen diet. Chart: OECD Data: Health resources – Health spending.

A longer life at a fraction of the healthcare cost

Also we note that poorer Mediterranean countries such as Greece, Cyprus, Spain and Malta spend a mere fraction on healthcare of what Americans spend, yet live longer. It’s the food that makes the difference.

With that kind of spending, the country should be way up the top of the list for life expectancy, but at a lowly 31st place it’s not even close to the top. One reason is because bad American junk food is creating sickness and thus a big demand for health care. Big Junk is feeding Big Pharma.

To live longer and healthier, good food is the key. Eat healthy, and the rest will take care of itself.

33 responses to “If Stress Is A Killer, Then Why Do People In High Stress Countries Like Japan Live So Long?”