Veteran Swiss meteorologist Jörg Kachelmann says 10 deaths caused by a “surprise snowstorm” had nothing to do with “climate change”, but more to do with poor human judgement and a misguided reliance on “terrible quality weather apps”.

Last weekend a group of 6 skiers were killed by a “sudden snowstorm” high in the Swiss and Italian Alps, while four other persons perished in the same storm. Read background here.

By Monday morning, April 30, after victims had failed to appear at a mountain shelter as planned, the manager of the shelter alerted authorities, who then launched a search and rescue operation. For a total of 10 persons, help came too late.

On April 29, a so-called warm-air föhn blew over the Swiss Alps, which led to severe snow conditions where the skiers were located, over 3000 meters elevation. According to meteorologist Kachelmann, first came heavy snowfall, then powerful winds with gusts of up to 200 km/hr followed.

Next temperatures plummeted precipitously. When it was over 10 persons were dead.

Some of the media immediately pointed the finger at climate change. In a commentary at the online Swiss-based Tagesanzeiger here, meteorologist Jörg Kachelmann wrote that the media “concentrated from the first moment on ‘ a surprising, unexpected snowstorm’, on the ‘sudden deterioration of the weather” and the ‘precipitous drop in temperature’ which some grotesquely blamed on climate change.”

Fact: freak storm had been forecast days in advance

In his Tagesanzeiger commentary, Kachelmann characterizes blaming the tragedy on climate change as false, and reminds that such weather anomalies are typical of Switzerland’s rugged mountainous terrain, and is well known.

Moreover Kachelmann notes in the commentary that the bad weather had been forecast days before it actually hit, and so it was not “a surprise”. The veteran Swiss meteorologist wrote that “all weather models” had been indicating föhn conditions  already three days before, on Thursday April 26.

And by the morning of April 27, Kachelmann wrote that the drama had already been “concrete on the weather charts” and that snow would begin to fall by 1 pm Sunday afternoon on April 29. 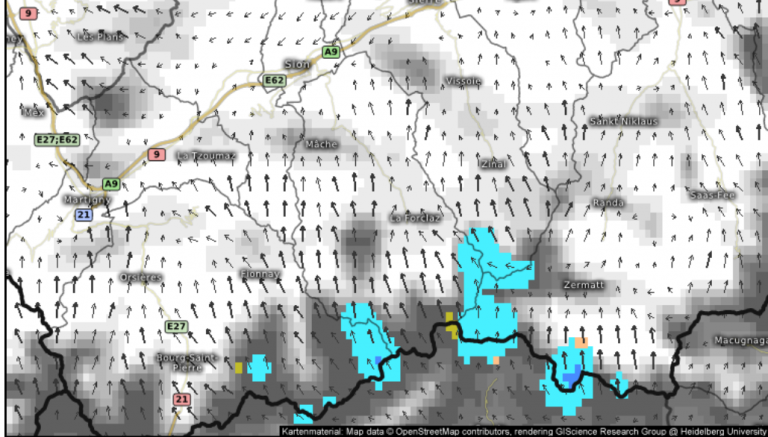 By 8 pm Sunday, the area was hit by wind gusts of up to 200 km/hr. Next temperatures plummeted.

So why didn’t the climbers heed the forecast of dangerous conditions, which were clear well in advance, and avoid the area? After all, weather is the all important factor to consider before venturing out into the high elevation Alps. It’s long known not to be out in such conditions.

Quality of weather apps is “nonsense”

Kachelmann comments that reliance on the general lousy quality of weather apps likely played a major role. According to the renowned Swiss meteorologist, the sad truth is that “the worst weather forecast today by far is the one that gets used the most: the forecast app on the mobile device.”

According to Kachelmann, on the quality of app forecasts:

There’s a grotesque number of people who rely on this nonsense.”

Kachelmann notes that weather apps often have resolutions that are so poor that locally they are virtually useless. In the image in the article, he compares the quality of an app (upper image) to that used by a professional meteorologist. Kachelmann is boggled that people would think they can get good forecasts “simply by entering a zip code!”

Many people believe these apps are the best when it comes to weather forecasting. The opposite is in fact true. The terrible quality of weather forecast apps is killing people.”