In all five press releases the mean temperatures provided were wrong in the sense they had been overheated!

For example on February 27, 2018, the DWD also released its preliminary temperature summary for both February 2018 and the 2017/18 winter (December-January-February). In each the mean temperatures had been overstated by 0.1°C and were later corrected (quietly) downward.

Also the preliminary temperature results for January, 2018, made public in the late January press release were overstated by 0.1°C, Schneefan writes.

Finally, just recently, the DWD issued it’s press release with the preliminary results for April, 2018. Here the press release stated that April in Germany was the hottest recorded since measurements began in 1881. According to the DWD, the mean temperature was 12.4°C for the month, some 4°C above the 1981-2010 mean. Now it turns out that the mean was actually 12.3°C and not 12.4°C.

Press releases to inform the public about the later corrected (cooler) results are never issued.

Even a tenth of a degree can make a difference. For example, one of the oldest datasets comes from the station at Hohenspeißenberg, near Offenbach, which goes back to 1791! 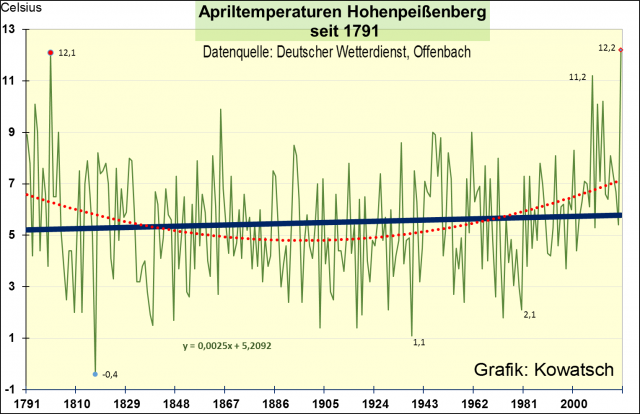 Even during the time of Goethe, in the year 1800, April at this station was as hot as it was this year. Overall, temperatures at Hohenspeißenberg have only been elevated over the past dozen or so years. Now should the 12.2°C reading of April, 2018, get corrected downward (as the DWD has a habit of doing), then it won’t be a new record.

Also the DWD has the habit of comparing German mean temperatures to the much cooler 1961-1990 mean, a practice that no one uses globally. Schneefan comments:

We see that the management of the DWD has not observed the WMO guideline in that it uses the outdated (colder) 1961-1990 climate period instead of the (warmer) 1981-2010 climate period in order to generate more positive – and thus more false – deviations to show a warming in Germany that does not exist in reality.

Through this intentional alarmist false reporting, regional stagnations and even declines in temperature in Germany are getting obscured, and that at the cost of the taxpayer.”