According to McElhany, 2017, “there are no studies that directly demonstrate modern day effects of OA [ocean acidification] on marine species.”  There still aren’t. 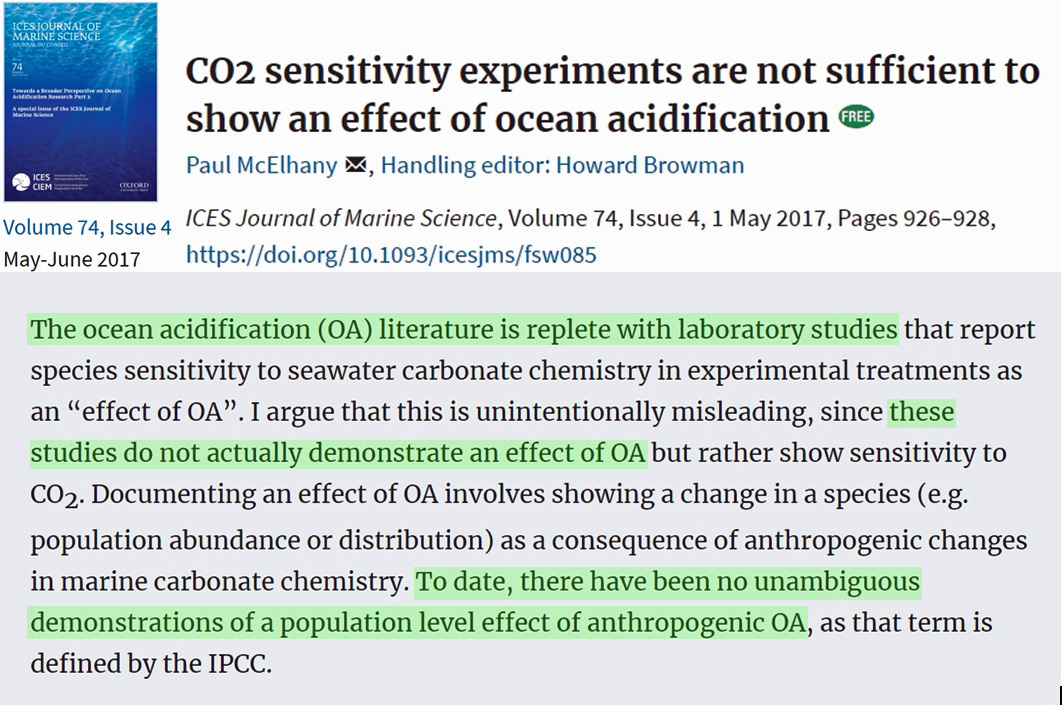 By way of comparison, from one season to the next, or over the course of less than a year, pH levels naturally change by twice that amount (±0.15 pH units).  On a per-decade scale, oceanic pH can naturally fluctuate up and down by up to 0.6 units within a span of a decade (as shown in red below). 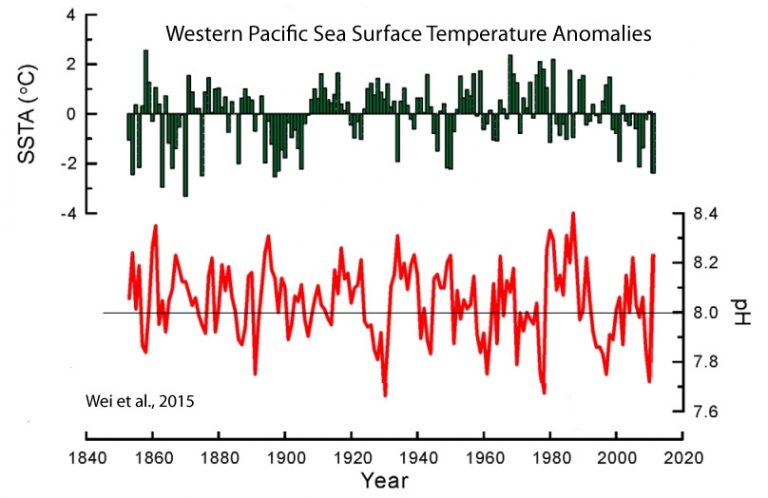 Without valid scientific explanation or detailing the driving mechanism, prognosticators of CO2-induced climate doom are claiming (via modeling) that the -0.08 change in 265 years will morph into a -0.4 change in the next 82 years!

Even worse, experiments have revealed that marine species (i.e., corals) naturally survive in the “acidic” environments predicted by models, thereby demonstrating that we still have no scientific confirmation that we humans are actually harming the oceanic biosphere with our CO2 emissions.

“Uptake of anthropogenic CO2 is changing the chemistry of the global ocean [1]. When entering the sea, CO2 reacts with water to form carbonic acid, and this ocean acidification (OA) has lowered the global ocean mean surface pH from 8.13 during the pre-industrial age to the present day 8.05. This trend is predicted to continue and current models estimate a further decrease of up to 0.4 pH units by the year 2100.”

“We incubated females at present day conditions (pHT 8.0) and year 2100 extreme conditions (pHT 7.5) during oogenesis and subsequently reciprocally transplanted laid eggs between these two conditions. Statistical tests showed no effects of maternal or direct exposure to OA [ocean acidification] at this level [7.5 pHT].”

“For example, over seasonal time-scales Porites corals from the Great Barrier Reef (GBR) have a large range in pHcf of ~8.3 to ~8.5, significantly greater (~×2 to ~×3) than that of reef-water (pHT ~8.01 to ~8.08), and an order of magnitude greater than that expected from ‘static’ laboratory experiments.”

“Strong physiological controls, but of a different character, are found in corals grown in a Free Ocean Carbon Enrichment Experiment (FOCE) conducted in situ within the Heron Island lagoon (GBR). These corals exhibit near constant pHcf values regardless of external changes in temperature and seawater pH. This pattern of strong physiologically controlled ‘pH-homeostasis’, with elevated but constant pHcf has been found despite large natural seasonal variations in the pH (±0.15 pH units) of the lagoon waters, as well as the even larger super-imposed decreases in seawater pH (~0.25 pH units) designed to simulate year 2100 conditions.”

“In natural reef environments we thus find that the processes influencing the up-regulation of pHcf in symbiont-bearing corals are subject to strong physiological controls, behaviour that is not well simulated in the current generation of aquaria-based experiments with fixed seawater pH and temperature.”

“Over a period of 32 days, larval survival, growth in size and weight, and instantaneous growth rate were assessed in a crossed experimental design of two temperatures (10°C and 12°C) with two CO2 levels (400 μatm and 900 μatm CO2) at food levels mimicking natural levels using natural prey. Elevated temperature alone led to increased swimming activity, as well as decreased survival and instantaneous growth rate (Gi). The comparatively high sensitivity to elevated temperature in this study may have been influenced by low food levels offered to the larvae.”

“Larval size, Gi and swimming activity were not affected by CO2, indicating tolerance of this species to projected “end of the century” CO2 levels. A synergistic effect of elevated temperature and CO2 was found for larval weight, where no effect of elevated CO2 concentrations was detected in the 12°C treatment, but a negative CO2 effect was found in the 10°C treatment. Contrasting CO2 effects were found for survival between the two temperatures. Under ambient CO2 conditions survival was increased at 12°C compared to 10°C.” [Survival rates increased with warmer water temperatures]