Since environmental elitists have taken the helm in Europe, they like to fancy themselves and pose as rescuers of the planet.

One example is Europe’s claim to being the global leader in climate protection. Leaders like having everyone believe that Europe reducing CO2 emissions 80% by 2050 will to save the climate and bring back the glorious stable weather of 150 years years.

Of course this is pure delusion.

While the planet emits some some 37 billion tonnes of greenhouse gases annually, Europe’s share is a meager 4.5 billion tonnes, or roughly 12% of global output. Cutting that small fraction 80% by 2050 will certainly and rapidly be offset by growth in developing countries. Europe’s effort is not going to make any real difference. Moreover it’s still doubtful that CO2 causes substantial climate change.

The proposals will target the elimination of plastic items like straws, cotton buds, cutlery, balloon sticks and drink stirrers. That may sound all sound good and noble, but it’s not going to make a dent at all because the real source of the ocean plastic problem is not Europe at all.

In reality the continent’s share of ocean plastic pollution is so tiny that even if it did manage to eliminate all of it, the globe’s oceans would never notice it.

A recent study published by Christian Schmidt, hydrogeologist and author of the report, says that 90% of the plastic that gets dumped into the oceans annually come from only 10 rivers. Eight of these rivers are in Asia and the other two are located in Africa.

According to Scientific American here, the Yangtze alone dumps up to an estimated 1.5 million metric tons of plastic waste into the Yellow Sea every year. By comparison, the Thames dumps a puny 18 tonnes of plastic into the sea annually. In the above chart, the Thames River would be represented by a tiny dot.

What takes the Thames River an entire year to dump plastic into the ocean, gets done by the Yangtze in just 7 minutes! In other words, the Yangtze out-pollutes the Thames in terms of plastic 80,000 to 1. The relationship for other European rivers is similar. 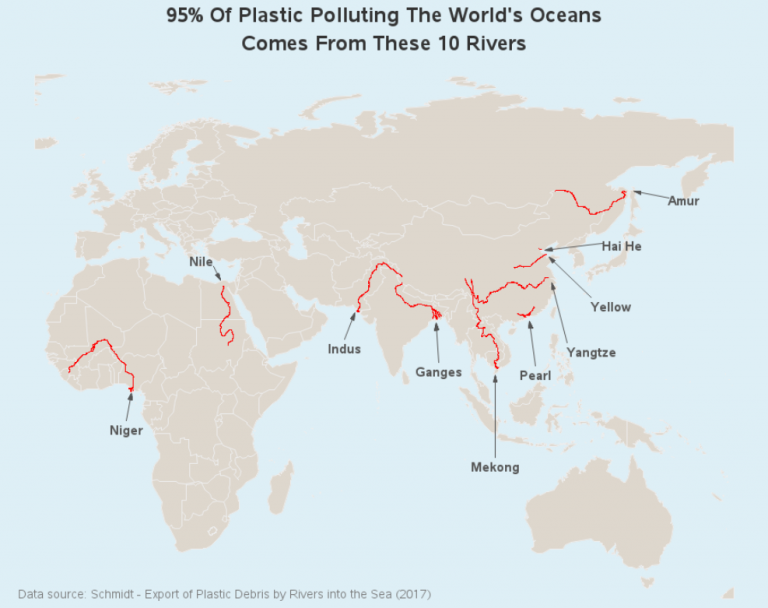 Asia is treating the oceans as an open sewer. )Note that the figures are very rough estimates, with total plastic discharge into oceans ranging from 500,000 to 13 million tonnes annually).

Billions for clean up, not for fake problem climate change

In summary, Europe dumps only a very tiny fraction of a percent of the world’s ocean plastic. If Europe’s leaders were really serious about tackling the ocean plastic problem, they would find a way to stem the ocean plastic at its real source, and not harass its citizens with more useless regulations.

What’s infuriating is that the globe could accomplish much more with the environment if it spent the hundreds of billions it wastes on the fake problem of climate change.

Europe’s approach a joke, a display of spinelessness

Though a crackdown on plastic and our single-use throw-away society is a good first step, if Europe really wanted to do something meaningful, it would get seriously tough with Asia and its practice of dumping waste plastic into rivers and oceans. This could come in the form of trade tariffs and sanctions with real teeth.

Europe could also reconsider its practice of shipping its garbage to third-world countries for “recycling”.

Like climate change, the latest announcement of banning straws and drink stirrers is nothing but pure inconsequential, environmental grandstanding. It isn’t going to accomplish a damn thing accept make green morons irrationally feel better about themselves.

It may look like Europe’s leaders are doing something, but in reality they are shirking their real international responsibilities by turning a blind eye to Asia and Africa.

54 responses to “Latest Euro Delusion: EU Wants Us To Believe It Can Rescue Oceans By Removing Less Than 0.0154 Of The Plastic!”