Because trees may only grow within narrowly-defined temperature ranges and elevations above sea level, perhaps the most reliable means of assessing the air temperatures of past climates is to collect ancient treeline evidence.  In a new paper, Kullman (2018) found tree remnants at mountain sites 600 to 700 meters higher than where the modern treeline ends, strongly implying Early Holocene air temperatures in northern Sweden were 3-4°C warmer than recent decades.

“Conservatively drawing on the latter figure and a summer temperature lapse rate of 0.6 °C per 100 m elevation (Laaksonen 1976), could a priori mean that, summer temperatures were at least 4.2 °C warmer than present around 9500 year before present. However, glacio-isostatic land uplift by at least 100 m since that time (Möller 1987; Påsse & Anderson 2005) implies that this figure has to be reduced to 3.6 °C higher than present-day levels, i.e. first decades of the 21st century. Evidently, this was the warmth peak of the Holocene, hitherto.”

“The Holocene climatic optimum was a period 8–5 kyr ago when annual mean surface temperatures in Greenland were 2–3°C warmer than present-day values. … The initial mass loss in response to the temperature increase in the early Holocene is largest when forcing the ice sheet with the temperature and accumulation reconstructions from Gkinis and others (2014) (Experiment 5). In this simulation, temperature anomalies peak at more than 5°C above the present-day reference climate in the early Holocene and the ice sheet loses 20% of its volume in the 3000 years following the onset of the Holocene through increased surface melting.” 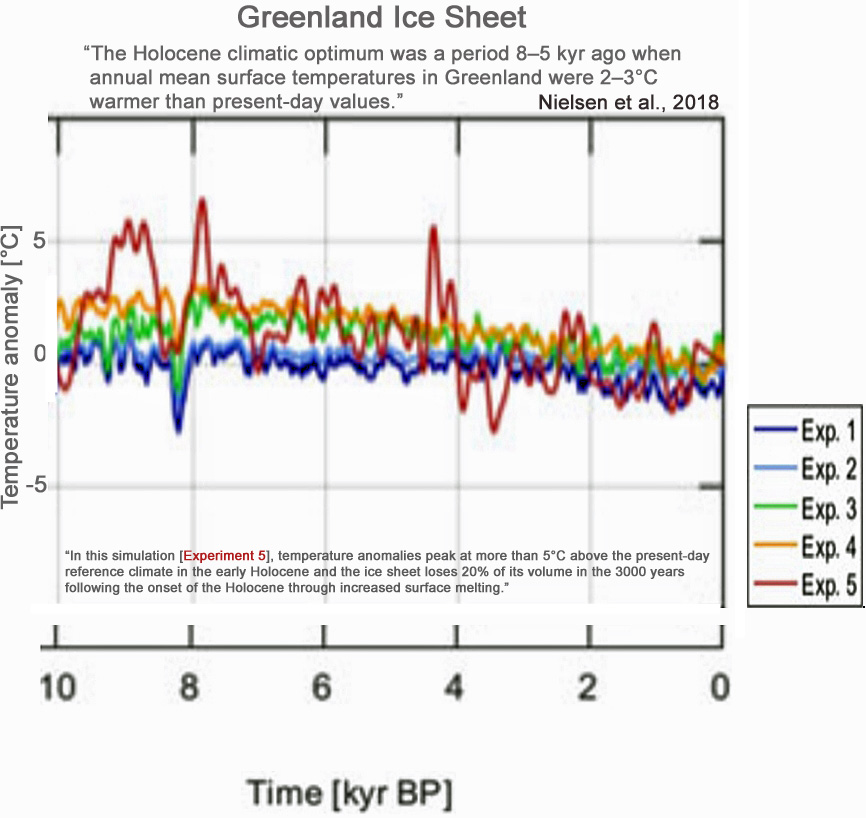 “The largest and most rapid retreat of the ice sheet was found for Experiment 5, which was forced by the temperature and accumulation reconstructions of Gkinis and others (2014). In this temperature reconstruction, temperature increases rapidly at the onset of the interglacial and has several shorter periods with temperatures more than 5°C above present in the early Holocene. .. Geological evidence suggests further that the ice-sheet margins in the southwest retreated up to ∼ 100 km behind their present-day position during the mid-Holocene (Funder and others, 2011). This evidence is further supported by interpretations of relative sea-level records and bedrock uplift rates that also point towards ice sheet retreat beyond the present ice volume in the mid-Holocene (Khan and others, 2008; Funder and others, 2011; Lecavalier and others, 2014).”

“We find that the ice sheet retreats to a minimum volume of ∼0.15–1.2 m sea-level equivalent smaller than present in the early or mid-Holocene when forcing an ice-sheet model with temperature reconstructions that contain a climatic optimum, and that the ice sheet has continued to recover from this minimum up to present day.” 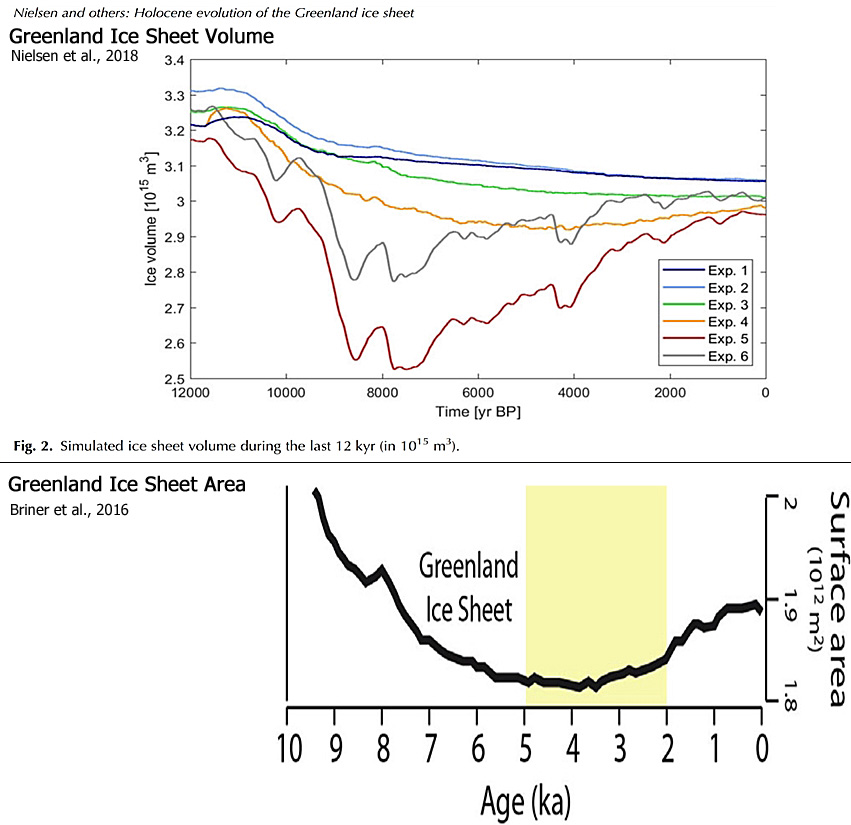