Dr. Boris M. Smirnov, a prominent atomic physicist, has authored 20 physics textbooks during the last two decades.  His latest scientific paper suggests that the traditional “absorption band” model for calculating the effect of atmospheric CO2 during the radiative transfer process is flawed.  New calculations reveal that the climate’s sensitivity to a doubling of the CO2 concentration is just 0.4 K, and the human contribution to that value is a negligible 0.02 K. 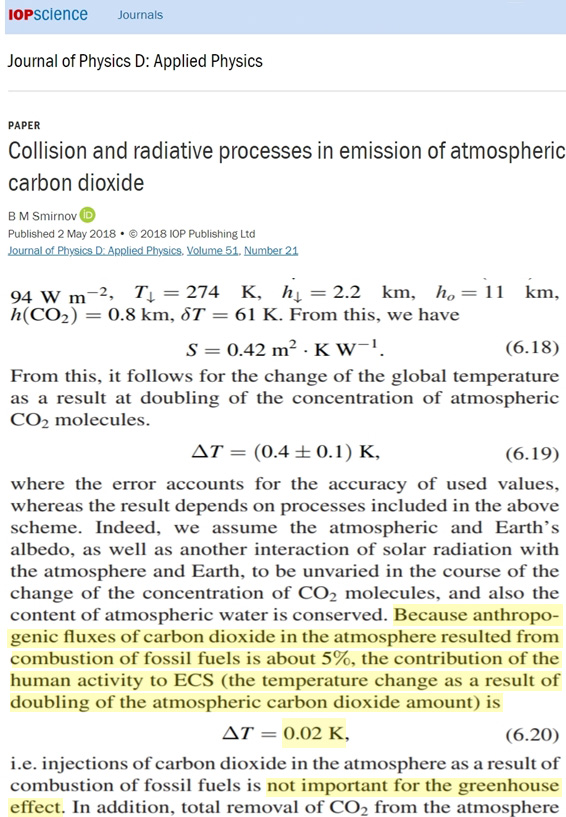 Collision and radiative processes in

“One can explain why the absorption band model is not suitable for the change of the radiative flux due to doubling of the concentration of CO2 molecules. This quantity is determined by spectral ranges where the atmospheric optical thickness is of the order of one. Because averaging over oscillations for the absorption band model removes such ranges from consideration, this model leads to a large error.”

“[I]t follows for the change of the global temperature as a result at doubling of the concentration of atmospheric CO2 molecules [is] ∆T = (0.4 ± 0.1) K, where the error accounts for the accuracy of used values, whereas the result depends on processes included in the above scheme. Indeed, we assume the atmospheric and Earth’s albedo, as well as another interaction of solar radiation with the atmosphere and Earth, to be unvaried in the course of the change of the concentration of CO2 molecules, and also the content of atmospheric water is conserved.”

“Above, we connect the emission of a gaseous layer located over a hot surface with the greenhouse phenomenon in the Earth’s atmosphere due to CO2 molecules. This analysis exhibits the importance of interaction of a radiating molecule with surrounding air molecules that is essential both in broadening of spectral lines and for absorption of CO2 molecules by other atmospheric components, as well as emission of these components. The evaluations fulfilled show that the contribution of emission of CO2 molecules to the total radiative flux directed toward the Earth is approximately 20%, as well as this contribution to its derivation over the atmospheric carbon dioxide amount. Comparison of methods of the absorption band which uses the absorption coefficient averaged over its frequency oscillations and the ‘line-by-line’ method without this averaging exhibits the accordance of these methods for determination of the radiative fluxes and a strong difference in evaluation of its derivative. This shows the importance of the ‘line-by-line’ method for the analysis of climatic problems.”

“Note that above we give a simple algorithm to determine the total emission of the Earth’s atmosphere due to CO2 molecules with using the spectroscopic parameters of these molecules on the basis of classical molecular spectroscopy. We note the principal steps which allow us to obtain this algorithm in a simple form. First, there is a local thermodynamic equilibrium for vibrationally excited molecules. Therefore, radiation is created by vibrationally excited molecules which are formed in collisions with air molecules, and their number density is determined by the Boltzmann formula. Second, the atmospheric optical thickness exceeds one, i.e. radiation toward the Earth and outside are separated, and the radiative flux at a given frequency is the blackbody flux, so that the radiative temperature for this frequency is the temperature of an effective layer. Third, interaction between carbon dioxide molecules and other optically active atmospheric components is of importance. This means that a change of the concentration of CO2 molecules leads simultaneously to a change of the radiative flux due to other components.”

“Based on the total absorption coefficient, which is a sum of those due to CO2 molecules and other atmospheric components, we take into account this effect. As a result, one can evaluate an additional radiative flux to the Earth’s surface due to a change of the atmospheric carbon dioxide concentration, and the corresponding analysis convinces us that contemporary injection of carbon dioxide in the atmosphere as a result of combustion of fossil fuels is not important for the greenhouse effect.”

70 responses to “Atomic Physicist: Human CO2 Emissions Have An Equilibrium Climate Sensitivity Of A ‘Not Important’ 0.02 K”