Meteorologist Dr. Ryan Maue pointed out here at Twitter that hurricane activity has not lived up to the climate model projections and that major hurricanes in the 1970s and 80s were “likely underestimated” 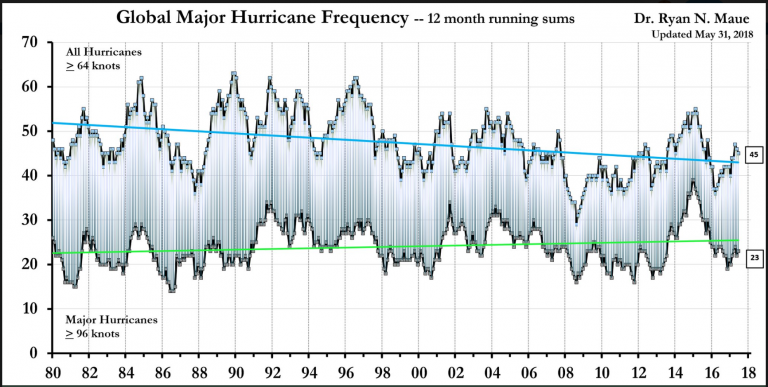 Over the past 10-years (120-months) there have been 232 major hurricane strength tropical cyclones globally. In the 10-years prior, there were 252 majors. And the 10-years before that 258 majors. We likely underestimated majors in 1970s & early 1980s prior to Hi-Res satellites.”

No trend in flooding in Europe

And at the their Die kalte Sonne site here geologist Dr. Sebastian Lüning and Prof. Fritz Vahrenholt report in Europe that floods and storms In Europe have not been more frequent, despite all the unending claims by the media.

Over the past week the German media hyped up some local, severe thunderstorms that had hit in parts of the country, causing heavy downpours and local flooding.

The media injected their usual Biblical tones in their reports.

Lüning and Vahrenholt first cite a recent study, which was even featured in detail by German DLF public radio, which tells us that the frequency and severity of heavy rain events and flooding have not increased in Europe over the past 150 years:

Severe weather in Europe: Flooding not more than in the past
When it comes to torrential rainfall and flooding, many people agree: Such things never happened in the past. But that is not true Dominik Paprotny of the University of Technology in Delft analyzed. Historical sources show that large floods are not more frequent today.”

Danger of flooding is the same as it was 150 years ago
High water and flooding in Europe has not become more frequent at all, a team of scientists in the Netherlands show. The scientists have put together a databank that looks at storms and floods back to 1870. Most international databanks go back to only to 1970.”

The study by Paprotny et al. 2018 appeared in Nature Communications and it can be downloaded free of charge as a pdf file. In the abstract:

Trends in flood losses in Europe over the past 150 years

[…] Here we utilize a gridded reconstruction of flood exposure in 37 European countries and a new database of damaging floods since 1870. Our results indicate that, after correcting for changes in flood exposure, there has been an increase in annually inundated area and number of persons affected since 1870, contrasted by a substantial decrease in flood fatalities. For more recent decades we also found a considerable decline in financial losses per year.”

Lüning and Vahrenholt then go on to express their surprise that the DLF would present the scientific results so “honestly and without climate alarmist undertones.” and that “it is remarkable for today’s mainstream journalism”, which over the years tended to link every summer thunderstorm to Co2 emitted by man.

Next Lüning and Vahrenholt present studies showing that flooding in Central Europe and in the Alps region was even worse during the Little Ice Age than it is today, see here, here, here, and here.

The two German skeptic scientists examined the official data from the German DWD national weather service for Saxony Anhalt, and found the following: