As much of Germany’s nearly 30,000 strong fleet of wind turbines approach 20 or more years in age, the list of catastrophic collapses is growing more rapidly. The turbines are now being viewed by technical experts as “ticking time bombs”. 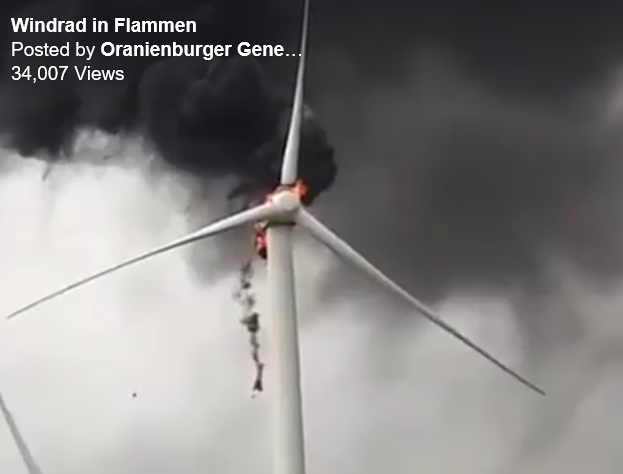 According to a commentary by Daniel Wetzel of online German Daily ‘Die Welt’, the aging rickety wind turbines are poorly inspected and maintained and thus are now posing a huge risk.

Over the past months alone there’s been a flurry of reports over wind turbines failing catastrophically and collapsing to the ground, e.g. see here, here and here.

As the older turbines age, their components and electronic control systems are wearing out and beginning to gravely malfunction. And according to Wetzel, these turbines are not even subject to strict technical monitoring by Germany’s TÜV (Technical Inspection Association), which provides inspection and product certification services.

In Germany industrial systems are required to regularly undergo technical inspections and approvals in order to ensure that they operate safely. However wind turbines are exempt from this strict requirement and so many wind park operators are neglecting to properly inspect, maintain and repair the systems, which is costly. And so it surprises no one that the aging turbines are beginning to fail catastrophically.

As a result, the TÜV is calling for turbines to be treated like any other industrial system, and be required to undergo rigorous inspections as well, Wetzel writes.

In 2016, near in the region of Paderborn, a 100-tonne turbine and its rotors plunged to the earth. The turbine was nearly 20 years old.

In another case, earlier this year, near Bochern, Wetzel reports, a brakeless 115-meter tall turbine spun wildly out of control before “two of the 56-meter blades “ripped to shreds ‘in a cloud of glass, plastic and fill material’.”

The debris from exploded turbine now poses a threat to the environment. The sharp fiberglass pieces injure grazing animals, says the Hanover School of Veterinary Medicine. “For cattle they can even perforate the stomach.”

Another hazard comes from the hundreds of liters of transmission oil the turbines that seep into the groundwater. Moreover the huge reinforced concrete foundations require tremendous energy for their manufacture and they penetrate deep into the ground, which adversely effects soil and groundwater.

The number of wind turbine disasters is mounting, reports Wetzel. Wind energy opposition group Vernunftkraft keeps a list, which has grown to be pages long. But the German Association of Wind Energy (Bundesverband Windenergie) downplays the incidents, calling them “isolated cases”.

Yet the situation has in reality grown so serious that TÜV is now urgently calling for rigorous inspections and regulations in order to assure operational safety.  TÜV expert Dieter Roas says that we dealing with “ticking time bombs.”

Wetzel writes that many turbines are now approaching their 20-25 year lifetimes and that extending their operating time should require technical approval.

The technical and structural integrity of the turbines in most cases is completely unknown.