Publishing her work in a new peer-reviewed scientific textbook, Dr. Indrani Roy, a solar and climate scientist, has determined there is a “robust solar signal on climate” with observational results affirming the solar signature on sea surface temperature and annual mean air temperature.

“This chapter focused on the detected robust solar signal on climate. It presented some observational results that identified solar signature on sea level pressure (SLP), sea surface temperature (SST) and annual mean air temperature. A technique of Multiple Linear Regression (MLR) methods was discussed, and a detected significant signal on SLP around Aleutian Low (AL) was analysed. A solar signal was observed around AL and Pacific High also using other techniques. In terms of SST, the region of tropical Pacific was addressed. One study noted an in-phase relationship between the Sun and tropical Pacific SST, and another study even observed a phase locking between those. A widely debated study that used the method of solar maximum compositing on tropical Pacific SST was presented discussing the methodology. …The recent study by White and Liu (2008), using the method of singular value decomposition (SVD) and compositing of nine solar cycles (period 1900–2000), even detected the phase locking of harmonics of the ENSO time series and the solar cycle.” 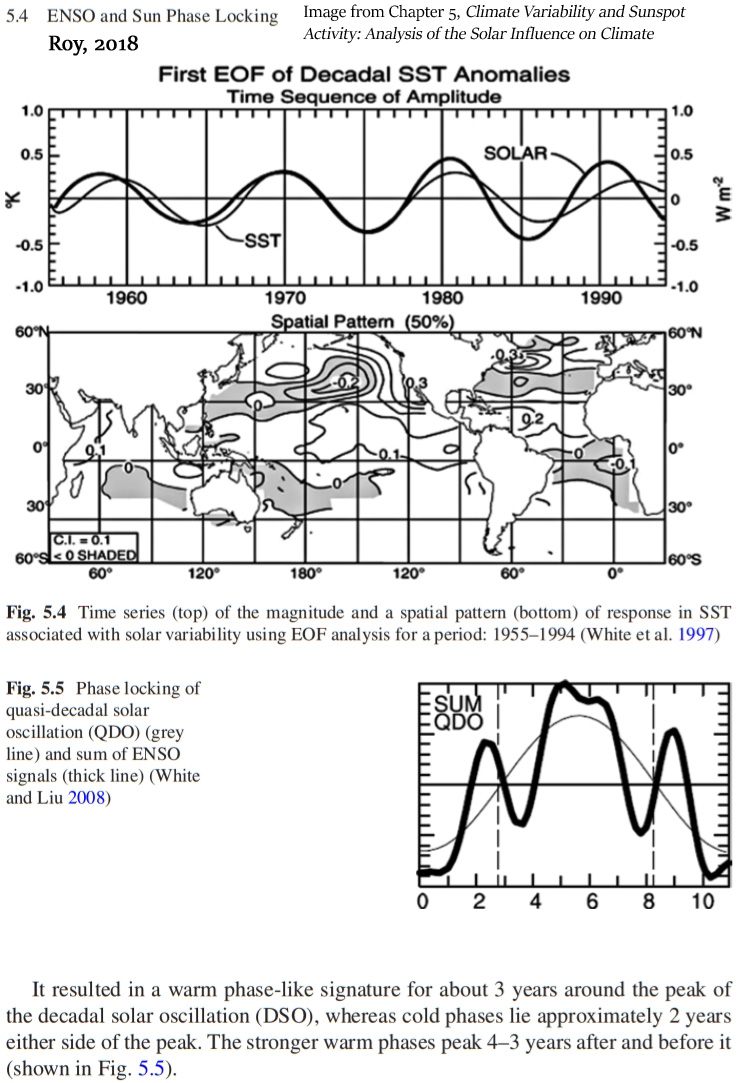 “The existence of the 11-year solar cycle signals in meteorological fields of the lower atmosphere/upper ocean has been detected in various observational analyses (Haigh 2003; Van Loon et al. 2007). However, the response found is latitudinal non-uniform and larger than would be expected from radiative forcing considerations alone. White et al. (1997), using EOF analysis of SST data, during the second half of the twentieth century, detected a leading mode of variability. Its spatial pattern suggests a warming around the eastern Pacific in the tropics which is accompanied by a cooling centred around the North Pacific (160°W and 30°N). The 11-year period is shown as lagging the solar cycle by ~1 year.”