On April 22, 2015, Katherine Hayhoe declared that permanent drought was the future for the Texas Panhandle and that part of the nation’s beef supply would get increasingly strained.

All the talk was about Texas having entered a state of permadrought with no relief in sight.

In his latest Weatherbell Satuday Summary, meteorologist Joe Bastardi brought up the once highly ballyhooed Texas megadrought, reminding us at the 2:15 mark how back in 2012 “prominent Texas climatologists” were claiming that the 3-year heat and drought had been part of climate change.

Since those doomsday proclamations were made by the climate experts, Bastardi shows how the dire predictions never cam to pass, and that the droughts have happened before in the 1950s, and were part of the natural Texas weather. 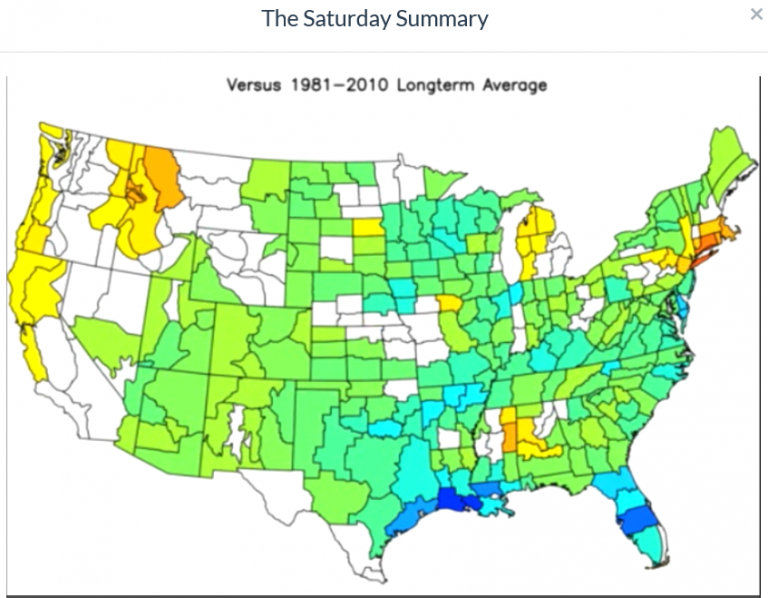 Joe Bastardi: “Does that look like a drought to you?” Source: WeatherBell.com, Saturday Summary, July 21, 2018.

No basis left for credibility

Like many skeptics who are aware of the desolate prediction track record climatologists have, Joe doesn’t understand how these climate experts still maintain any credibility at all. He says:

What I don’t get here is how people can make a forecast with something that was being made in Texas, prominent Texas climatologists were talking about a perma-drought coming, it goes the opposite way, and somehow or the other as soon as it gets hot and dry in Texas they’re out again, and they’re getting this credibility. At least question them – what happened to the last perma-drought?”

Yesterday I wrote about all the spectacular failed Arctic ice predictions made some 10 years ago. In real private industry where results actually count, such people would have been booted out long ago.