An accumulating collection of “headlines” taken from the 2018 scientific literature is indicating the Arctic region is no longer experiencing accelerated mass ice sheet/glacier loss, warming, or sea ice declines. 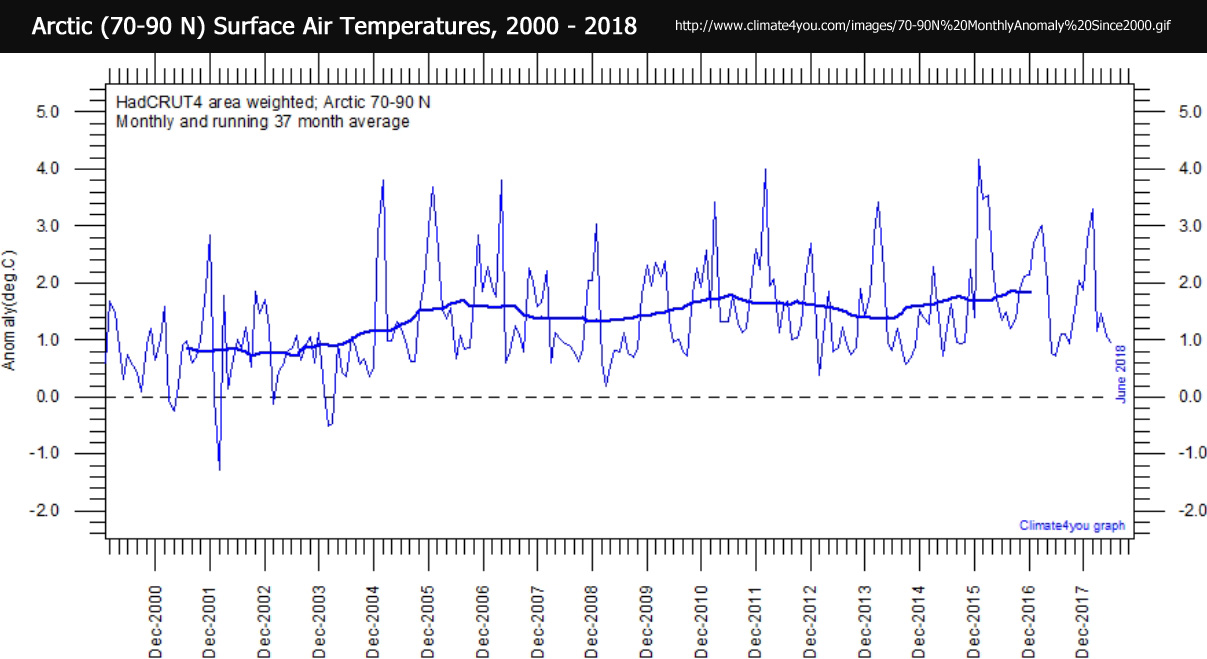 “Turning to the longer term evolution of JI (Fig. 5; time series location shown in Fig. 1), fitting a linear trend to the data suggests an annual acceleration since 2009 of ∼ 218 m yr−1 at Jif, diminishing inland to ∼ 128 m yr−2 at J1, and ∼ 102 m yr−2 at J2. Although this provides a simple characterization of the longer-term evolution in ice speed, it is clear from our time series that computing a linear trend does not capture the full decadal-scale variability in ice velocity. In particular, we note that much of the acceleration occurred between 2011 and 2013 (Fig. 5b and c), and since then there has been a notable absence of multi-annual acceleration as earlier records suggest (Joughin et al., 2014). Computing trends in ice velocity since 2012 near the glacier terminus (Jif), for example, shows a modest decline in speed of 321 m yr−2 over the 5-year period (Fig. 5b).”

“The calving front position migration has been suggested as the trigger to the stresses regimes variations and consequently the main driver to the JI velocity fluctuations (Joughin et al., 2008a, b, 2012, 2014; Bondzio et al., 2017). After a successive and gradually increased rate of ice front retreat until 2012 (Fig. 5a), the JI grounding line is now located on a higher bed location (Joughin et al., 2012; An et al., 2017). This may be acting to stabilize the grounding line, and in turn contribute to the glacier deceleration, although the main cause remains to be determined and further investigations is necessary.” 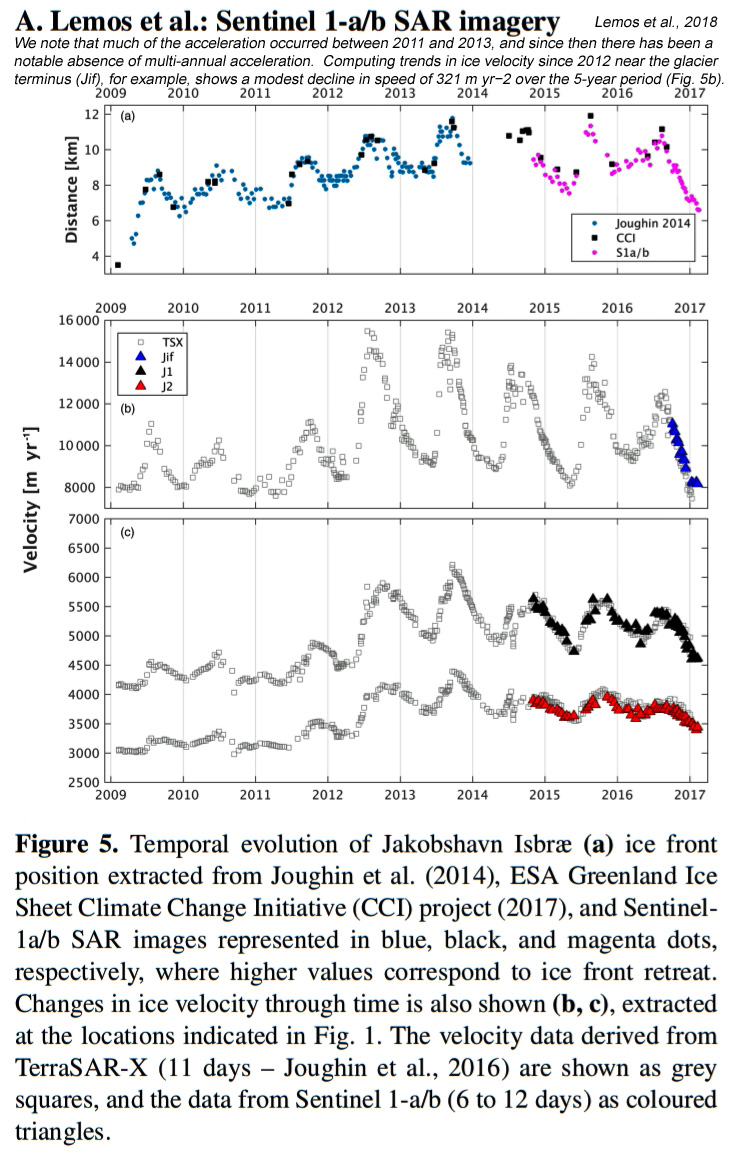 “High-resolution airborne gravity acquired at a low aircraft speed, with low ground clearance, combined with novel multibeam echo sounding data of the fjord helps resolve the bed topography and ice thickness of major outlet glaciers flowing into the ice-chocked Torssukatak Fjord in central West Greenland. The results explain the exceptional stability of two large glaciers over the last 1.5 century, despite the presence of warmer ocean waters in the fjord since the mid-1990s, because the glaciers are protected from the ocean by sills at the end of deep (700 m) fjords. The retreat of these glaciers from the deep fjords to the sills precedes year 1851.”

“In this study, we reconstruct the timing and pattern of middle- and late-Holocene GrIS [Greenland Ice Sheet] margin fluctuations at two locations, ~190 km apart, in central West Greenland using radiocarbon-dated sediment cores from proglacial-threshold lakes. Our results demonstrate that deglaciation occurs at both sites during the early Holocene, with the ice sheet remaining in a smaller-than-present ice margin configuration until ~500 years ago when it readvanced into lake catchments at both sites.”

“Historical and remote-sensing records indicate that Nordenskiöld Gletscher has been stable or advancing since AD 1950 (Weidick, 1968, 1994). This evidence, in addition to the lack of a moraine or trimline marking the culmination of the late-Holocene advance fronting the ice margin, as occurs across much of the region, infers that the system is at or is still advancing to its late Holocene maximum extent.”

“We note the difference between the ice margin locations on the laterals versus the terminus relative to the late-Holocene maximum position and attribute this to deepening of the glacial trough as described by Kaplan et al. (2009). In fact, observations at the terminus of Nordenskiöld Gletscher in 2013 documented that the terminus is currently advancing onto living tundra.”

“Glaciers and ice streams drain the ice from the ice sheets to the ice shelves, and contribute to global sea-level changes. Therefore, ice velocity is an essential parameter for the assessment of mass balance. … The results show that the estimated velocity obtained by the use of the proposed method is superior to the other methods, and the long-term series of ice velocity measurements shows that the ice velocity in the Amery Ice Shelf has hardly changed over the past 45 years (1968–2014). We conclude that the ice flow velocity of the Amery Ice Shelf has showed a slight deceleration over the past 45 years.”

• Warming Hiatus Since 2005 At An Arctic-Representative Site

“[W]e find that there was a warming hiatus/slowdown since 2005 at Ny-Ålesund. Additionally, the variation of air temperature lags by 8–9 years, which implies that the warming hiatus probably exists in the Arctic but lags behind, globally. This phenomenon is not an isolated instance, An et al. [2017] reported that the warming rate above 4000 m of the Tibetan Plateau has been slowing since the mid-2000s. In the Antarctic Peninsula, the slowdown of the increasing temperature trend was also found after 1998/1999, however, the reason is attributed to local phenomena, such as the deepening of Amundsen Sea Low and not due to the global hiatus [Turner et al., 2016].”

“From the correlation analysis, we found Ny-Ålesund could represent most Arctic areas, especially the Atlantic-Arctic sector.”

“Especially air temperature, the record of Ny-Ålesund can capture the variation of surface temperature over most of [the] Arctic.”

“The oscillations of atmospheric dynamic systems, the methods of energy transport from low to high latitudes, and feedback mechanisms of the Arctic on climate change may contribute to the warming hiatus.”

“[C]limate changes in polar areas remain difficult to predict, which indicates that the underlying mechanisms of polar amplification remain uncertain and debatable.”

“The authors examined the variability of activity of modern glaciation and variation of natural conditions of the periglacial zone on climate and on dendrochronological data. Results of larch and Siberian stone pine growth data were revealed at the higher border of forest communities. It is believed that the temperature could be 3.5 °C warmer at the Holocene optimum than at the present time(Vaganov and Shiyatov 2005).”

• “A Cooling Is Observed During The Last 15 Years”

“Here we quantify trends in satellite-derived land surface temperatures and modelled air temperatures, validated against observations, across the entire ice-free Greenland. … Warming trends observed from 1986–2016 across the ice-free Greenland is mainly related to warming in the 1990’s. The most recent and detailed trends based on MODIS (2001–2015) shows contrasting trends across Greenland, and if any general trend it is mostly a cooling. The MODIS dataset provides a unique detailed picture of spatiotemporally distributed changes during the last 15 years.”

“Figure 3 shows that on an annual basis, less than 36% of the ice-free Greenland has experienced a significant trend and, if any, a cooling is observed during the last 15 years (<0.15 °C change per year).”

“We monitored 1,378 nests of western sandpipers, semipalmated sandpipers, and red‐necked phalaropes at a subarctic site during 1993–1996 and 2010–2014. … We found an unexpected long‐term cooling trend during the early part of the breeding season. Three species delayed clutch initiation by 5 days in the 2010s relative to the 1990s.”

“A cooling trend occurred during the prelaying windows of all species, resulting in daily mean temperatures that averaged 4.9, 5.8, and 4.4°C cooler during the 2010s than the 1990s for western sandpiper, semipalmated sandpiper, and red‐necked phalaropes, respectively.” 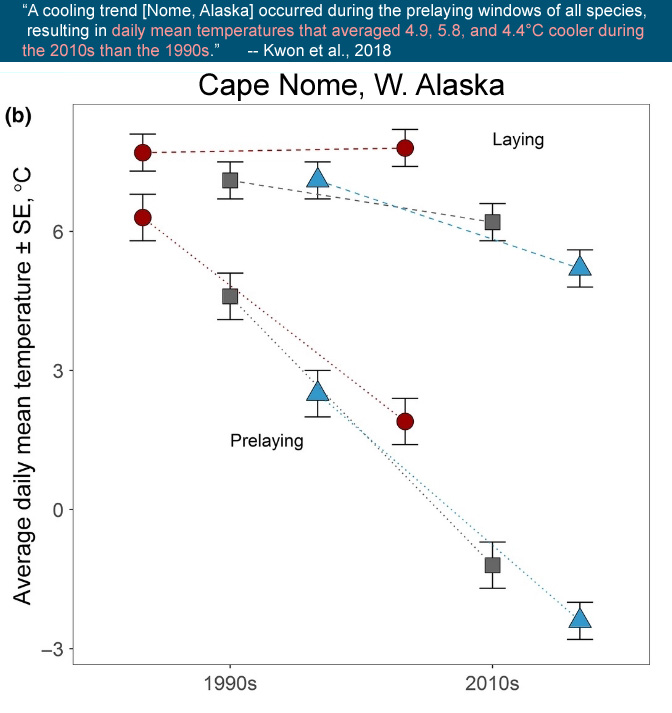 “The AO [Arctic Oscillation] has positive and negative phases that infuence broad weather patterns across the northern hemisphere (Thompson et al. 2000). For example, during the positive phase of the AO, atmospheric pressure over the Arctic is lower than average, which tends to result in warmer and wetter winters in northern regions as warmer air is able to move further north (Thompson et al. 2000; Aanes et al. 2002).”

• Summer Temperature “Cooling In The Past 200 Years”

“The three historical moraine crests indicate that there were at least three ice-margin stillstands or advances during historical time. Summer temperature records from North lake (Axford et al. 2013) and Lake N3 (Thomas et al. 2016) broadly register cooling in the past 200 years in western Greenland, which likely influenced the advance to the historical moraines.” 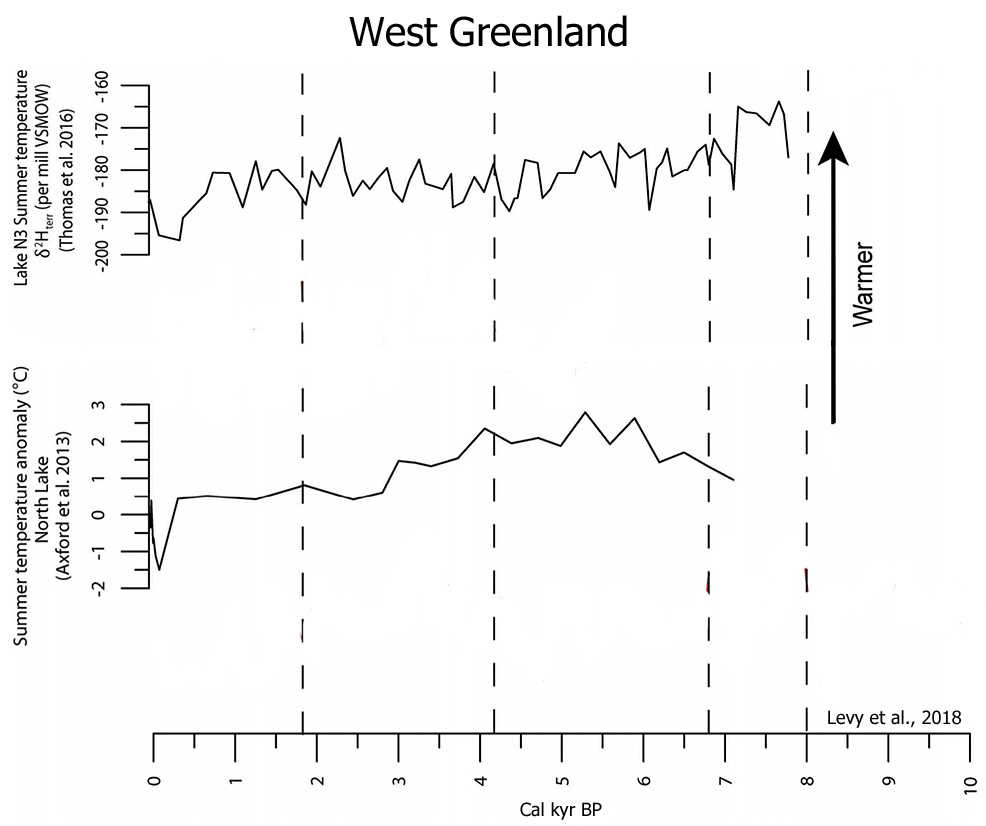 Extending this non-trend another 4 years, there has been no detectable trend in September Arctic sea ice during 2007-2017. 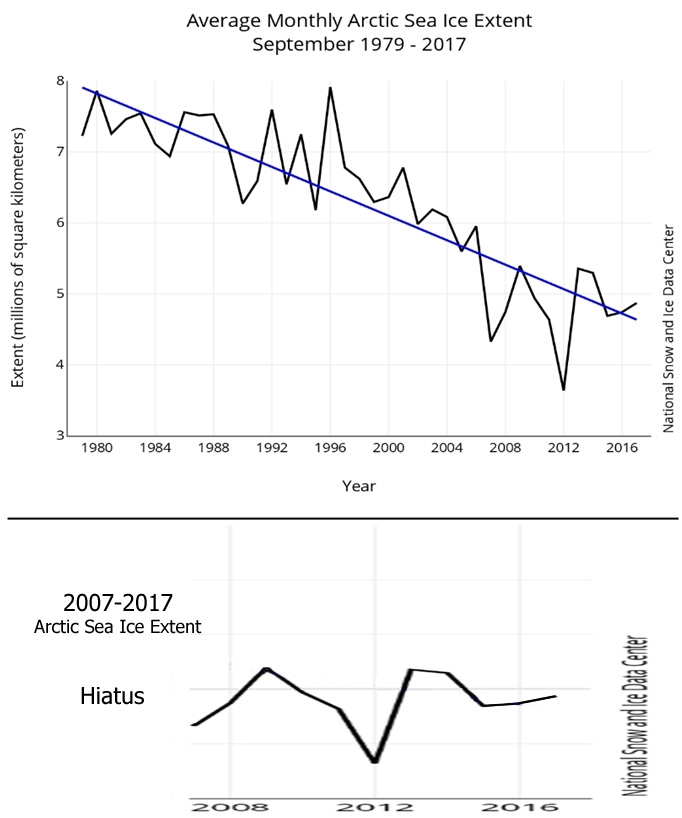 “In our study, we quantify the interannual variability of sea ice thickness in the Bay of Bothnia during the years 2003-2016.” 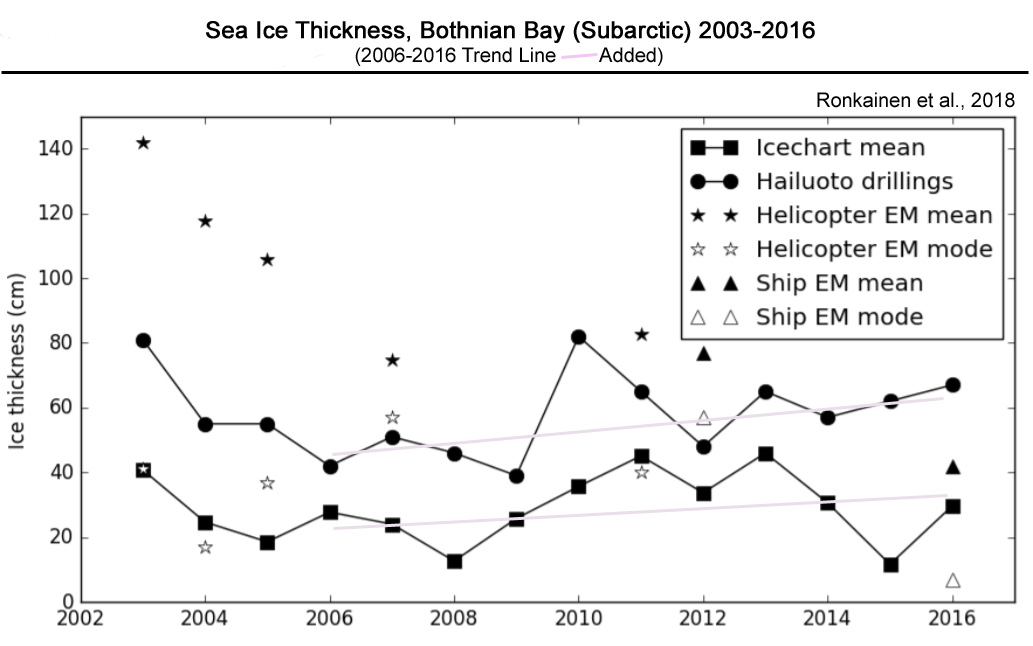 “We present a continuous time series of in situ measurements from the N‐ICE2015 expedition from January to June 2015 in the Arctic Basin north of Svalbard, comprising snow buoy and ice mass balance buoy data and local and regional data gained from electromagnetic induction (EM) surveys and snow probe measurements from four distinct drifts. The observed mean snow depth of 0.53 m for April to early June [2015] is 73% above the average value of 0.30 m from historical [1955, 1970s] and recent observations in this region, covering the years 1955–2017.” 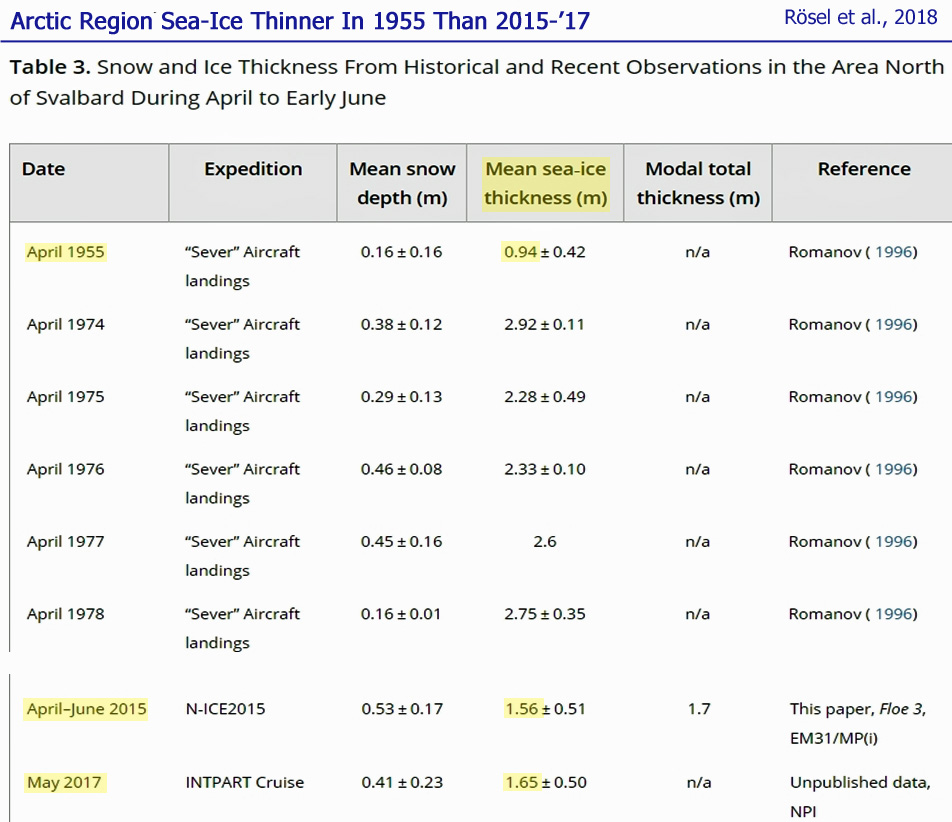 “From 2007 to 2013, the southeastern Bering Sea was dominated by extensive sea ice and below-average ocean temperatures. In 2014 there was a shift to reduced sea ice on the southern shelf and above-average ocean temperatures. These conditions continued in 2015 and 2016. … Historically, the dominant parameters controlling sea-ice extent are winds and air temperature, with the persistence of frigid, northerly winds in winter and spring resulting in extensive ice. After mid-March 2014 and 2016 there were no cold northerly or northeasterly winds. Cold northerly winds persisted into mid-April in 2015, but did not result in extensive sea ice south of 58°N. The apparent mechanism that helped limit ice on the southeastern shelf was the strong advection of warm water from the Gulf of Alaska through Unimak Pass. This pattern has been uncommon, occurring in only one other year (2003) in a 37-year record of estimated transport through Unimak Pass.”

“During years with no sea ice on the southern shelf (e.g. 2001–2005, 2014–2016), the depth-averaged temperature there was correlated to the previous summers ocean temperature. … This latest string of three warm years apparently ended this year (2017). In March, sea ice had covered M4, and the ice edge was near or at M2 on 13 March 2017, but by June 2017 the depth-averaged temperatures at M2 were average, indicating that ocean temperature near M2 in 2017 (like the 2006 transition between the previous warm and cold stanzas) will likely be average. With this end of a warm stanza, questions arise. Will the Bering Sea continue in a pattern of warm/cold stanzas?” 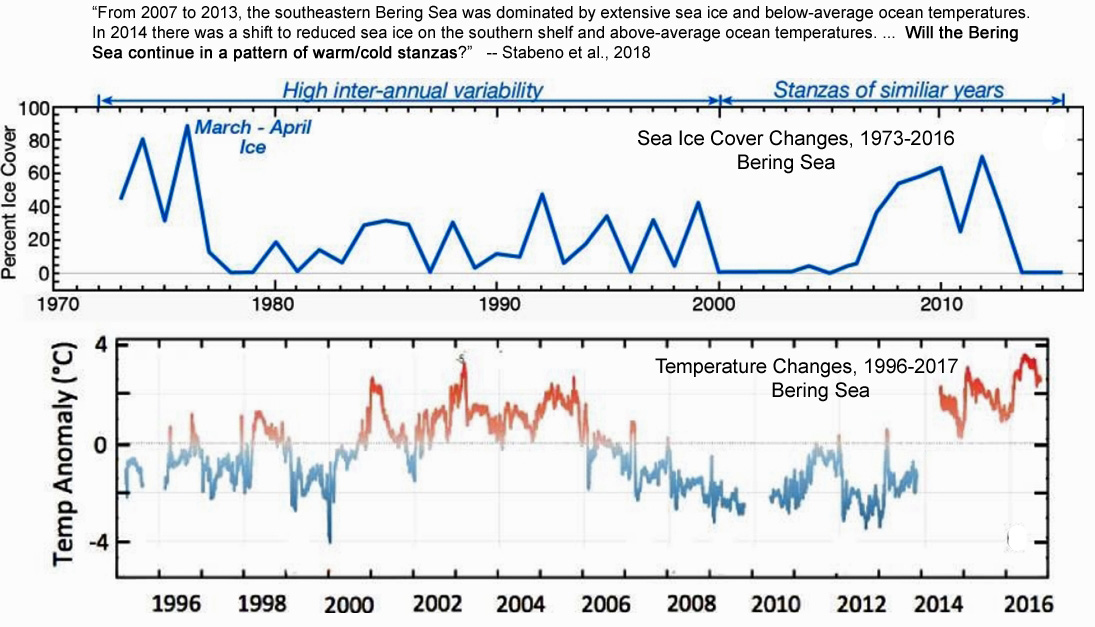