A software engineering expert and leading blogger on climate analyzed the “How Much Hotter Is Your Hometown Than When You Were Born?” page by the New York Times and concludes it’s a “massive fraud”. Tony Heller’s Youtube video analysis so far has been viewed over 12,000 times since it came online two days ago.

Software engineering expert and publisher of the wildly popular Real Climate Science blog Tony Heller recently analyzed a web page by the New York Times that supposedly allows a reader to find out how much hotter his/her hometown is today than when he/she was born. Heller presents his findings in the following video:

In the video Heller exposes a number of grave and fatal infractions and says the New York Times page is fraught with deception. So massive are the transgressions that Heller concludes the page is “climate fraud”.

One example Heller cites is the starting point the New York Times uses for its data: 1960. The award-winning software expert asks why it starts only at 1960 when the US climate data goes way back to before 1900. Here Heller uncovers the reason: It’s because the weather in the US back in the early part of the 20th century was in fact much hotter than it is today, and the New York Times doesn’t want its readers to see it.

The following chart shows the percentage of days above 90°F for all temperature stations in the US: 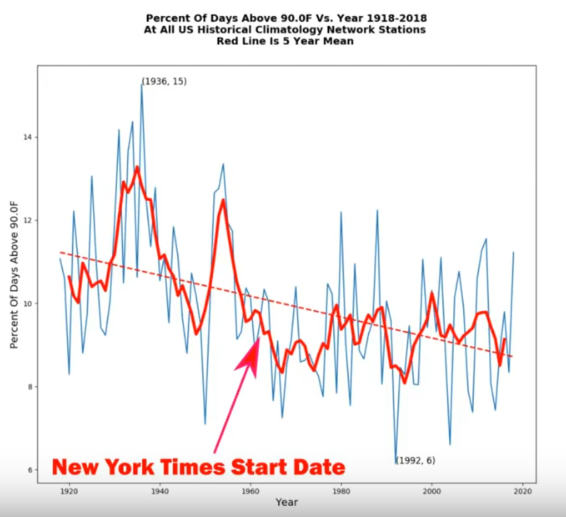 According to Heller: “No wonder the New York Times pretends there’s no data before 1960. It completely wrecks their global warming scam.”

Going back further — for example to the 1930s — would show readers that it was in fact hotter in the US back then than it is today. That’s the last thing the New York Times wants its readers to know.

New York Times claims are opposite of reality

The New York Times page informs readers how many 90°+F days your hometown saw when you were born, and how many you can expect today and in the future. So Heller uses the example of Mt. Vernon, Illinois (2:30 mark) as an illustration. For Mt. Vernon, the New York Times claims we saw about 30 days of 90°F or higher back in 1960, and that today one could expect 41 such hot days.

But when Heller compared the New York Times claim to the real recorded data, he found the Times results were in fact completely wrong.

The New York Times also claims that the trend of more hot days in Mt. Vernon will continue upwards. The following is a blow-up of a part of a chart presented by Heller, with arrows added to compare the real and New York Times trends: 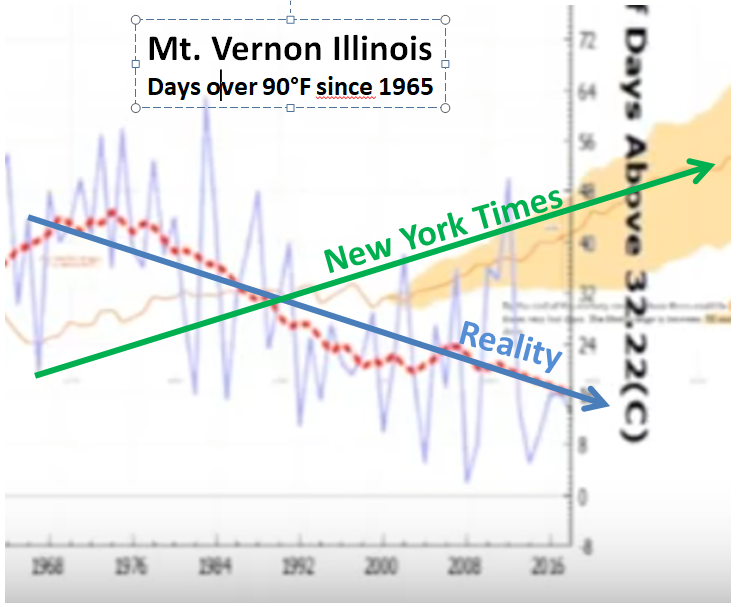 Heller says: “The first thing to notice is the New York Times data from 1960 to the present is fake.”

The veteran software engineer and data analysts believes: “Now it becomes obvious why the New York Times is hiding all temperatures before 1960 – because it was really hot back then. If they start at 1960, they can kind of pretend that the number of 90° days is going up. The New York Times is committing massive fraud.”

Heller adds that the the people at the Times “show no interest in telling the truth.” and “want to deceive its readers.”

No correlation between hot days and atmospheric CO2

Heller also presents a scatter diagram depicting the number of 90°+F days in the US vs atmospheric CO2 concentration: 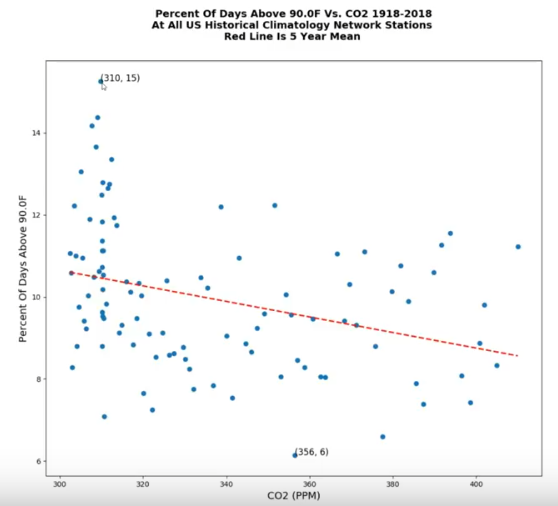 The chart above shows that the number of hot days has decreased instead of increasing, i.e. no correlation with CO2.

Heller also points out that the number of 100°F days occurring in September in the US has also declined, but the New York Times doesn’t want the readers to know about that as well.