Retired German meteorologist Klaus-Eckart Puls presents an analysis of Germany’s hot and dry summer this year at The European Institute for Climate and Energy (EIKE).

This summer produced a number of blaring headlines which claimed the unusually warm and dry weather was an undeniable sign of things to come. Climate experts warn that summers in Germany will certainly get hotter and droughts will become increasingly common, along with episodes of heavy rainfall accompanied by destructive high water.

No trend towards droughts

However, the veteran meteorologist points out that weather services around the world and even the IPCC have yet to detect any real trends, especially for Central Europe, namely Germany:

Using data from the German DWD national weather service, a plot of summer precipitation in millimeters for Germany was and follows:

For the summer of 2018, it is estimated that Germany will see a mean precipitation of 128 mm, which will be slightly above the 124 mm record low seen way back in 1911. Summer precipitation has in fact been trending upwards over the past 30 years.

The above chart shows that there has been no trend in precipitation for Germany since systematic measurements began in 1881.

And when analyzing the data for the period known as early summer (May, June , July), then we see that there has been a slight long term increase in precipitation for Germany since 1881: 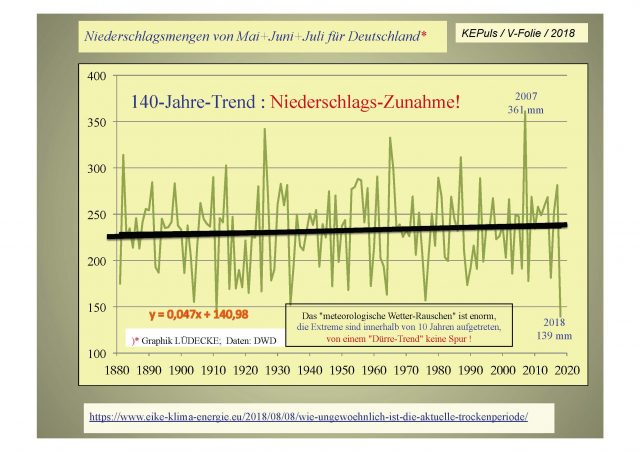 Klaus-Eckart Puls also cites the IPCC concerning global trends for drought: no trend [10]. According to the the IPCC:

There is low confidence in a global-scale observed trend in drought or dryness“.

To the south in Austria, the summer was also dry, but was only came in the Top 20 driest, according to the Austrian ZAMG national weather service.

Posted in Drought and Deserts | 3 Responses