In the wake of Florence, climate ambulance chasers have been making wild exaggerations and claims.

For example, the Washington Post editorial board claimed President Trump and climate change deniers were “complicit” in Florence because they play down humans role in increasing the risks our obstruction of addressing those risks.

Of course this is just the latest pathetic effort to criminalize climate science dissenters.

Meanwhile CNN even claimed there’s been a 40% increase in extreme storms since 1950, hat-tip Ryan Maue, who commented:

CNN has a great weather coverage team in Atlanta … but network in past has a checkered record on climate science using Bill Nye as their expert. Lol!

Now, they just outsource it to the political team in NYC. Mostly poorly sourced gibberish. They can do better. pic.twitter.com/GwwGj8GUBR

In a nutshell, climate alarmists will say anything, no matter how absurd, to make the junk science look real. It’s time to come to terms with the reality that the mainstream media often deceives the public.

If climate skeptics are complicit in Florence, then on the other side of the coin skeptics also have to be responsible for the hurricanes that fizzle out.

At Friday’s Daily Update, veteran meteorologist Joe Bastardi posed a question to the climate ambulance chasers and folks at the Washington Post: “How come Florence didn’t intensify more? How come Isaac is falling apart at the heart of the hurricane season? […] How come everything is dying? There’s so much more than just simplistic arguments that are done for agendas.” 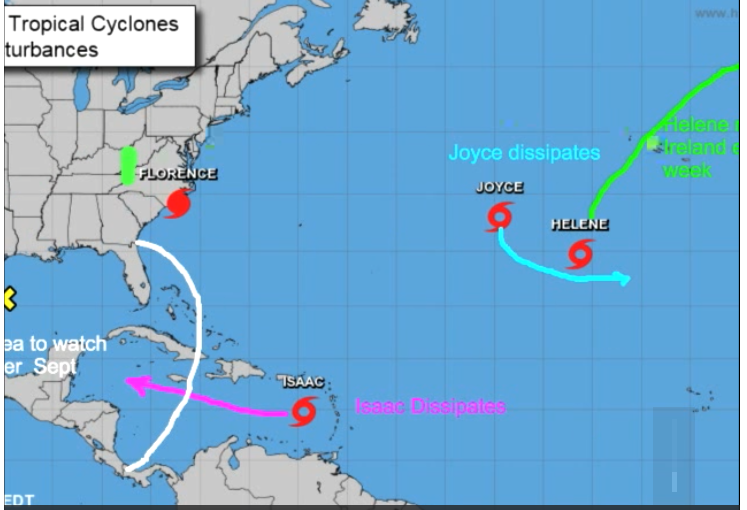 Often things just don’t work out the way the alarmists would like them to. And so they need to resort to less than honest tactics to convey drama over to the audiences.

Bad weather reporting has recently seen a series of blatant exaggerations aimed at making viewers think things are much worse than they really are.

This year’s 2018 Media Bad Weather Exaggeration Award has to go to Hurricane Florence reporter Mike Seidel below of The Weather Channel:

And what follows are winners from previous years. Of course this is not to say that extreme weather can be taken lightly. But it would be nice if reporters stayed accurate. Their credibility is already pretty ruined and such antics don’t help.

One blooper comes from an MSNBC reporter covering the extreme conditions from tropical storm Hanna back in 2008:

What follows is my favorite, Hurricane Irene in 2011:

Next is Ryan Maue’s favorite — well, at least it’s one he brought up recently. In October, 2005, reporter Michelle Kosinski is using a canoe when a regular pair of rubber boots would have sufficed. Can we believe anything we see on our screens?

It’s got to be frustrating when people totally ruin your dramatic story of danger and peril. The next video is of Hurricane Sandy in Atlantic City, New Jersey, 2012…CNN embarrassed again: