Another new false-alarm paper reveals that coastal wetlands may not only persist well into the 21st century despite present rates of sea level rise, but the coasts may expand and even prosper due to the natural ability for soil to “build up vertically by sediment accretion”. 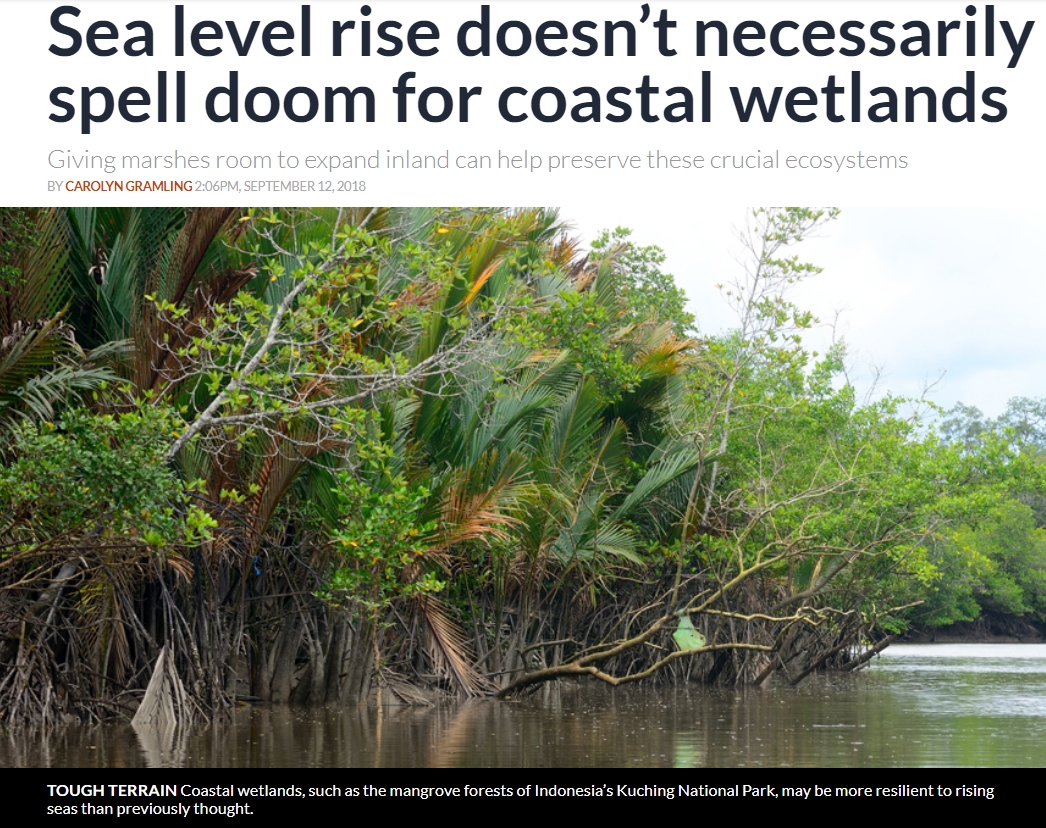 “Coasts are growing all over the world”

Two years ago, a ground-breaking paper was published in the journal Nature Climate Change indicating that the Earth’s shorelines have been growing overall since the mid-1980s (Donchyts et al., 2016).

In other words, because “coasts are growing all over the world”, there is more land area above sea level today than there was 30 years ago.

Kench et al., 2018 examined “101 islands in Tuvalu over the past four decades (1971–2014)”, a period in which local sea level has risen at twice the global average.  They found a “land area increase in eight of nine atolls.”

“Surprisingly, we show that all islands have changed and that the dominant mode of change has been island expansion, which has increased the land area of the nation. … Using remotely sensed data, change is analysed over the past four decades, a period when local sea level has risen at twice the global average [<2 mm/yr-1] (~3.90 ± 0.4 mm.yr−1). Results highlight a net increase in land area in Tuvalu of 73.5 ha (2.9%), despite sea-level rise, and land area increase in eight of nine atolls.” (Kench et al., 2018)

Coastal marsh area has been stable or expanding

Kirwan et al., 2016 reported that coastal marshes and their “vulnerable” ecosystems are not only persisting despite present-day sea level rise, coastal marsh area has generally been stable or expanding.

In fact, it was claimed that sea level rise rates of 10-50 mm/yr (1 to 5 meters per century) during the 21st century would not be substantial enough to submerge the globe’s coastal marshes.

“Coastal marshes are considered to be among the most valuable and vulnerable ecosystems on Earth, where the imminent loss of ecosystem services is a feared consequence of sea level rise. However, we show with a meta-analysis that global measurements of marsh elevation change indicate that marshes are generally building at rates similar to or exceeding historical sea level rise, and that process-based models predict survival under a wide range of future sea level scenarios. We argue that marsh vulnerability tends to be overstated because assessment methods often fail to consider biophysical feedback processes known to accelerate soil building with sea level rise, and the potential for marshes to migrate inland. … In summary, dynamic models of marsh vertical accretion indicate that marshes will generally survive relative SLR rates of 10–50 mm yr−1 during the twenty-first century, depending on tidal range and suspended sediment availability.” (Kirwan et al., 2016)

Coastal wetlands may not be threatened by sea level rise

Adding yet another layer to the strengthening conclusion that global sea levels aren’t rising fast enough to “spell doom” to “vulnerable” coastal ecosystems and communities, Schuerch et al. (2018) find that the natural ability of coastal wetlands to “build up vertically by sediment accretion” could potentially lead to “wetland gains of up to 60 per cent of the current area“.

“Rising sea levels don’t have to spell doom for the world’s coastal wetlands. A new study suggests salt marshes and other wetlands could accumulate soil quickly enough to avoid becoming fully submerged — if humans are willing to give them a little elbow room. … The new study builds on previous work that suggests rising seas will increase sediment buildup in some parts of coastal wetlands. This increased sediment, as well as human adaptations to allow wetlands to move inland as the seas rise, could allow the coastal fringes to not only survive but to increase their global area by as much as 60 percent.” (Sciencenews press release for Schuerch et al., 2018) 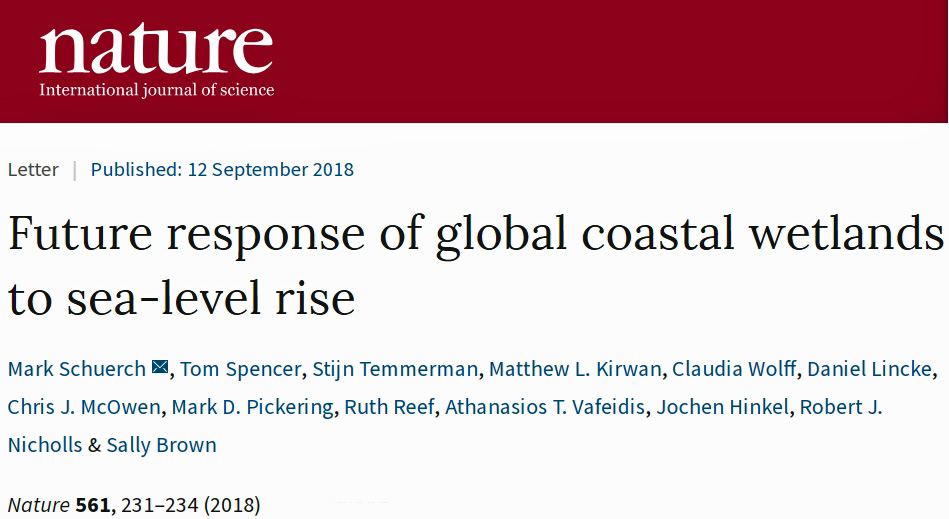 “On the basis of our simulations, we find that, globally, rather than losses, wetland gains of up to 60 per cent of the current area are possible, if more than 37 per cent (our upper estimate for current accommodation space) of coastal wetlands have sufficient accommodation space, and sediment supply remains at present levels.”

“[W]e project that until 2100, the loss of global coastal wetland area will range between 0 and 30 per cent, assuming no further accommodation space in addition to current levels. Our simulations suggest that the resilience of global wetlands is primarily driven by the availability of accommodation space, which is strongly influenced by the building of anthropogenic infrastructure in the coastal zone and such infrastructure is expected to change over the twenty-first century. Rather than being an inevitable consequence of global sea-level rise, our findings indicate that large-scale loss of coastal wetlands might be avoidable, if sufficient additional accommodation space can be created through careful nature-based adaptation solutions to coastal management.”