Schneefan (Snow Fan) at German skeptic site wobleibtdieerderwaermung.de here recently posted an overview of Arctic sea ice. This summer as well has Arctic sea ice refused to obey all the claims of melting.

The above chart shows August mean Arctic sea ice area in million square meters from 1979 to 2018 (red curve). There’s been a positive linear trend since 2007.

Moreover, the upward linear trend has even sharpened since 2012 (green lines) since Al Gore and Peter Wadhams made their absurd projections there would be an ice-free Arctic by now.

Kirye at KiryeNet here shows that current Arctic sea ice volume for mid September remains at the center of the pack, and thus no sign of short-term dwindling Arctic sea ice: 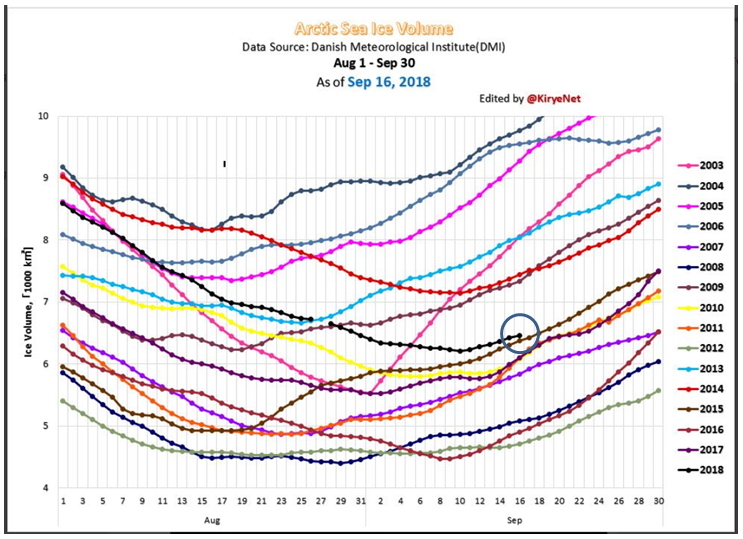 The Northwest Passage this year as well was continuously blocked by ice and thus impassable for the entire year.

But some refused to believe the ice was not melting. For example German Yacht Online here reported how a crew on the yacht “Anahita” had ignored warnings of the Canadian Coast Guard and tried to cross the Passage. By late August the yacht ended up getting crushed by sea ice and sank within minutes. The 2-man crew was forced to escape on the ice by foot and were later airlifted to safety by helicopter.

According to Yacht online: “The ‘Anahita’ was one of a dozen other yachts on the way from the east to the west through the Northwest Passage. However this summer the sea ice in the Arctic remained tenacious.”

Also a group of publicity seeking climate activists on Russian ice breaker/expedition ship ‘Akademik Ioffe’ were forced to move their starting point about 1000 km to the south to Kugaaruk. Just hours after starting on August 24, 2018, the vessel “ran aground on an uncharted shoal” and all passengers had to be rescued.

The trip was supposed to focus the world’s attention on global warming and “disappearing” Arctic sea ice. However, the expedition ended up being an embarrassment and ironically showed the opposite: the Arctic still had quite some ways to go before becoming ice-free.

All passengers on the Akademik Ioffe were safely transferred to shore and returned home, the site informs.

According to the website, the expedition was abandoned because the Akademik Ioffe needed repair after it had run aground and been refloated.

The expedition itself insisted the mission was not curtailed due to ice conditions and instead blamed “an uncharted geologic feature”. But why would a ship need to enter an uncharted area? Maybe because ice was blocking the usual route?

Today “Akademik Ioffe“ is back on the way to Les Mechins, Quebec from Kugaaruk and the expedition is postponed to summer 2019.