Many of you are aware that I’m also a big skeptic of the western dietary guidelines we’ve been handed down by the government over the past decades.

Claiming a vast consensus among nutritionists and physicians, government insisted the high carb, low fat diet was the healthiest. Well we all know how that all turned out. Pretty catastrophic!

Only now, after tens of millions of heart attacks and a global epidemic of diabetes, are nutrition skeptics finally getting heard. Yet these skeptics, believe it or not, are still getting trolled even after it has become crystal clear they were right all along.

One skeptic doctor, Dr. Darren Schmidt, was even compelled to produce a video on trolling after having put up with it for so long: How Trolls Troll.

In his video he produces a list of things to keep in mind when confronted by trolls, and tips on how to deal with them effectively.

These tips of course apply to climate science, where skeptics are continuously trolled by alarmist bedwetters who insist the climate and planet are in crisis and refuse to hear or believe anything to the contrary.

The trolling described in the video will remind readers of the trolling that we often see at NoTricksZone and elsewhere.

What follows are cropped images of Dr. Schmidt’s list spliced together: 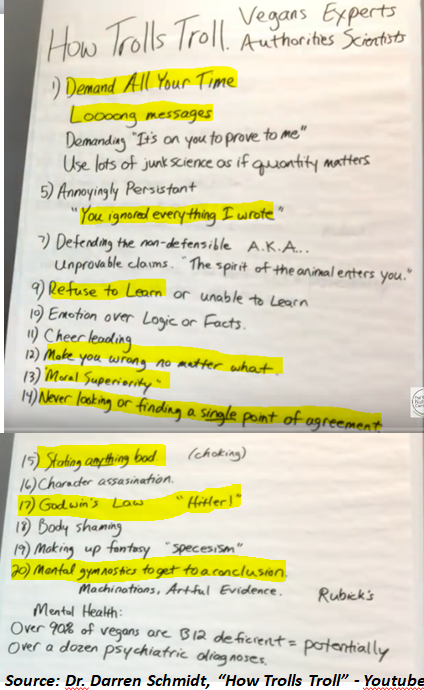 As you will notice, trolling uses the same playbook in climate science, e.g.: