Syria War Has Little To Do With Manmade Climate Change, Recent Publications Show

Again and again activist climate scientists claim the Syria war and the associated wave of refugees are a consequence of climate change. But they do not provide proof, and so it remains a claim.

Tobias Ide from the Brauschweiger Georg Eckert Institute for International Textbook Research has reviewed the arguments and reaches the conclusion that climate change as the main cause is still unconfirmed. In this respect, all claims to the contrary are on shaky ground.

Climate War in the Middle East? Drought, the Syrian Civil War and the State of Climate-Conflict Research
This article reviews existing evidence for a climate-conflict link in Syria and examines how the respective debate reproduces three important shortcomings of climate-conflict research. The potential climate-conflict link for Syria can be conceived of as a four-stage process, with various levels of scientific evidence and consensus existing for each stage: (1) climate change inducing the heavy 2006–2009 drought (plausible, but not proven); (2) massive loss of agricultural livelihoods, significantly attributable to the drought (supported by a majority of studies, but contested); (3) massive rural-to-urban migration triggered by livelihood loss in combination with other factors (supported by a majority of studies, but contested); and (4) migration intensifying existing grievances and facilitating the onset of protests and the subsequent civil war (possible, but little knowledge exists). The debate about the Syrian case reproduces three important shortcomings of climate-conflict research: limited dialogue between different methods, an overstatement of differences, and a lack of theoretical engagement. These shortcomings also have adverse impacts in terms of policy advice.

This article firstly reviewed the available literature on climate change and the onset of civil war in Syria in 2011 while considering four stages of a purported causal link: climate change to drought, drought to livelihood loss, livelihood loss to migration, and migration to conflict. Although Syria faced a multi-decadal drying trend and the 2006–2009 drought was unusually severe, comprehensive evidence through attribution studies of a (probabilistic) link to climate change is still lacking. Whether the drought was a relevant cause of rural livelihood loss and whether this livelihood loss facilitated a significant migration to urban areas remains contested, although the majority of studies support these claims. Currently, we know little about whether, and if so how, this migration contributed to the onset of the anti-regime protests in 2011 and the associated civil war.”

It would also have been nice if Ide had taken the natural climate variability of the last 2,000 years into account. Even if the drought years 2006-2009 had been a co-trigger, in the climate-historical context it is a completely recurring phenomenon.

Look at the column on the far right in the figure below. It depicts the change in rainfall over the past 4000 years in the Eastern Mediterranean. Peaks to the left indicate drought phases: 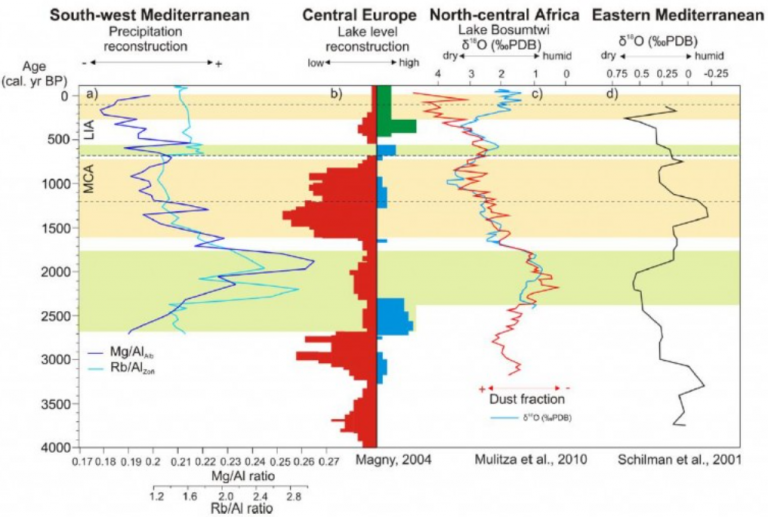 9 responses to “Syria War Has Little To Do With Manmade Climate Change, Recent Publications Show”