The Sea of Galilee is significant for the Christian and Jewish faiths, and recently there have been reports that it too likely has fallen victim to manmade global warming. Jesus won’t be able to walk on water anymore!

For example, the following video reports that it is “drying up” and has reached its “lowest level in 100 years”, due to prolonged drought (which alarmists will blame on CO2).

But new findings in a very recent paper by Michael L. Wine et al show that the climate change claim is more myth than reality.

The authors remind that lakes “are disappearing on all inhabited continents due to numerous factors” and that past scientific work “mistakenly implicated drought” with the Sea of Galilee’s shrinkage. The authors point out that much of the global shrinking lakes problem goes back to mismanagement. The authors write:

In fact, agriculture and flow diversion are primary causes of lake shrinkage.”

In water-limited regions worldwide, climate change and population growth threaten to desiccate lakes. As these lakes disappear, water managers have often implicated climate change-induced decreases in precipitation and higher temperature-driven evaporative demand—factors out of their control, while simultaneously constructing dams and drilling new wells into aquifers to permit agricultural expansion. One such shrinking lake is the Sea of Galilee (Lake Kinneret), whose decadal mean level has reached a record low, which has sparked heated debate regarding the causes of this shrinkage. However, the relative importance of climatic change, agricultural consumption, and increases in Lebanese water consumption, remain unknown. Here we show that the level of the Sea of Galilee would be stable, even in the face of decreasing precipitation in the Golan Heights. Climatic factors alone are inadequate to explain the record shrinkage of the Sea of Galilee. We found no decreasing trends in inflow from the headwaters of the Upper Jordan River located primarily in Lebanon. Rather, the decrease in discharge of the Upper Jordan River corresponded to a period of expanding irrigated agriculture, doubling of groundwater pumping rates within the basin, and increasing of the area of standing and impounded waters. While rising temperatures in the basin are statistically significant and may increase evapotranspiration, these temperature changes are too small to explain the magnitude of observed streamflow decreases. The results demonstrate that restoring the level of the Sea of Galilee will require reductions in groundwater pumping, surface water diversions, and water consumption by irrigated agriculture.” 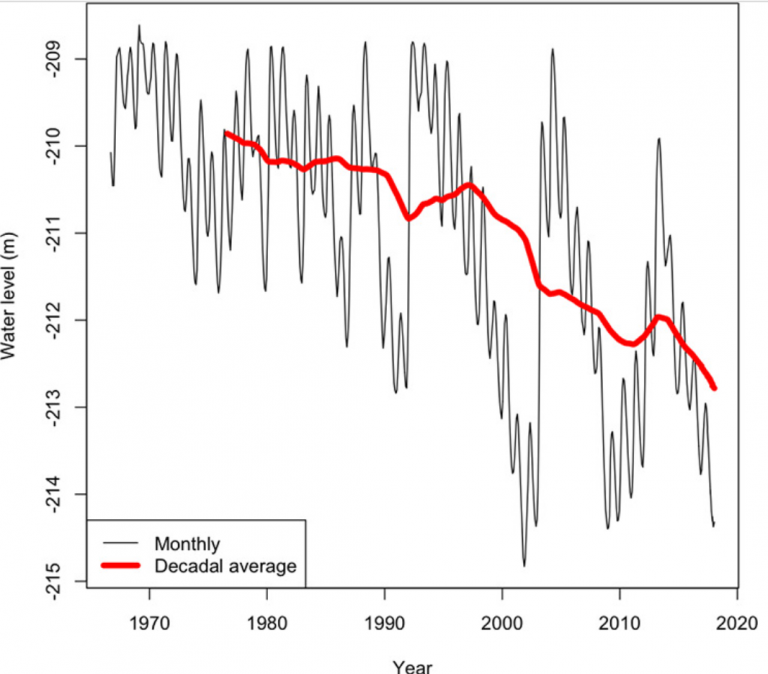 Sea of Galilee levels have reached a record low, but drought and climate change have little to do with it. Chart: Wine et al (2018).
;