University of Exeter: Role of natural climate factors is underestimated

Pioneering new research has given a new perspective on the crucial role that ‘natural factors’ play in global warming. The study, by Dr Indrani Roy at the University of Exeter, suggests that the natural phenomena such as solar eleven-year cycles and strong volcanic explosions play important roles in recent climate change which has been ‘underestimated’.

All existing studies focus on the rise in Co2 in the atmosphere as being the main driver of global temperature rises. However, Dr Roy suggests that the role natural factors plays in climate change should be given more prominence. This study explores various possible areas where models miss important contributions due to these natural drivers. The research is published in leading journal Frontiers. Although CO2 has risen significantly since 1998, global temperature did not show any significant increase. Models however suggested a significant rise.

Dr Roy said: “So what factors are missing?  It is a puzzle of recent slowdown of global warming trend or Hiatus and this study addresses that issue.” For the study, Dr Roy looked specifically at data between 1976-96, which not only covered two full strong solar cycles and two explosive volcanic eruptions during active phases of those cycles, but which also matched a period of abrupt global warming. These data were compared with other periods.”

The research highlighted the important role that a dominant Central Pacific (CP) El Nino, and its associated water vapour feedback, played in global warming within the chosen period. Dr Roy suggests that the explosive volcanoes seen during this phase, which changed the sea level pressure around the North Atlantic, kick-started a ‘chain mechanism’ that played a crucial role. Dr Roy added that the change in Indian Summer Monsoons and El Nino connection during that abrupt warming period, and a subsequent recovery thereafter, can also be explained by this ‘chain mechanism’.

“Uncertainties rigorously concealed from the public” 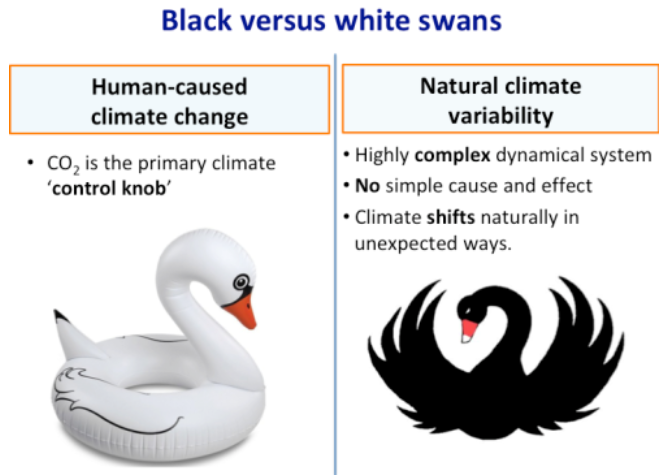 Another criticism of the IPCC is that important remaining uncertainties are rigorously concealed from the public. Judith Curry has beautifully elaborated this point in a recent lecture.

Climate uncertainty monster: What’s the worst case?
On possibilities, known neglecteds, and the vicious positive feedback loop between scientific assessment and policy making that has created a climate Frankenstein. I have prepared a new talk that I presented yesterday at Rand Corp. My contact at Rand is Rob Lempert, of deepuncertainty.org fame.  Very nice visit and interesting discussion. My complete presentation can be downloaded [Rand uncertainty].  This post focuses on the new material.

You’ll find the entire article with illustrations at Climate Etc.