The Swiss online Basel BAZ news site reported yesterday how the Yellow Vest fossil fuel tax protests have spread across Belgium and into the Netherlands, and so threaten to become a European phenomenon.

Previously it was thought that a move away from fossil fuels and higher taxes on them were the will of the people in Europe, and so citizens would readily accept higher taxes on them in order to get society to adopt the lean green energy diet. However that has suddenly turned out to be a gross misinterpretation by policymakers and activists.

As the Yellow Vest protests intensify and spread, activists and delegates in Poland find themselves speechless as the begin to realize that a comprehensive transitioning over to green energies is not going to happen any time soon because their proposals are unmistakably generating anger. The signal to the world from France could not be more devastating to the climate protection movement.

The French have sent a loud and clear message.

The BAZ writes that the European governments are so spooked by the anger that in Brussels institutions such as the EU Commission, the EU Counsel and the EU Parliament had to be completely sealed off because of the demonstration. Police arrested some 100 protesters early as a preventive measure to keep the protest from escalating out of control.

Also police in the Netherlands sealed off Den Haag against protesters. The BAZ reported:

Several hundred people on Saturday also protested at the Yellow Vest demonstrations in the Netherlands against what they saw as the growing gap between rich and poor.”

One reason for the elevated level of anger is the arrogance and hypocrisy EU policymakers exhibit as they rush to impose green energies onto their population. While Eurocrats jet-set from one rescue-conference to another and lead the life of luxury on the taxpayers’ dime, they demand citizens tighten their energy and financial belts and go without.

One egregious example of such arrogance comes from the United States.  The Washington Examiner here reports how Vermont Senator Bernie Sanders spent $300,000 on private jet flights (in a single month!)while demanding citizens refrain from using fossil fuels and forgo their already modest lifestyles. The Examiner writes:

While private jets are a common tool for political campaigners, the same day the massive check was written to a private jet company, Sanders issued a call to arms to take on greenhouse gas emissions.”

Meanwhile President Donald Trump wondered if it was not time “to end the ridiculous and extremely expensive Paris Agreement.” 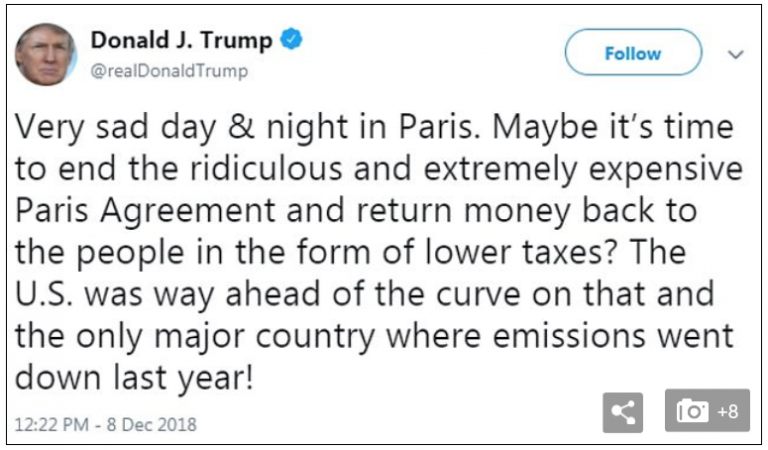 Since the protests began, France has decided to put off the high taxes on diesel and gasoline fuel for the time being. Expect other European countries to crank down their fuel tax rhetoric as a result.