The hearing was to look into the controversy of climate change, with the AfD opposition party casting doubt on the German government’s long-held alarmist position.

In total the hearing lasted some 2 hours, but EIKE has fortunately provided a condensed 16-minute version featuring the main points.

As expected Levermann of the alarmist and activist PIK claimed that the physics of global warming were “rock solid” and that a doubling of CO2 would undoubtedly lead to 3°C of warming. He tried to claim the science was settled.

At the 1:40 mark, Shaviv responded by saying there was “no scientific proof that showed CO2 has a large impact on climate” and that the arguments used by the IPCC to claim otherwise “are faulty”.

He says we know today that the hockey stick chart was “dubious science”.

Shaviv also told the members of the German Parliament that the IPCC refuses to acknowledge the sun’s powerful role on driving climate and sea level rise rate. “The sun has contributed to more than half the warming.”

At the 3:40 mark Shaviv states that CO2 climate sensitivity is in fact only 1 – 1.5°C for a doubling of CO2, far less than the figure suggested by the PIK’s Levermann.

But Shaviv fired back (6:10), reminding that there’s much scientific literature supporting the sun is a major driver and that the IPCC climate models are faulty and lopsided.

At the 7-minute mark Levermann claims the global temperature rose 0.2°C over the past 2 decades “in just a short” time, but not mentioning the natural oceanic El Nino event being at play. He then claimed they had already refuted all the points made by skeptics.

So, Herr Levermann, if what you say is right, then it means the temperature has fallen 0.2°C.”

Levermann then told the Parliamentarians that the fact that CO2 causes warming was as sure as gravity making objects fall, and called everything said by Shaviv “all shit” (9:30).

At the 9:50 mark Levermann clarifies that a doubling of CO2 itself leads to only 1.1°C of warming, but that the added warming will result from the water vapor feedback. He insists there is little uncertainty here. Yet EIKE points out at the 10:35 mark that the IPCC range in fact contains a high degree of uncertainty: 1.5° C to 4.5°C and that there is nothing certain about the science at all. 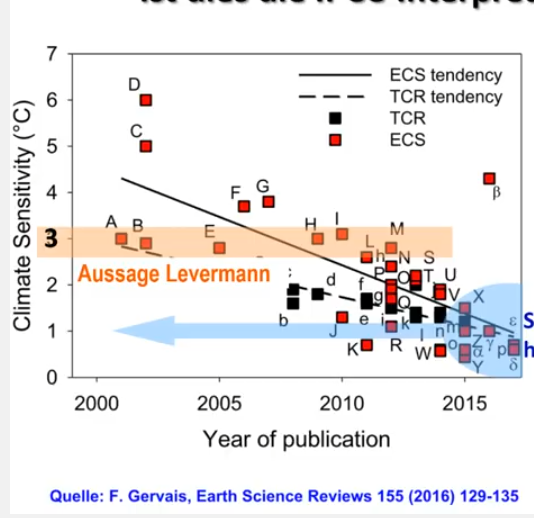 EIKE presents the above chart to show how leading scientists have been ratcheting down their estimates of CO2 climate sensitivity over the years, which today is well below Levermann’s claims of 3.0°C for a doubling. Image cropped at 13:12.

Strangely at the 11:15 mark, the PIK scientist claims that the CO2 molecule is V-shaped. Yet, it is known that it is a straight molecule (11:50).

In the end Shaviv disputes Levermann’s claim that the science is “rock solid”, noting that the models neglect factors such as clouds and that there are a number of studies showing that CO2’s impact on temperature is far more modest.

There’s no proof that large changes in CO2 would lead to large temperature changes.”

Overall, EIKE called the debate before the Parliamentary Committee a “debacle for the climate alarmists”.