German climate skeptic Snowfan here reports that Germany’s DWD National Weather Service has been caught deliberately spreading climate alarmism ahead of the COP24 using “fake news” in its press release of December 3, 2018, where it announced:

Snowfan replied on December 9th that 2018 could not be “the driest year” because the German Weather Service knew plenty of precipitation was in the pipeline for December, 2018.

As Snowfan shows, the old record of 555.1 mm/m² of mean precipitation across Germany was set way back in 1959, (see chart below). 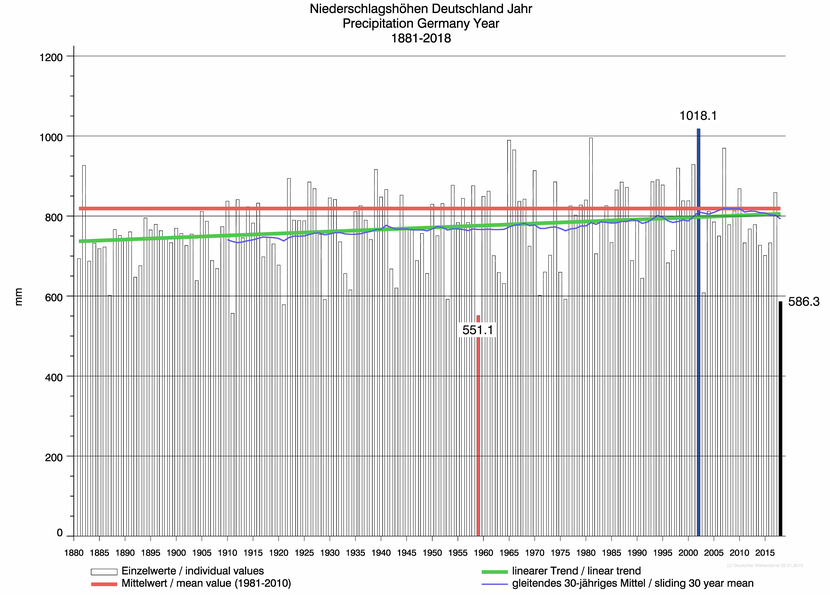 Then on the 11th of December, Snowfan noted that the GFS forecast for precipitation in Germany up to Christmas day showed yet more rain on the way:

Defying the the GFS forecasts, the DWD went ahead and “expected” less than 30 liters/sqm of precipitation to fall across Germany by the end of the month. The purposely very low expectation of course allowed DWD to issue an alarmist press release warning that 2018 could set an all-time record for the driest year ever.

On December 11, Snowfan pointed out that this was not going to happen, and called the DWD claims “ridiculous nonsense”, adding:

1. The year 2018 in Germany cannot be the driest year since 1881, the positive linear trend of precipitation in Germany since 1881 (green line in the DWD graph above) will remain.

Today Snowfan writes that as of December 16, 2018, already about 81% of December’s mean precipitation has fallen so far.

On the DWD’s panic forecast of possibly the driest year on record issued on December 3, before COP24, Snowfan concludes:

There was no basis for it, there is none, and there isn’t going to be any ‘DWD 2018 driest year since since recordings began in 1881!'”

Currently only 15 l/m² are missing until the end of the month. According to a very recent outlook by the GFS, plenty more rain is forecast for Germany for the rest of December:

The DWD thus knew before the December 3, 2018 press release of the climate fairy tale of the driest year ever, and that there would be more heavy rainfall in Germany by the end of the year.

Could one call a deliberate climate false story a climate lie? Does the DWD German Weather Service, with an annual budget of about 347 million euros in 2018, have the state contract to organize climate alarm by repeatedly deliberately spreading climate lies?”