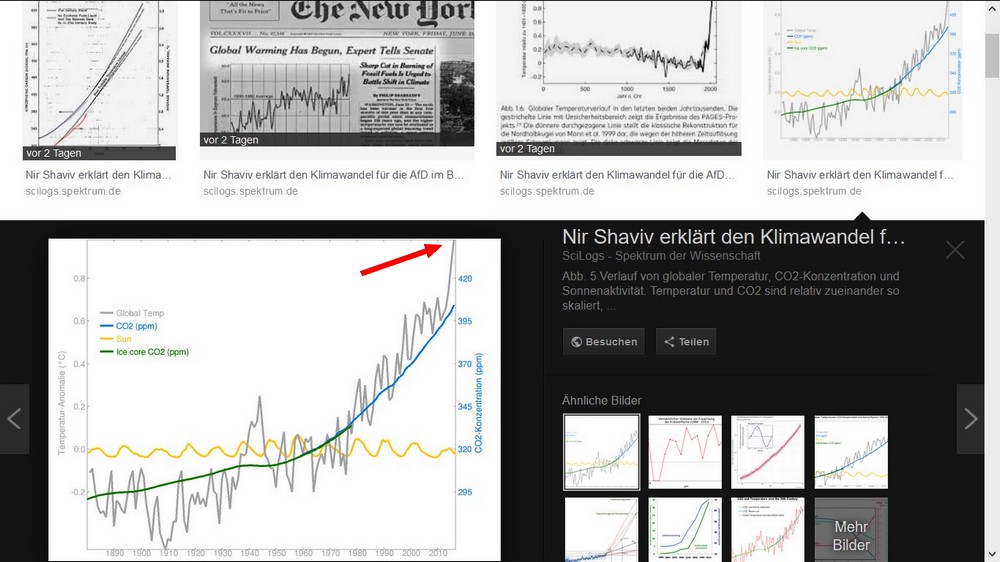 Three days ago, climate researcher Stefan Rahmstorf published an article at his KlimaLounge blog on the hearing of Jewish climate scientist Nir Shaviv in the German Bundestag concerning the Climate Change Conference in Katowice.

There he describes Shaviv as a “climate skeptic” with outlandish theories and who is courted by the fossil lobby and AfD Party. During the hearing, the German Left party even accused Shaviv of obviously being paid to publish climate-denialism. Stefan Rahmstorf went even further, claiming, “This is a targeted misleading of the layperson audience”.

Just who is misleading whom, I would like to pursue here.

I feel another recent paper may require a similar scientific response, the one by Shaviv & Veizer (attached). …This paper got big media coverage here in Germany and I guess it is set to become a climate skeptics classic: …”

Since then, Shaviv has fallen out of favor with Stefan Rahmstorf.

Dissenters get labelled as right wingers

In the comment area of Mr. Rahmstorf’s article, some commentators — who were immediately labelled by other commenters as right wing spectrum — criticized that NASA’s temperature curve in Figure 5 was truncated in 2016, exactly when the last El-Nino pushed up the global temperature. Mr. Rahmstorf vehemently rejected the criticism.

In the year 2016 we were at +1°C temperature anomaly according to NASA (a new record!), but today in the year 2018 only at 0.8°C. Mr. Rahmstorf obviously wanted to hide this by cleverly truncating at 2016, probably with the hope his lay public would not notice it?

Mr. Rahmstorf first showed the following Figure 5 in the article, which was truncated at 2016:

When the “deception” was discovered, he quickly changed Figure 5, without comment, and recorded the year 2017. Now the chart looks like this:

Thus one can say that actually only since 1980 does a good correlation exist.

To be correct, it has to be taken into account that other climatic factors also contribute to the rise in temperature and not just CO2 alone. In addition, in the recent geological past (around the last 1 million years), as evidenced by ice cores in the Antarctic and Arctic, it is always the temperature that has risen and then followed by CO2.

So it may well be that even today the temperature increase precedes the CO2 increase and the CO2 increase is partly due to temperature, e.g. because less CO2 can be stored in warm seas. (Half of the CO2 remains in the air, the other half goes into the ocean).

Of course, Mr. Rahmstorf does not mention this in his article, in the belief nobody would notice. Or in other words, it’s about “deliberately misleading the lay audience”, and here not by Mr. Shaviv.

Mr. Rahmstorf’s supporters in the comments section obviously do not care whether Mr. Rahmstorf uses the methods which he accuses others of using. It is about deliberately discrediting others who have a different opinion and not of having a debate at factual level. The climate activists consider themselves scientifically and politically legitimized to force their policy on the opponents of opinion, and to do so by using smearing and violence if necessary. Sometimes a Jewish scientist gets placed in the “right-wing corner” and persons with a different opinion placed with the right wing AfD. The ends justify the means.

In the following I would like to briefly go into further “deceptions” in Mr. Rahmstorf’s article. He writes:

30 years ago, in 1988, the American climate researcher James Hansen famously declared in the US Senate that the long predicted warming was now there and recognizable in the data.”

But Hansen was completely wrong with his 1988 scenarios, as we know today. See the following figure: 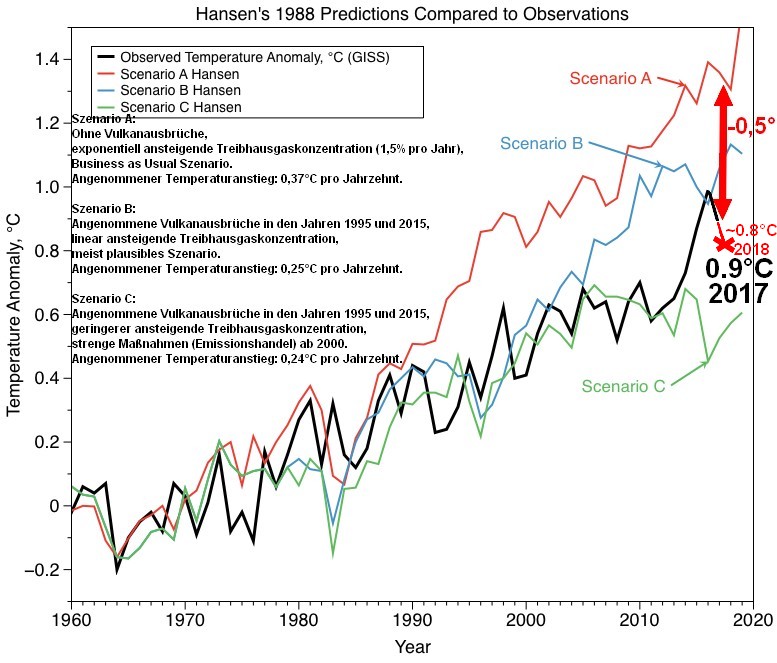 Recent reconstructions would still show the same result. It should be noted that Mann’s 1998/99 hockey stick was truncated in 1980 because the proxy data showed no increase at the end of the time series. His colleague Briffa even truncated the chart in 1960. Used in place of the proxy data were weather data/temperatures from weather stations showing much larger rises than the proxy data averaged.

What follows is the the Briffa version where the proxy data are cut off at 1960 and replaced by data from weather stations and with the proxy data (green) up until the present.

The same was done with the more recent “reconstructions” mentioned by Mr. Rahmstorf.

When Mr. Rahmstorf was asked, he replied, claiming “these are well-known ‘talking points’ of the ‘climate sceptics’, and almost everything is wrong or misleading.”