The Pacific island nation of Japan refuses to obey climate scientists’ forecasts of warming and ignore climate alarmists and their chorus of doomsday shrieks. Climate trends are moving the other way.

Now that February has ended, the 2018/19 winter is now in the books. We’ve tabulated the winter temperature data for Japan going back 32 years. The following chart tells a story that was not supposed to happen: 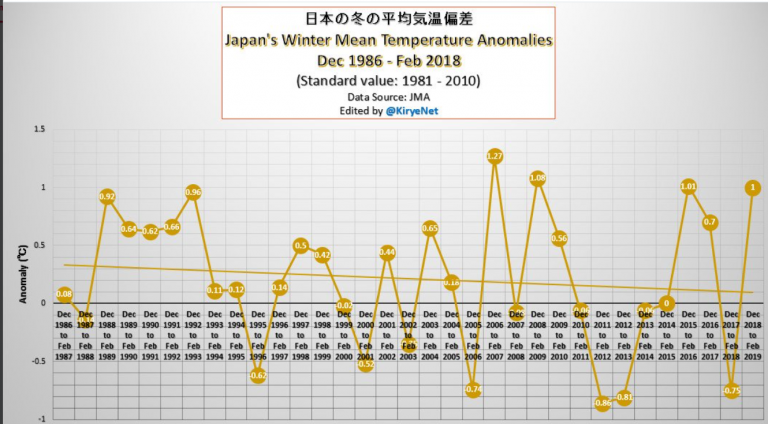 Japan’s mean winter temperature has been falling for more than 30 years, according to the data from the Japan Meteorology Agency (JMA).

While alarmists insist it’s heating up everywhere, the reality is actually just the opposite, and not just in Japan.

The Scandinavian country of Finland, which extends up into the Arctic, also shows no signs of warming at all since December, 1988. 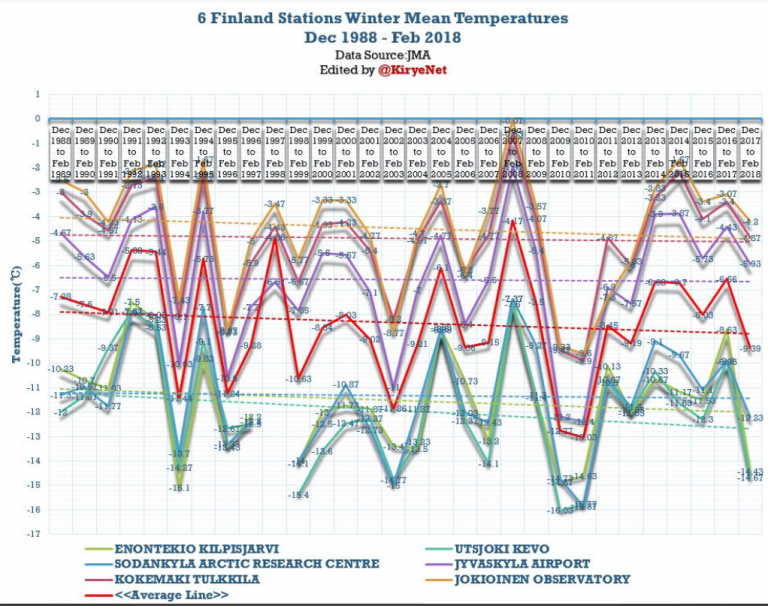 The six stations with complete datasets in Finland are plotted above. Overall the average of the 6 stations shows there’s been a cooling trend (Linear Trend). Maybe that’s why Hadley’s data for Finland stops at 2011. Now we have to go to Japan to get data for Finland!

Unchanged: Over North America, we see similar patterns of cooling. Though the NOAA likes to claim the Great Lakes ice cover is dwindling, it forgets to mention that it’s been robustly increasing over the past 20 years!

Veteran meteorologist Joe Bastardi here tweeted he expects Great Lakes sea ice cover to grow even further in the next 7 to 10 days. Currently it stands at 71%: 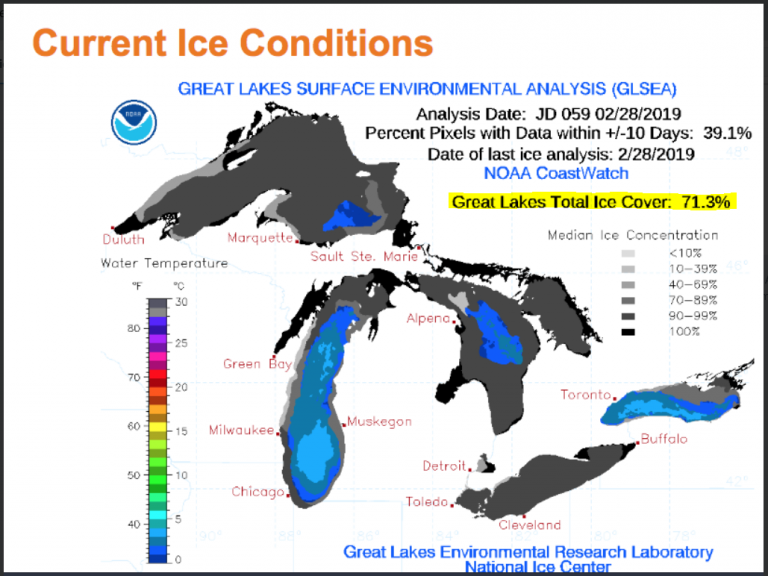 Once the final data for maximum ice cover for2019 are available, it will only boost the recent upward trend. No warming here in 20 years.

Moving on to California, which just recently was deemed to be in a “permanent drought” here as well we see that doomsday predictions are fake.

Moreover DWR expects more new storms to hit next week, which will add further to the snow pack.

In January 2018, California was seeing “severe drought levels” when the snow depth was just 13.5 inches. Experts warned that California might be caught in a permanent drought. But the heavy recent precipitation was wiped out the drought conditions, and the National Weather Service says a weak El Niño will be bringing California more precipitation over the next two months.

Unchanged: The American Thinker adds: “The El Niño storms could bring the dreaded “Pineapple Express” that can “wallop” California with as much as five inches of warm rain in a single day.”