A new scientific paper affirms “all the long-term-trend (LTT) tide gauges of the world consistently show a negligible acceleration since the time they started recording in the late 1800s/early 1900s” and there is “no sign of climate models predicted sharply warming and accelerating sea level rise.” 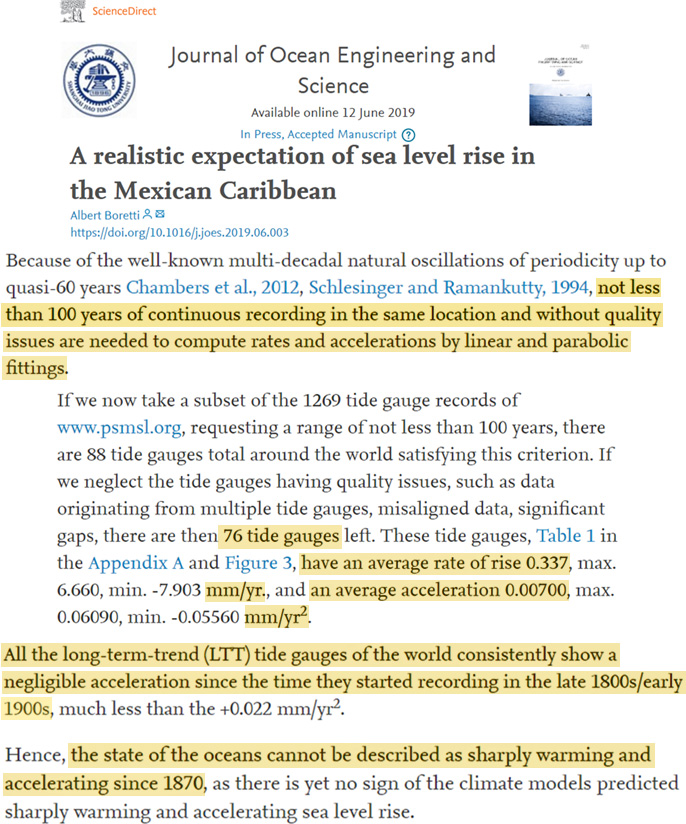 An accurate determination of sea level rise acceleration trends requires at least 100 years of data due to the natural (60- to 80-year) oscillations that could bias the results depending on the start and end dates.

There are 88 world tide gauges with a record length of at least 100 years in the psmsl.org data base. Of those, 76 have no data quality issues.

The average rate of rise for these 76 global-scale tide gauges is just 0.337 millimeters per year (mm/yr), and the acceleration is a “negligible” 0.007 mm/yr².

Thus, the average rate of sea level rise for the world’s best long-term-trend (LTT) tide guages amounts to about 3½ centimeters per century.

Further, the relatively high (2 to 3 mm/yr) local rates of sea level rise in the studied region (the Mexican Caribbean) were determined to be primarily associated with land subsidence.  This affirms the conclusion (Piecuch et al., 2018) that geological processes, or vertical land motions, are more influential than climate-related processes in establishing local relative sea level trends.

These results once again serve to undermine the model-based claims that the world’s seas are sharply rising and accelerating due to CO2-induced global warming.

A realistic expectation of sea level
rise in the Mexican Caribbean

“Because of the well-known multi-decadal natural oscillations of periodicity up to quasi-60 years (Chambers, Merrifield & Nerem, 2012; Schlesinger & Ramankutty, 1994), not less than 100 years of continuous recording in the same location and without quality issues are needed to compute rates and accelerations by linear and parabolic fittings. However, not a single tide gauge has been operational since 1870 in the southern hemisphere, and very few tide gauges have been operational since 1870 in the northern hemisphere.”

“All the long-term-trend (LTT) tide gauges of the world consistently show a negligible acceleration since the time they started recording in the late 1800s/early 1900s, much less than the +0.022 mm/yr2.” 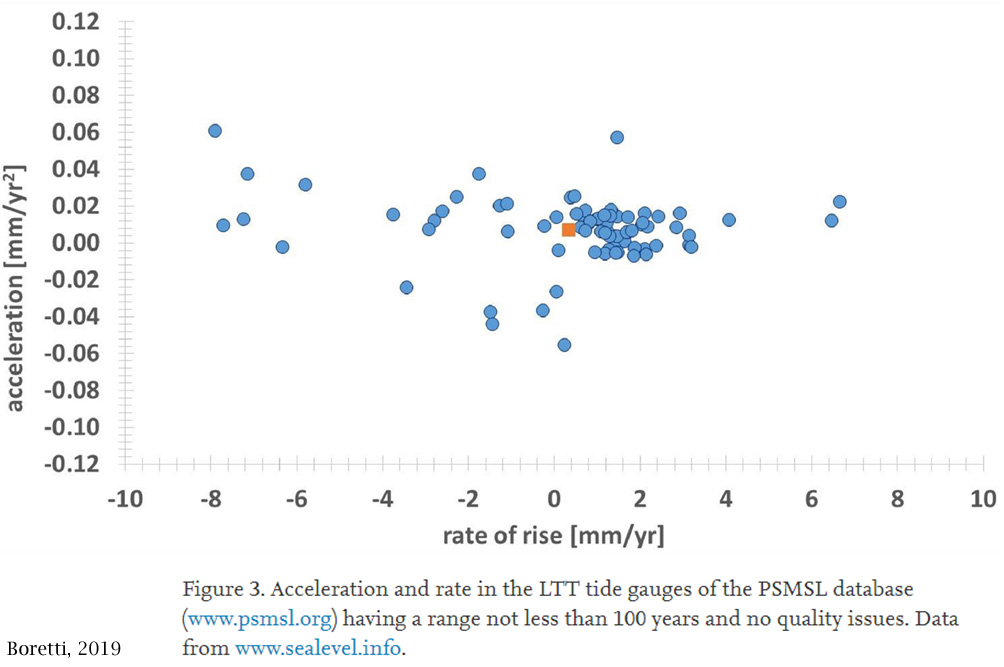 “Apart from land motions of longer and wider scales, it is however important to measure the local vertical motion of the land in an absolute reference frame. From GPS monitoring of fixed domes nearby the tide gauge, the subsidence in Key West is comparable to the relative sea level rise. In the nearby global positioning system (GPS) dome of CHIN, distance to tide gauge 400 m, with data 2008.91 to 2018.99, the subsidence is -3.017±2.256 mm/yr. (Blewitt, Hammond, & Kreemer, 2018). The relative sea level, rises here, mostly because of the land sinks. On a shorter, but still long, time-frame, Peltier (1986) calculated the GIA subsidence of the Atlantic margin for the entire east coast of the United States, with specific for Florida a subsidence rate of about 1 mm/yr.” 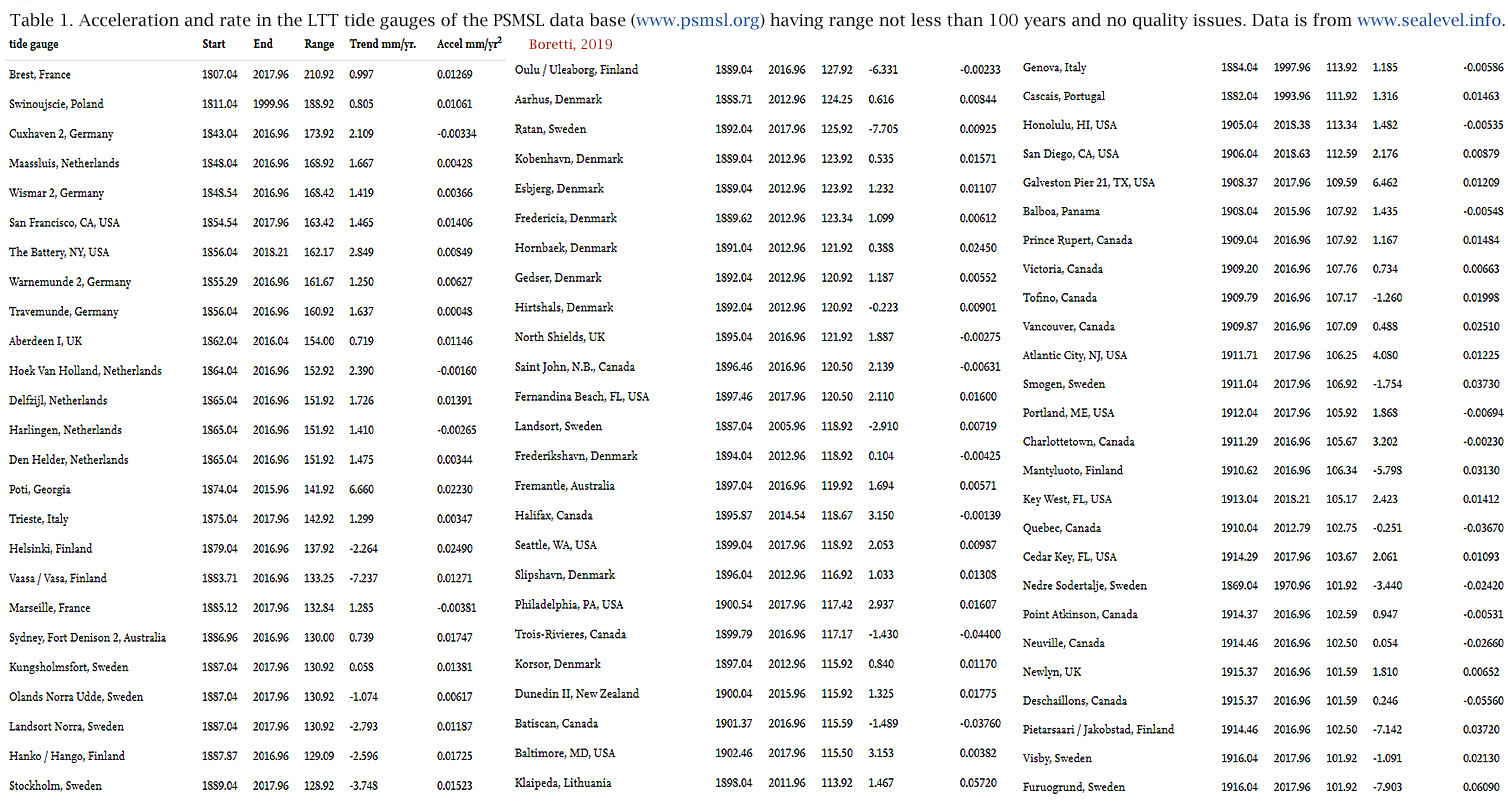