While the headlines naturally focused on an intense heat wave over a region centered over France and Germany last week, the global warming ambulance chasers worked overtime avoiding and ignoring the real story: vast, continent-wide cold spreading across Russia.

First at the European Institute for Climate and Energy (EIKE), Klaus Öllerer reported how the Sahara heat ended up being a “zero-sum” event for the northern hemisphere region of Europe and Asia.

Öllerer wrote last week that despite the heat that took place in large parts of Europe, it was cooler than usual in other neighboring parts. Only a certain area in Central Europe (purple area) was particularly hot. Around it, it was less warm (yellow) and cooler than usual (blue): 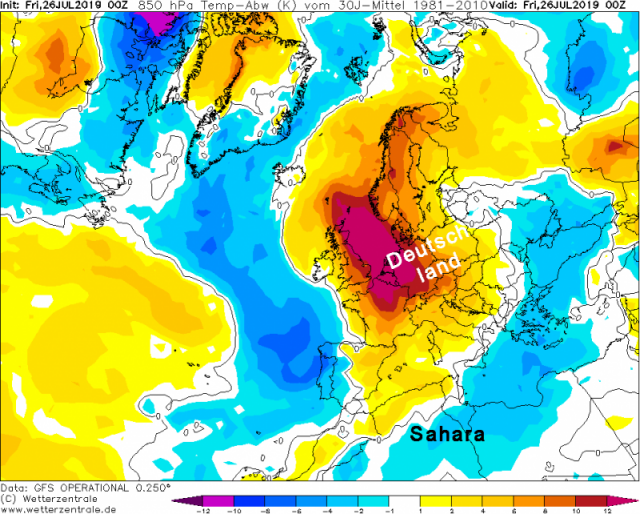 “Even large parts of the Sahara are cooler than usual (blue). This is no wonder, as the heat is now in Europe and cooler air flows into the Sahara,” Öllerer wrote.

“The above-average warm areas balance out with the above-average cold areas,” he concluded. “The current warming is a zero-sum game! Historically, such events have occurred again and again.”

“It is even the case that in cooler times – such as the Little Ice Age – warm summer extremes were more frequent than in the last one hundred years and more,” Öllerer added.

Last Saturday on his July 27 Weatherbell Saturday Summary, meteorologist Joe Bastardi posted images of what the coming days would look like over Eastern Europe and Russia: 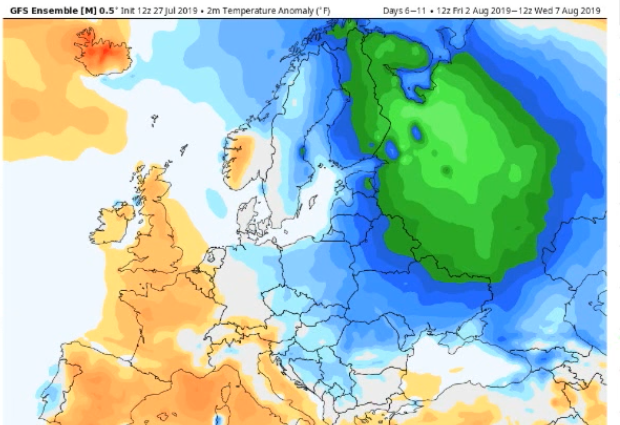 Record cold across in southern USA

In the USA, July cold records were set across southern US, watchers.news here reported.

The media were awfully silent about all this.