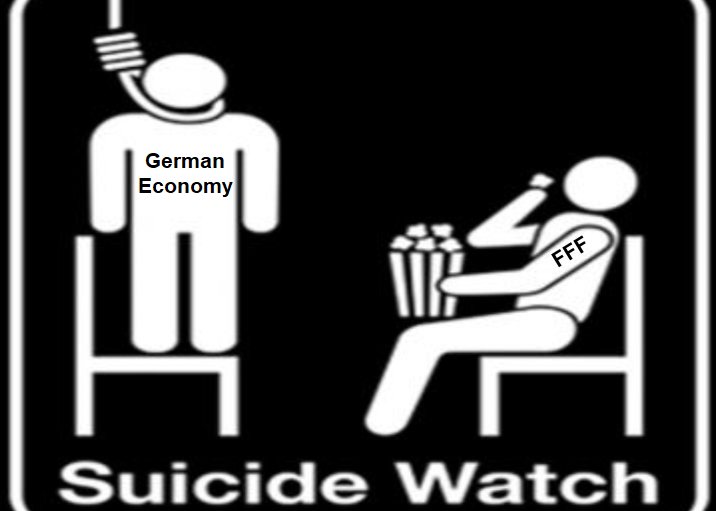 Haunted by visions of a climate collapse, German government yet decides to postpone its economic death leap, instead proposes highly watered down climate-rescue plan.

The Fridays for Future (FFF) movement is sweeping across Germany. Media reports claim more than a million people attended rallies and blocked streets in dozens of cities throughout the country yesterday. The demonstrators’ demands are clear: Away with cars, industry, meat and plastic, etc. In short: Economic suicide.

And spooked by the gains made by the Greens in recent EU elections, the German mainstream Socialist SPD and Conservative CDU parties have been scrambling to take climate rescue really seriously. “No more playing around,” they declared. Angela Merkel’s CDU-CSU/SPD coalition government announced “an immense act of strength” would be taken to combat climate change.

From that point on Germany has been on economic suicide watch with the country watching in suspense.

After having met some 19 hours in a “Climate Cabinet” meeting, the suspense ended yesterday as Chancellor Merkel’s government compromised and announced its long-awaited bold plan. The promised “act of immense strength” plan, however, turned out to be every thing but, and is light years away from what the FFF movement and climate cultists had been demanding.

Though the package promises more economic hardship and environmental destruction, the country at least as put off its economic death leap – for the time being.

But already the now high energy prices and massive attack on fossil fuels and the automotive industry have been causing Germany’s precarious economy to enter a nose dive.

Germany’s once powerful automobile industry – the backbone of the country’s economy – is already reeling. The entire industry is under “massive pressure”, says Axel Dransfeld, head of restructuring at Brandl, and automotive supplier.  German online NTV reports how workers at a number of automotive suppliers have not been getting their wages: “Just how dramatic the situation is is shown by the appeal made by IG Metall [trade union] spokesman Thorsten Dellmann at an information event for employees: ‘Let’s all pray that money will come.'”

The Greens and FFF movement in Germany reacted to Merkel’s timid plan with outrage. For example, green lobbyist Volker Quaschning tweeted he couldn’t eat as much as he’d “like to vomit” and that it’s “a black day for the climate”.

FFF German activist Luisa “Longhaul” Neuerbauer retweeted Quaschning’s comment. Many activists are stunned and speechless by the timidity of Merkel’s 100-billion euro climate plan. However, the student protesters are absent from the streets today (Saturday).

Interestingly, some German climate alarmists are becoming alarmed by the hysteria the demonstrators have been showing on the streets and by the sheer uncompromising vehemence of their demands.

One RTL West reporter, Jörg Zajonc, commented “not only is our Earth doing poorly, but so is our understanding of freedom and responsibility. […] What I’ve also massively experienced today borders on a collective psychosis, paired with wild fear and demands. Ever shriller, ever louder, ever faster”.

Zajonc also added that feasibility is being replaced by ideology, and anything that disagrees is getting labelled “criminal and so must be outlawed”.

He comments that the nation is becoming irreversibly divided by the extremism. Anyone expressing common sense is getting labeled “an enemy of the environment, a denier, someone who needs to be morally punished”.

The demonstration shell-shocked RTL West reporter Zajonc says: “I can barely believe any of it.”

Zajonc summarizes: “Freedom, democracy, liberal thought – all of it being sacrificed .. […] and everyone is enthusiastically cheering it on. What a development.”