At his German news commentary site, Gabor Steingart reports on the results of the latest ARD German public broadcasting trend analyses. Here it’s clear that German citizens are speaking loud and clear on the topic of climate protection: not so fast!

Rush to Green Deal without support

Lately the media and politicians have been pushing hard to start a fundamental change of society to a low-carb, de-industrialized organic garden society. For example, EU Commission President Ursula von der Leyen just announced a 1 TRILLION euro plan to decarbonate the continent.

Yet, public support for such an ambitious and adventurous transformation project appears to be rather soft at best in Germany.

Only 27 percent of Germans regard climate protection as a political priority. 73 percent have other concerns. Outside of the green voters (currently 23 percent in surveys), the alarmism of politicians (“climate emergency”) and scientists (“ecocide”) meets with discontent. The people want to say to the grand coalition government: Don’t throw the baby out with the bath.”

On another note, according to the Austrian www.wetter.at site, Greenland recorded a new all time record low temperature. The site reports:

While 2019 is the warmest year in Australia since records began, as the Office of Meteorology stated in its annual climate report, Greenland has set a new record for cold temperatures: minus 66 degrees C.”

Meanwhile, parts of central Europe have been experiencing record warm January temperatures, and thus reinforce the collective public’s impression that the global climate is out of whack. It’s not.

How unfortunate that Mother Nature would play such a mean trick on Europe. Everywhere else it’s pretty much winter as usual: 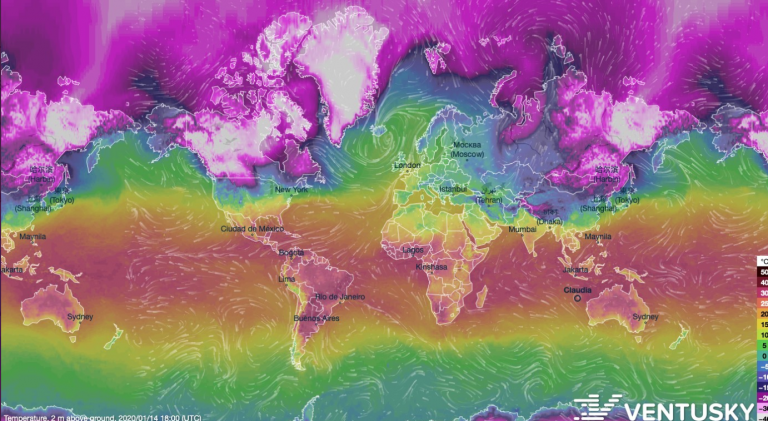 Now European policymakers are going to have an easier time getting the public to accept the EU “Green Deal”. Boy, are they in for a cold awakening.

9 responses to “Fizzling FFF! ARD Trends: Only 279 Of Germans Regard Climate Protection As A Political Priority”