We grieve the loss of Dr. S. Fred Singer

Yesterday, our mentor and good friend, the outstanding scientist S. Fred Singer passed away – peacefully and quietly at the age of 95. Without the constant encouragement we received from this outstanding scientist from the very beginning, the founding of EIKE and our commitment to the dissemination of the scientific facts on climate change would not have been possible here in Germany. 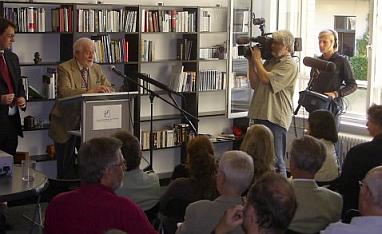 Dr. Fred Singer as the keynote speaker at the first European Climate and Energy conference on May 30, 2007.

Dr. Singer was the keynote speaker at our very first Climate Change Conference in Berlin in 2007 at the premises of the Institute for Entrepreneurial Freedom (IUF) on May 30, 2007, immediately after our founding. And he remained loyal to us in all subsequent years, even though in recent years his physical condition made the long journeys from his home in Virginia increasingly difficult.

But his unrestrained desire not to let science degenerate into a water-boy for politics, which was particularly evident in the increasing appropriation of environmental science by politics, allowed him to marshal all the strength his body could muster.

Fortunately for us all, he was able to do so for almost one and half decades. No one would have been more predestined than him to see exactly this monopolization, because he came directly from science and always worked there in outstanding positions. A short and partial look at his extraordinary curriculum vitae shows.

His scientific work has also been published over 200 times in leading scientific journals. In 1954, President Eisenhower even awarded him a special prize from the White House for his work.

Without any exaggeration it can be said that S.Fred Singer can be called the father of the US weather satellites. Atmospheric physics was his domain.

Because he saw that the emerging environmental movement was striving for a symbiosis with politics in particular, which was highly dangerous for democracy, he founded the Science and Environmental Policy Project (SEPP) in 1990 and the Nongovernmental International Panel on Climate Change (NIPCC) in Vienna in 2008. Both institutions were active in the collection and dissemination of scientific facts, against the increasing ideologization of the environmental idea – and the emerging panic-mongering about supposedly man-made climate change.

Over 200 scientific publications, wealth of books

A wealth of scientific books (Climate Change Reconsidered, or Unstoppable Global Warming, Every 1,500 Years, together with Dennis Avery) and many works written during this fruitful period, many of them with the support of Heartland and CFACT, bear eloquent witness to this. 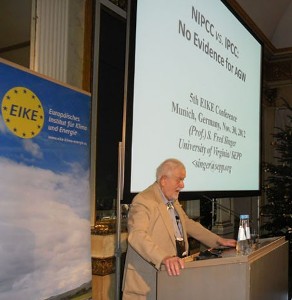 Fred Singer at the 5th Climate and Energy Conference in Munich in 2012.

Our friend, my good friend S. Fred Singer, was also a living example of the unspeakable division and cruelty our continent saw in the last century. Born in Vienna in 1924 as the child of a Jewish family, he left his home country at the early age of 14 after the annexation of Austria by Nazi Germany in 1938, fled first to the Netherlands, where he was apprenticed to an optician, and from there emigrated further via England to the USA.

After serving in the U.S. Navy, he studied physics at Princeton and received his doctorate in 1947. Later he also studied electrical engineering at Ohio State University, where he graduated with a diploma. In addition to English, Fred spoke German, Swedish and Dutch.

However, neither his resume nor his extraordinary scientific merits kept the growing opposition from the green-left camp from attacking and muzzling him using unspeakable defamation and lies instead of scientific debate. The German WIKIPEDIA issue (here) offers readers an example of this. Among other things, the lie is repeated repeatedly that Singer would have let himself be bought by the tobacco lobby because he – himself a lifelong non-smoker and chairman of a non-smoker’s association – had truthfully stated that the carcinogenic effect of passive smoking could not have been scientifically proven.

My last e-mail contact with him is dated October 8, 2019, when we, the board of directors of EIKE, congratulated him on his 95th birthday. We didn’t get an answer to that, his mind was still alert, as we know, but his body refused  to go on.

Farewell, good old friend, rest in peace. You have done so much for this society. I am very proud to have had you as my friend.

===========================
Also this blog, NoTricksZone, was in large part inspired by Dr. Singer, his occasional emails to me and particularly his book: Unstoppable Global Warming Every 1500 Years. And I know other skeptics here who also say they were inspired by him.

I recall wishing hm a happy 90th birthday with this blog post. He’s going to be missed.