The paper, in press, journal pre-proof, analyzes natural variability in European monthly temperatures on decadal and multidecadal timescales and their possible drivers.

Figure 1 of the soon-to-be-published paper follows: 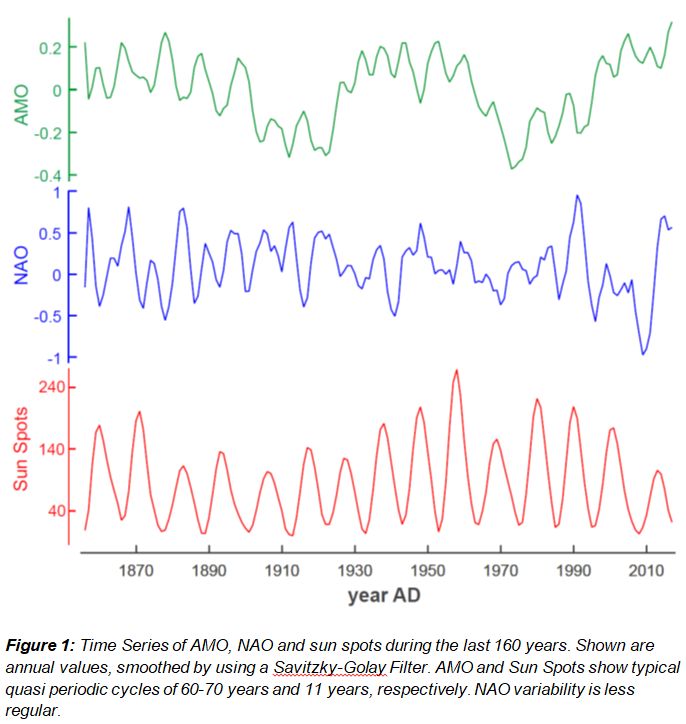 The authors did NOT look at the anthropogenic component of the long term warming of the past 150 years and its attribution but feel the results will hopefully help to better attribute shorter-term temperature changes and their typical patterns.

This is important because efforts by the scientific community are progressing to better predict NAO and AMO for months and a few years in advance, This opens up new chances for more robust mid term temperature prognoses that also includes natural climate variability which the  paper documents.

European monthly temperatures undergo strong fluctuations from one year to the other. The variability is controlled by natural processes such as Atlantic cycles, changes in solar activity, volcanic eruptions, unforced internal atmospheric variability, as well as anthropogenic factors. This contribution investigates the role of key natural drivers for European temperature variability, namely the Atlantic Multidecadal Oscillation (AMO), the North Atlantic Oscillation (NAO) and solar activity changes. We calculated Pearson correlation coefficients r for AMO, NAO and sunspots compared to monthly temperature data of 39 European countries for the period 1901–2015 in order to search for ‘fingerprints’ of the natural drivers. A cross correlation window of 11 months was chosen for AMO, NAO and of 120 months for SILSO to account for possible time lags or phase shifts. The r coefficients were mapped out across Europe on a monthly basis to document regional and seasonal changes of the correlation strength. The NAO dominates European temperature variability during the winter months, with strongest relationship in February. The AMO modulates temperatures in March to November, with best correlations occurring in summer, but also in April. Regions of strongest AMO and NAO impacts shift across the continent from month to month, forming systematic patterns. Direct correlation of the solar 11-year Schwabe cycle with temperatures was identified only in some countries in certain multidecadal intervals during February, March, June and September. Previous studies have suggested a significant solar influence on the AMO and NAO. It is likely that the greatest impact of solar activity on European temperatures is of a non-linear, indirect nature by way of interaction with Atlantic cycles.”

The paper’s graphs show an oscillation of temperature that challenge the sharply rising GISS-like narrative for Europe.