CORRECTION: The chart below is misleading. The ARD has not changed its color scheme. The chart for 2009 shows the 3-day forecast, whose color coding according to ARD in fact has not changed.  The 2019 is the forecast chart for the day, and this 1-day chart uses a different color code for temperature. It too has not changed since 2009. The third chart, as already mentioned, is from another drama source: website: wetter.de. Hat-tip: reader Taylor Martin

WARNING: Watching too much German public television will make you hysterical, and pretty stupid (if you’re already leaning in that direction)

Sometimes you really wonder: can people be fooled really so easily?

German ARD public television network apparently thinks so, and has since gone off the deep end with the hype, drama and disinformation they add to their reports. I guess they think it’s working.

At Facebook one person illustrated this very well by showing the evolution of weather charts used by ARD German television in 2009, 2019 and this year. If you were to rate numerically the level of redness and fiery imagery and plot it,  you’d get a real hockey stick trend. Check out the forecast chart evolution below: 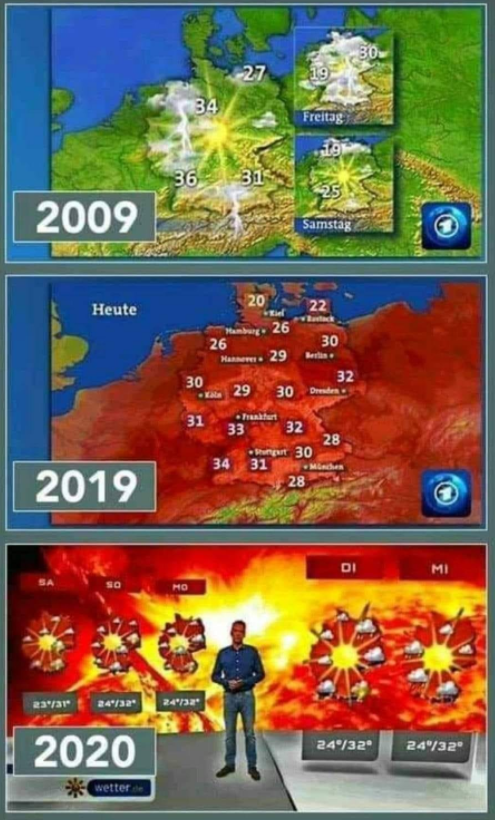 In 2009, a nice hot summer day way forecast using pleasant color scheme of yellow and green. Even the “Samstag” (Saturday) forecast of highs from 19-25°C used the same green color scheme as it did for showing 34-36°C.

But as the years went by, Germans refused to panic enough about warming, and so by 2019 everything charts had to look hot and unbearable – even for forecasts of 20°C, see middle chart. Even temperatures in the 70sF look warm and toasty.

Then last year came doomsday prophet Greta with her inferno-visions and messages of hell. This year, weather forecast charts of highs in the 70s! to upper 80s are exploded in size, and made to look like explosion-like inferno images taken from beyond the gates of Hell. Just a note: I’m not sure if the 2020 chart is from ARD or another station, but you get the idea of what’s going on.

14 responses to “German TV Propaganda: Now Forecast Charts For Regular Summer Weather Made To Look Like Images Of Hell”