Over the recent weeks, leading AGW science skeptic Marc Morano of Climate Depot has received messages threatening him and his family with bodily injury (or worse).

Copies of the criminally threatening messages have been made available to NTZ and other skeptics. The threats of bodily injury to Mr. Morano and his family members made in the messages meet the criminal threshold in Europe, experts say. 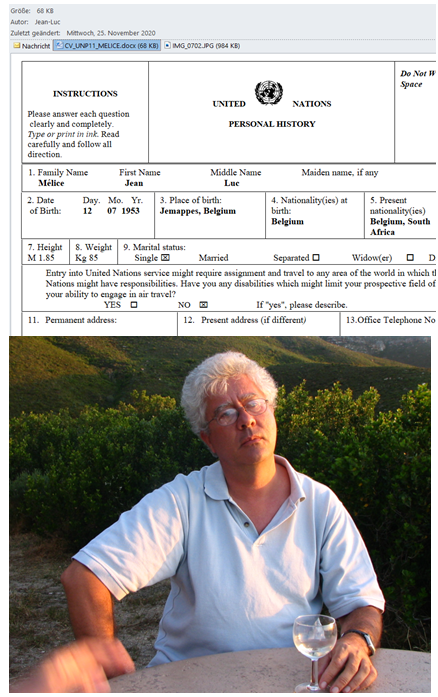 Did criminal threats aimed at prominent AGW skeptic Marc Morano come from a distinguished researcher or someone who stole his identity? Photo: Dr. Prof. Jean-Luc  Mélice.

It is unclear whether the criminal threat came from Dr. Melice himself or more likely from someone who had stolen his identity. If it did not come from Melice, then he really needs to be concerned about another malicious party stealing his identity and using it to conduct criminal activity.

I am going to write you in french, remember that french is the language of every educated gentleman… which is not your case.”

You are getting very old now, your also bald, looking more and more like the Donnie the con, the orange agent.”

In fact, you are typically an old mafiosi-type italian immigant.”

Of course, you have no scientific training, your brain is to small to understand science, your IQ is under 100 (I have that information)”

My scientist friends here in France welcoming  you … with a baseball bat.…Funny, we are all waiting for you if you have the stupid idea to travel to Europe”…

I am a NASA expert and travel many times in the USA…I know the addresses of your kids and of of yourself. So, try to be very careful...”

Donnie the don is terminated, this will be he case with yourself and the oil industry…”

As the text indicates, the author of the threatening email masters the French language, but not so much the English language, so it was likely written by a native French speaker.

In a subsequent email sent a day later, on November 28, the same author added yet more ethnic hate slurs, among these comments (emphasis added) were (excerpts):

The origin of your name comes from Calabria in Italy…lots of mafiosi over there!!!”

Morano in Spanish means north African nigger. I now understand your complex of inferiority, and your ugly face. Indeed, you are not of WASP origin.”

Note that I was living in the USA during the Kennedy time. I remember very well the 3 dark days after he was shot by a fucking moron as yourself. At that time, I was in an american high school and the Americans were not anti-science as they are now.”

Besides aSouth African nationality, I have also an US passport.”

Please also that I have worked as a diplomat, besides being a super top scientist.”

I would love to be in front of you during a FOX interview. I would destroy you in a few seconds…”

Remember, we are following you, and are very keen to smash your ugly obese face with a baseball bat.”

Just fokoff … as we say in afrikaans…”

Again to remind readers, the email likely came from a 3rd party who is using Dr. Melice’s identity to conduct his criminal threats. Don’t assume anything!

Coincidentally, Dr. Melice does appear to have a history of making aggressive and angry comments directed at skeptics of AGW science. The whole affair needs to be cleared up.

The real person behind the threats and potential identity misuse needs to be dealt with legally. In Europe such vicious threats are criminal acts.

Then just two days ago, on December 24th, Marc Morano received yet another criminally threatening text message, but this time by a person not providing any identity. In that text message the author wrote:

Go fuck yourself and eat shit, you fucking most corrupt ass piece of shit fucking ass cunt as THOSE GROUPS FUCKING HATE YOU!”

Worst-Case Scenario! Bye-bye political establishment! Bye-bye media! Hollywood, bye-bye! Tissues! How bad? So bad! How much death? So much death!”

Worst-Case Scenario! Watch your back bitch! You can run but you cannot hide! Bye-bye you corrupt fucking cunt ass piece of shit! Bye-Bye family!”

The tone and hate level are similar to that seen in the earlier emails of November 27 and November 28, but it is impossible to determine if it originated from the same author.

When asked if such graphic threats have been increasing, Mr. Morano replied by email: “Yes. They are increasing. My books and movies and Congressional testimony have increased the flow.”

Earlier in 2019 Mr. Morano also received an angry threat delivered to his home address by regular post, postmarked Eureka, California. That letter blamed skeptics like Morano for the Arkansas River flooding. It contained:

Real threats, or not to be taken seriously?

It would be very easy to dismiss these threatening messages as something coming from a sick-minded coward, a bitter person in a basement, hopelessly engulfed by hatred.

Yet on the other hand, they also show us the person making the threats is mentally unstable, perhaps unpredictable, and so capable of any act, thus posing a real danger.

One thing is clear: sending someone such messages is a criminal offence in Europe.

Anyone receiving such terrible threats needs to take them to the responsible authorities for investigation. It’s wrong for people to steal identities and/or to criminally act in this way.

We have multiple potential victims here: Marc Morano, his family, his colleagues, science free speech and even the researcher who maybe had his identity stolen and used to conduct criminal acts.