Browse: Home / 2021 / January / 20 / Arctic Cool Off: Canada, Greenland And Iceland Have Seen Almost No Warming So Far This Century

We’ve been hearing reports about how Siberia is experiencing a brutal cold spell with record-breaking cold readings, and places like the Sahara and Saudi Arabia have been getting snow. Spain has seen record cold temperatures. Though this is weather, it wasn’t really supposed to happen. Does it have any meaning?

Indeed we recently wrote about how 148 scientific papers were published in 2020 that show large regions of the Earth in fact haven’t warmed in recent decades.

And alarmists like to tell us at that the Arctic and Antarctic are supposed to be warming rapidly due to man-made CO2 global warming.

Today we examine temperature series from the Japan Meteorological Agency (JMA) for northern stations where sufficient data are available. Some stations have large data gaps, and so these will not be looked at.

Canada: no warming in a quarter century

First we begin with mean annual temperatures for Canada, where we look at 9 stations going back to 1994:

Three of the observed stations show only slight or modest warming – nothing significant let alone alarming. On the other hand, 6 of the 9 stations show no warming or even cooling over the past quarter century. It’s mysterious when people say the Arctic is warming rapidly, when clearly it isn’t anymore.

Greenland stations have cooled off

Next we go to Greenland, which for global warming alarmists is one of the big kahunas in terms of climate catastrophe and sea level rise. If it’s warming, then there’s a risk Greenland’s 3000-meter thick glaciers could melt and cause sea levels to rise dangerously.

What follows are plots of JMA data for 6 stations on Greenland. A couple of the stations have data gaps, but still can give us an idea as to what’s going on.

In Greenland as well we find nothing alarming going on. It’s all been pretty stable since 2001.

Iceland has cooled since 2001

We also plotted the JMA data for three stations (the ones with sufficient data) in Iceland, and here as well we found no warming! 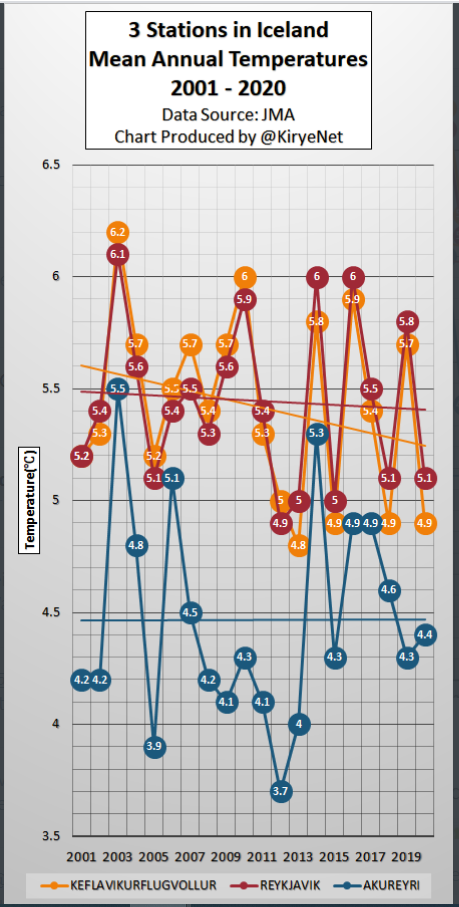 Obviously the often claimed alarming warming hasn’t been global at all over large swaths of the globe. This is backed up by stations in Canada, Iceland and Greenland – plus 148 papers published in 2020.

We hope policymakers will take this into account before rushing into the suicidal policies of a Green New Deal.

7 responses to “Arctic Cool Off: Canada, Greenland And Iceland Have Seen Almost No Warming So Far This Century”