UPDATE: Sea level rise near the coasts where people actually live is found to be 1.69 mm/yr. But when crunching the data for the entire ocean, as Willis Eschenbach has shown, a figure of just 1.52 mm/year is computed.

There she notes, “Climate alarmists are worried that the sea level is rising too fast and flooding is coming soon. You can find many data images like this on the net:”

Lately the sea level has been rising 3.2 mm/year and some scientists say the rise is accelerating.

At her blog, Zoe points out that this is the rate measured by satellite for the entire ocean. She says what’s really important is the rate of rise along the coasts where it really matters for humans.

Examined data for grids adjacent to the coast

So she crunched the massive data volume for the surfaces near the coasts, downloading over a gigabyte of 720×361 gridded data covering 1950 to 2009.

From her analysis she produced the following table and computed the rise for the seas near land. 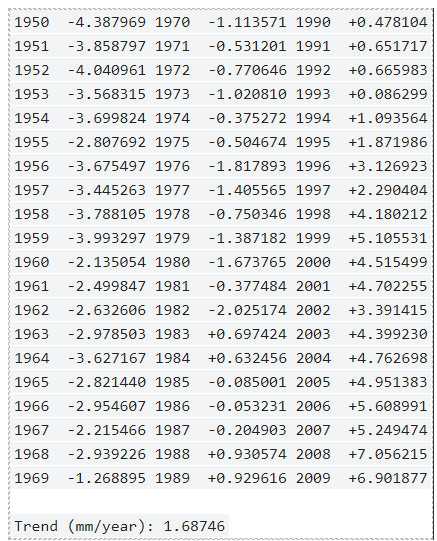 Thus the coastal trend is thus just half the total ocean trend claimed by scientists and the media.

Zoe’s findings agree nicely with tide gauges measurements, which also show sea level along the coasts rising only about half as quickly as the satellite altimetry suggests.

For example, in 2016 Dave Burton of SeaLevel.info site here found sea level rise measured by the world’s best long-term coastal tide gauges is just under +1.5 mm/yr (about 6 inches per century).”

But Willis Eschenbach here commented that he had downloaded the same file – but for the entire ocean – and found an average rise of 1.52 mm/year. So now the question begs: How are the scientists coming up with 3.2 mm/year?

Not long ago NTZ contributor Kenneth Richard reported how less than 1% of the world’s 358 tide gauges were on track to meet IPCC’s 75 cm sea level rise by 2100.

Moreover, a recent study of 53 long-term tide gauges scattered on the US east and west coasts found that sea level rise has in fact slowed down.

In a nutshell: All the claims that we’re all going to drown seem to be flat out contradicted by data from along the coast.