A new paper authored by distinguished climate researcher Nicola Scafetta and published in the journal Atmosphere titled Reconstruction of the Interannual to Millennial Scale Patterns of the Global Surface Temperature concludes that humans are only responsible for half, at most, of the recent warming.

Dr. Scafetta, a research scientist at the University of Napoli Federico II, and formerly an adjunct assistant professor at Duke University, examined data and identified an array of internal climate system and external cycles to explain the ongoing discrepancy between IPCC models and the past climate.

Scafetta’s reconstruction since 1000 A.D. yielded a curve that fit extremely well to that of the 2005 Moberg reconstruction and the modern HadCRUT 4.2 dataset: 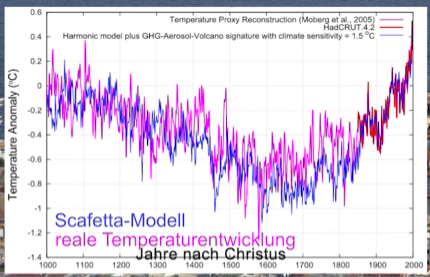 Once the natural and the anthropogenic components were accounted for, it could be determined how much each impacted the climate. Scafetta’s result, highlighted in yellow:

Scafetta’s 1.5°C climate sensitivity for doubling of CO2 is only about half of the IPCC’s expected average of 3°C.

Scafetta calls the IPCC models fitting the data of the modern warm period “just an illusion”.

These results clearly show that the climate models are not correct because the natural variability they are not able to reproduce. At least 50% of the warming from 1900 to now, to 2020, should be considered natural, produced by natural cycles.”

Using his model, which accounts for natural oscillations, Scafetta foresees no warming until 2030, possibly 2040.

Climate changes are due to anthropogenic factors, volcano eruptions and the natural variability of the Earth’s system. Herein the natural variability of the global surface temperature is modeled using a set of harmonics spanning from the inter-annual to the millennial scales. The model is supported by the following considerations: (1) power spectrum evaluations show 11 spectral peaks (from the sub-decadal to the multi-decadal scales) above the 99% confidence level of the known temperature uncertainty; (2) spectral coherence analysis between the independent global surface temperature periods 1861–1937 and 1937–2013 highlights at least eight common frequencies between 2- and 20-year periods; (3) paleoclimatic temperature reconstructions during the Holocene present secular to millennial oscillations. The millennial oscillation was responsible for the cooling observed from the Medieval Warm Period (900–1400) to the Little Ice Age (1400–1800) and, on average, could have caused about 50% of the warming observed since 1850. The finding implies an equilibrium climate sensitivity of 1.0–2.3 °C for CO2 doubling likely centered around 1.5 °C. This low sensitivity to radiative forcing agrees with the conclusions of recent studies. Semi-empirical models since 1000 A.D. are developed using 13 identified harmonics (representing the natural variability of the climate system) and a climatic function derived from the Coupled Model Intercomparison Project 5 (CMIP5) model ensemble mean simulation (representing the mean greenhouse gas—GHG, aerosol, and volcano temperature contributions) scaled under the assumption of an equilibrium climate sensitivity of 1.5 °C. The harmonic model is evaluated using temperature data from 1850 to 2013 to test its ability to predict the major temperature patterns observed in the record from 2014 to 2020. In the short, medium, and long time scales the semi-empirical models predict: (1) temperature maxima in 2015–2016 and 2020, which is confirmed by the 2014–2020 global temperature record; (2) a relatively steady global temperature from 2000 to 2030–2040; (3) a 2000–2100 mean projected global warming of about 1 °C. The semi-empirical model reconstructs accurately the historical surface temperature record since 1850 and hindcasts mean surface temperature proxy reconstructions since the medieval period better than the model simulation that is unable to simulate the Medieval Warm Period. View Full-Text