Global warming is supposed to mean a shorter winter, and thus we should expect a March warming trend for the northern hemisphere.

Today we look at the latest March data now available from the Japan Meteorology Agency (JMA) for France, Ireland and Finland.

As we have seen in other countries, the untampered JMA data show that the month of March has not warmed in these countries in decades.

30 years of March cooling in France

First we plot the mean temperature data for the surface stations in France for which the JMA has sufficient (untampered) data – going back more than 3 decades:

As the above chart shows, only three of the 12 stations plotted show any warming for the month of March. Nine of 12 stations show cooling or no meaningful trend. So also in France spring appears to have been coming a bit over the past three decades.

Next we plot the mean temperature for the stations in Ireland, also for which the JMA has sufficient data, going back close to four decades.

Ireland is particularly interesting due to its location in the Northeast Atlantic, and so can tell us what impacts oceanic cycles could be having: 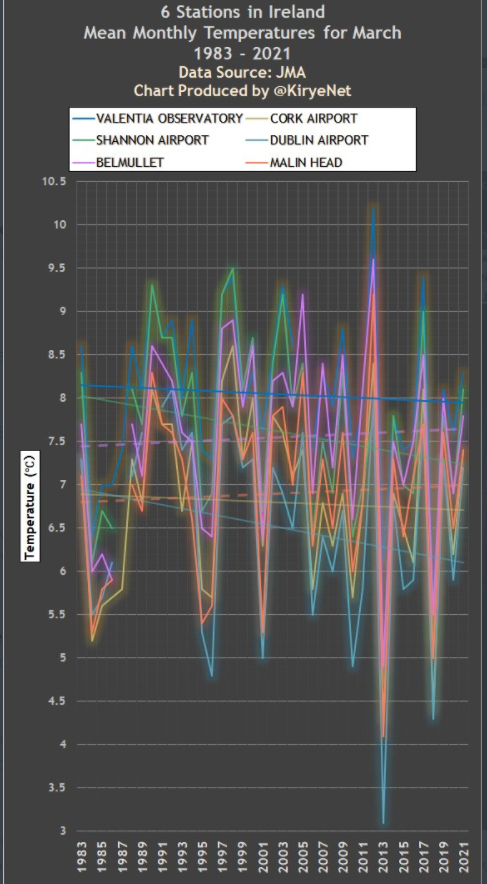 And that impact seems to be a wee bit of cooling. Five of six stations in Ireland show cooling, or flat. CO2 is definitely not driving the climate there.

Next we plot the March data for Finland, also the stations for which the JMA has adequate data:

Like in Greta Thunberg’s Sweden, Finland’s winters are not getting shorter. The data there show no warming in March taking place in more than 30 years. Winter is taking its time leaving. Nothing is really changing. Why would this be a “crisis”?

In summary, along with Canada, Alaska and Sweden, also Finland, France and Ireland have been showing no March warming.

One of the coldest Aprils on record in Germany

And finally, our friend Snowfan here reports how April, 2021, in Germany is coming in as one of the coolest since recording began in 1881.

The following chart of Germany shows the April mean temperature anomaly so far, up to April 29th, for various locations. Used is the new 1991 – 2020 reference period: 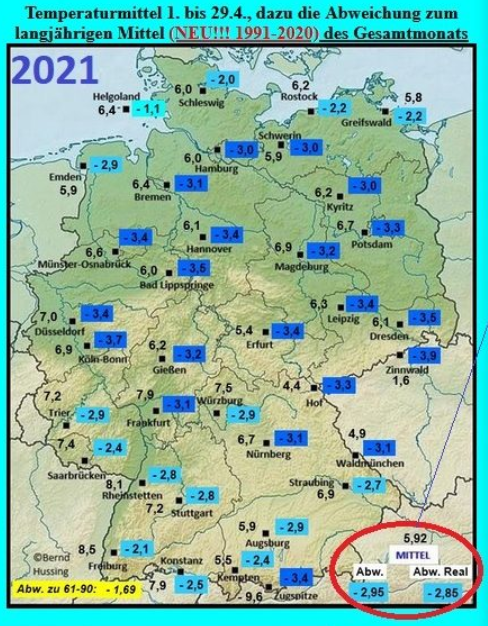 The latest forecast also foresees a cool start for May.

9 responses to “Latest JMA Data Show France, Ireland And Finland Have Cooled In March, No Warming!”