Did you know that TESLA also manufactures an e-truck? But Australia now refused to approve the “Semi”.

We recently reported on the Nikola company’s hydrogen truck. Engineers and other experts have doubts about the concept because the extremely volatile gas requires significantly more complicated technology and a whole new infrastructure that doesn’t even begin to exist. What that means for transportation costs is easy to calculate.

We have already looked at similarly entertaining concepts such as solar roofs or high-voltage overhead lines over highways. But it gets even better: While it has long been known that electrical energy is best used for lighting and computing, it is not best used for wheel traction and heating, because efficiency goes down and costs go up (which is why the EU has abolished powerful home vacuum cleaners, for example).

Vehicle too big – likely because of the large batteries

Nevertheless, Elon Musk and his company Tesla manufactures not only luxury cars, but now semi-trucks. The model, which is not exactly shapely, is probably quite lavish in size due to its gigantic batteries, which is why the Australian traffic authority has refused to grant it an approval. The theoretical performance data suggest a large battery: 480 to 800 km range. 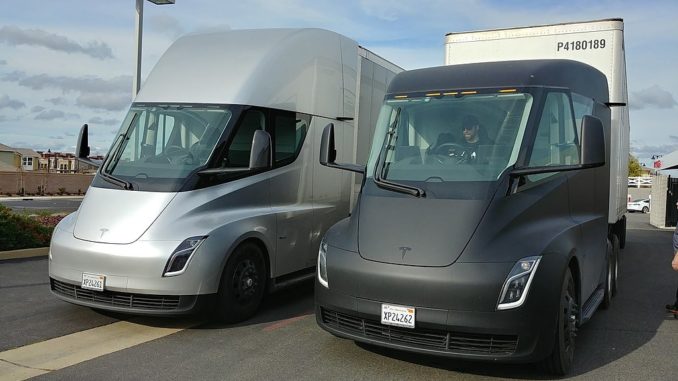 The Semi is slightly wider than the maximum permitted 2.50 meters. But rather than comply, Tesla demanded a change in Australian rules:

The Commission will be aware that given Australia’s small size in comparison to global markets, inconsistencies like this between Australian regulations and larger markets will delay or preclude vehicles coming to local markets. Currently, Australia will likely miss out on the first generation of electric heavy vehicles such as the Tesla Semi because of this.”

“Not very trustworthy” claims by Tesla

So pressure with the economic argument?

The Semi is said to have 20% lower operating costs than a comparable diesel – a claim that is not very trustworthy unless you factor in lavish subsidies. And it is not emission-free either, since the electricity comes from coal or nuclear power plants (and certainly not from the numerous Australian solar and wind power plants).

12 responses to “Australia Transport Authority Says “No” To Tesla Battery-Powered Truck…Too Big Due To Gigantic Batteries?”