Warmth led to the rise of the Roman Empire, while cooling accompanied its demise

A new paper appearing in Scientific Reports titled “Persistent warm Mediterranean surface waters during the Roman period” by Margaritelli et al looks at the climate at the time of the rise and fall of the Roman Empire, and beyond.

The team of scientists reconstructed sea surface temperatures (SST) By analyzing a sediment core taken from the Sicily Channel. This new temperature record was also compared to a North Hemisphere temperature reconstruction, and others from the Mediterranean. The team of researchers found a “persistent regional occurrence of a distinct warm phase during the Roman Period” over a very broad part of the northern hemisphere.

The authors say these reconstructions (Fig. 3 below) “consistently show the Roman as the warmest period of the last 2,000 years” and “2°C warmer than average values for the late centuries for the Sicily and Western Mediterranean regions”. 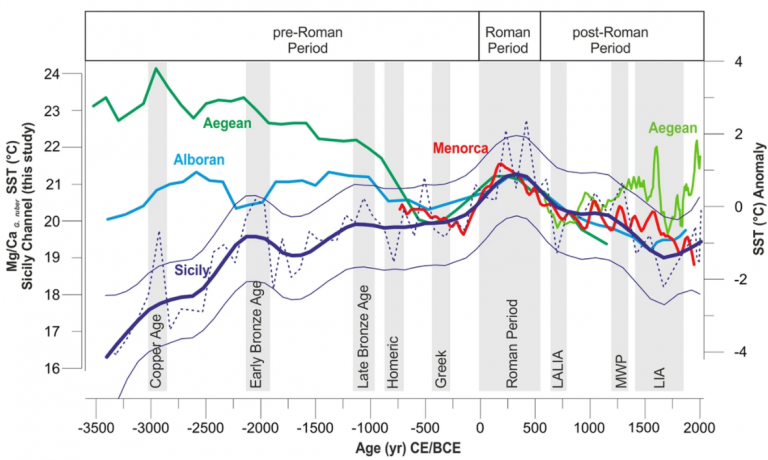 Comparison of the SSTs records from Sicily Channel (thick dark blue line, to others across the Mediterranean. Source: here.

The authors hypothesize there was a “potential link between this Roman Climatic Optimum and the expansion and subsequent decline of the Roman Empire”.

The authors note the pronounced warming during the Roman Period is also “almost consistent with other marine records from Atlantic Ocean56,57,58 as well as the continental anomaly reconstruction from Europe from PAGES 2 K, 201359.”

The Roman Climatic Optimum was characterized by prosperity and expansion of the empire, all during a period of warmth that is comparable to today.

“Greatest ancient civilization of all time”

The team of scientists concluded that the very warm conditions were particularly intense and correspond to the so called “Roman Climatic Optimum”. “It was during this period that the greatest ancient civilization of all time, the Roman one, developed.”

“We hypothesize the relevance that these climate conditions may had in the expansion of the Roman Empire and its collapse with the general development of colder conditions,” the authors further conclude.  “A cooling trend dominated after the Roman period reaching minimum values, in the whole Mediterranean, by the end of the LIA…”

“The post-Roman Period was characterized by a progressive cooling trend of 4.5 °C ± 2.1 °C that ended by the Little Ice Age (LIA) interval (Fig. 2) and was punctuated by two short-term events well-known as the Late Antique Little Ice Age (LALIA) and the Medieval Warm Period (MWP).”