So far, much of Europe has seen a cold and wet 2021. It may be related to solar cycles.

An essay at Die kalte Sonne by Dr. Ludger Laurenz looks at the relationship between solar activity and weather trends, and believes this summer’s temperature will be 1.5°C lower.

There are many scientific opinions about solar activity’s impact on weather and climate, which differ and contradict each other. For example, a new publication by Leamon et al. provides an important building block for uncovering solar influence. Background here.

In the Leamon et al publication, the authors looked at the 22-year Hale solar cycles and saw it is possible to detect and substantiate solar influence in historical climate data (from tropical ocean surface temperature to temperature, sunshine, and precipitation data) and to make quantitative statements about the influence of solar activity on weather data.

“Using the alternating years between Hale cycles, a correlation between the 22-year Hale cycle of the Sun and the trend of winter temperature in the polar night of Norway can be demonstrated with high statistical significance,” Dr Laurenz adds.

“Parallel to the temperature trend, the solar influence of the Hale cycles is also evident in the index values of the North Atlantic and Arctic Oscillations,” says Laurenz  in addition. “Evidence of the influence of solar activity in the polar night of Scandinavia demonstrates that differences in solar activity are transmitted to the near-surface temperature via amplification mechanisms such as change in circulation patterns in the North Atlantic and Arctic Oscillations.”

The sun’s role in weather patterns is a great significance, and so CO2 is not the main driver at all.

Laurenz also says that with the help of the 22-year Hale cycles, “it can be demonstrated that the current spring cold in Central and Western Europe is influenced by solar activity” and that for the summer of 2021,” a rather cool temperature can also be expected because the summer temperature in the last 6 Hale cycles since 1900, especially in cycle year 11, which includes 2021, is by law about 1.5 °C lower than in the cycle years before.”

“The prospects for the summer 2021 in Germany are rather subcooled from the point of view of the solar activity,” Laurenz writes in his essay. “In the last 6 Hale cycles since 1900, not only April was subcooled in year 11 of the Hale cycle, which also includes 2021, but also the summer, see Fig. 9”:

The temperature trend this summer will be very exciting. Will the summer temperature drop by only 1.5 °C in sync with the mean, or will the temperature plummet by 4°C, as in Figure 8 for the April temperature in Central England?” 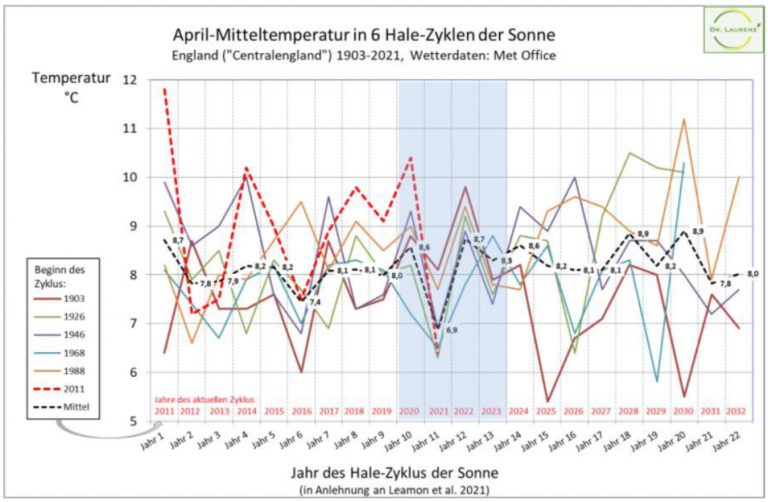 4 responses to ““Likelihood Of A Sub-Cooled Summer For Europe In 2021”, Hale Solar Cycle Suggests”