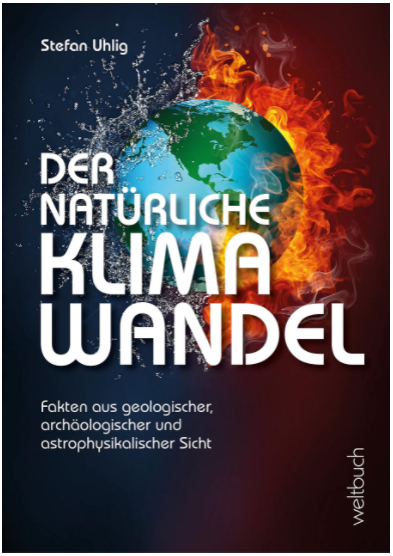 New book by geology researcher says climate change is natural, little to do with CO2. Available at Amazon.

The following discussion of climate change is based on the current emotional, irrational ideological and scientifically closed discussion and reporting, as well as the continuous mixing with topics of environmental protection. The causes of the constant climate change are very complex and cannot be explained with only one parameter, like the carbon dioxide concentration (CO2) in the atmosphere.

The temperatures of the Earth’s atmosphere have been steadily increasing since the end of the last ice age about 12,000 years ago, albeit with interruptions, associated with a rise in global sea level. If the current warming reached the level of the last Eemian warm period about 120,000 years ago, sea levels would also rise another 6-9 meters. In response to steadily rising sea levels, dike and dam construction has been forced in the Netherlands, for example, since the High Middle Ages. This will also have to be stepped up in other regions of the world.

Even our prehistoric ancestors were impressed and frightened by weather phenomena such as lightning, thunder, hail and freezing cold, which were inexplicable to them at the time and usually threatened their lives. This mood probably also gave rise to early religions during the Paleolithic period with the belief in “higher” powers, such as a god of thunder, who was worshipped as the god Th or until the time of the northern European Germanic peoples, and who is still remembered today in our day of the week “Thursday”. According to tradition, the thunder god Th or drove across the sky in his thundering chariot drawn by goats and hurled lightning bolts at the earth with his hammer (POHANKA 2018).

Even after more than 300 years of spiritual enlightenment in Europe, there is apparently still an archaic fear of natural weather phenomena in our “inner Neanderthal.” This overview is not intended to and cannot replace the available scientific work, but rather aims to stimulate a more intensive and critical examination of the multifaceted topic of climate change. The developments of solar radiation, plant growth, temperature, etc. shown in the following graphs are based on interdisciplinary scientific investigations of trace elements, isotopes, pollen, microfossils and many more in ice cores, in marine and lake sediments and in tree rings, to name only the most essential sample types.

Since it is not possible to directly determine the temperature and solar radiation of the past, science makes use of so-called “representatives”, called “proxies” in English. Proxies for these climate-relevant parameters include the concentrations of the isotopes 14C, 10Be (for solar radiation) and 18O (for temperature development) in soils, sediments, ice cores, organisms, etc. Archaeological findings, e.g. from Roman times, show that the sea level rose more or less continuously already in “pre-industrial” times (before 1850). All these extremely exciting detailed information and individual results, as well as detailed explanations of the most different methods of analysis, are available in detail in the publications cited below. Particularly noteworthy here are the works of SIROCKO (2012), the BGR (Federal Institute for Geosciences and Natural Resources, 2004) and VAHRENHOLT & LÜNING (2020).

In the course of the present compilation, new highly interesting facts were found again and again, almost like in a detective story, which made the present work and the bibliography much more comprehensive than planned after all. With my remarks I do not want to convince, but to stimulate a critical examination of the current “main stream”, according to the remarks of the Spanish philosopher José Ortega y Gasset (1883-1955) on the subject of the “essay”: “… in which the teachings – even if they are scientific conviction for the author – do not demand that the reader take them in as truths. I bring here only “modi res considerandi,” possible new ways of looking at things. I call upon the reader to try out these new views to see if they are really fruitful views. Thus the reader makes the judgment for himself alone and on the basis of his experience whether they are true or false.”

About the author: Dr. rer nat. Dipl. Geol. Stefan Uhlig studied geosciences at the Technical University in Karlsruhe with a specialization in applied geology and geochemistry. Afterwards he worked in mining in Spain and in geoscientific projects in Mexico and southern Africa, as well as in deep drilling projects on land and at sea. The field work for his dissertation on stratiform copper mineralization was realized in Namibia, where he cooperated with the local Geological Survey. Later, he worked in the field of X-ray analysis, which took him to Latin America and again to southern Africa, among other places. He now makes his geoscientific findings and experiences available to a wider readership.