Click here for video made by a Playboy Germany editor, who was in the stadium at the time of the incident. Another angle here. Also video below…

The opening European Cup match for the French and German national teams was about to start at Munich’s Allianz Stadium when suddenly a paraglider flew in from the sky before briefly getting tangled with a steel cable and then swerving uncontrollably across the fans and crash-landing on the pitch. 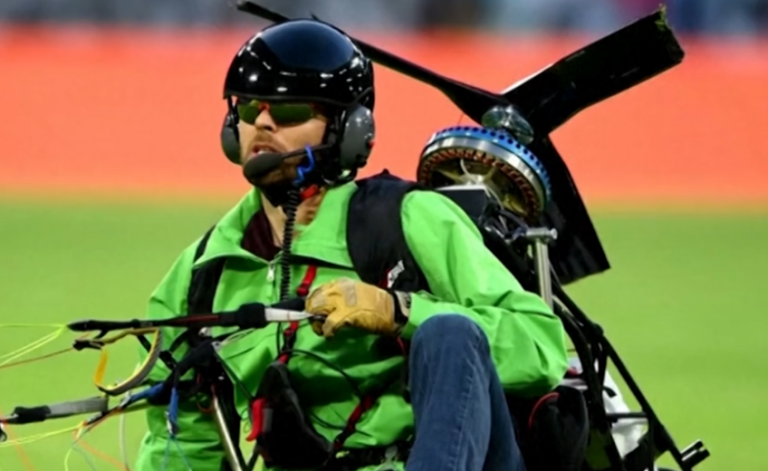 Moron of the day. Hoping to get lots of attention and drawing millions in donations, this Greenpeace activist wound up injuring two fans and crash-landing on the pitch before a televised European Cup football match between Germany and France. Image cropped here.

Two fans suffered head injuries and had to be treated at a nearby hospital. The German DFB football organization now promises legal consequences for the “reckless stunt”. The outcome narrowly missed being much worse.

Greenpeace Germany apologized for the botched bid to send its climate-rescue message. A spokesman tweeted: “We sincerely apologize to the two people who were injured during the #Greenpeace action yesterday.  The pilot wanted to drop a balloon with the message ‘Kick Out Oil’ into the stadium, but then had to make an emergency landing because the hand throttle control of the paraglider failed.”

German authorities were not amused by the brazen publicity stunt. Though Greenpeace insists they had notified the police just prior to the stunt, authorities say they never got the information a paraglider was about to fly in.

Moreover, it was only because of the Greenpeace logo that police anti-terrorist sharpshooters did not open fire.

Police spokesman Andreas Franken said the activist was apprehended, but was later released. The Greenpeace activist, 38, is now under investigation for the criminal offenses of obstructing aviation space, bodily injury and trespassing. (Reckless stupidity, however, is still not a crime in Germany).

Franken added, “We have to note that a large number of people were endangered, both for the people in stadium and for the pilot himself. Greenpeace here disregarded the risks of serious injury”. The environmental organization seemed to even willing accept collateral damage if that’s what it takes to get the message out and grab attention.

Greenpeace, once darlings of the German media, have since reaped some criticism and condemnation from the media. T-online.de for example commented: “We can only hope that the activist will be punished accordingly. And that Greenpeace will refrain from such crazy acts from now on.”

Will probably get off easy again

Skeptics, however, assume that the reckless activist and his Greenpeace organization will get off easy though – as they always do. Many say that if something similar had been carried out by a COVID lockdown protester, or a Trump supporter or an anti-vax activist, there would surely be loud media calls for prosecution for attempted manslaughter and terrorism…arguably deserved.

What’s also rather remarkable and hypocritical: all the gear employed by the Greenpeace activist – parachute, clothing, etc. – were made out of or through the use of hydrocarbon fuels. Even the ultralight likely used hydrocarbon fuel for its power. And what was used to transport the paragliding activist above the stadium? Did he flap a pair of wings?