Germany’s flagship online business daily “Handelsblatt” here reports on the country’s “electricity price shock” as the  cost of electricity “is climbing ever higher “.

“Energy policymakers are sounding the alarm,” reports the Handelsblatt.

In the late 1990s, German electricity prices were falling before the country passed the EEG green energy feed-in act in 2000. Since then, prices that German industry pays have almost tripled: 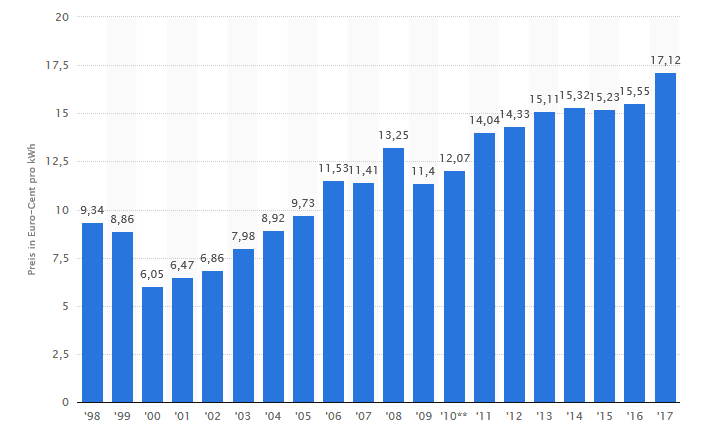 For private consumers, the prices are about double that paid by industry. So high electricity prices have risen, that now experts are warning of dire consequences.

“On the futures market of the EEX energy exchange, a megawatt hour (MWh) of electricity to be delivered next year costs just under 70 euros,” according to the Handelsblatt. “In March 2020, at the start of the pandemic, a MWh cost 35 euros. The price is driven by the equally steep rise in the CO2 price. A trend reversal is therefore not in sight.”

Handelsblatt uses the company Coatinc, a galvanizing plant, as an example. Previously the Bochum-based company had been paying around 40 euros per MWh for electricity but expects it will have to “get used to paying” up to 200 euros per MWh – once all taxes and surcharges are added in.

“The German Association of the Energy Industry (BDEW) also expects industrial electricity prices, including all levies, to average 191 euros per MWh this year,” says the Handelsblatt.

Gundolf Schweppe, head of Energy Sales at Uniper, describes the current trend as a “dramatic rise” and says there’s “a great deal of uncertainty” among his customers.

More than 75% tax and surcharges

Handelblatt reports, that the price increases ultimately will have to be borne by the German consumers, who already are paying among the highest rates in the world. More than three quarters of the price paid by German consumers is made up by various taxes, fees and climate-related surcharges.

Experts tell the Handelsblatt: “The price curve is pointing really steeply upwards” and that this steep upward trend “is likely to be sustainable” and that “electricity prices will remain at a high level.”

Add the skyrocketing electricity prices to the surging prices for gas, petroleum, chemicals, metals, polymers and wood and you have all the ingredients for painful inflation to take hold.