What would we do without coal?

The first half of 2021 saw a massive 20% drop in wind power consumption in Germany…while “coal power saw a renaissance.”

In the latest climate video, Die kalte Sonne cites a variety of electric utility companies and electric power trade associations concerning electric power consumption in Germany for the first half of 2021.

Here we find a number of surprises. 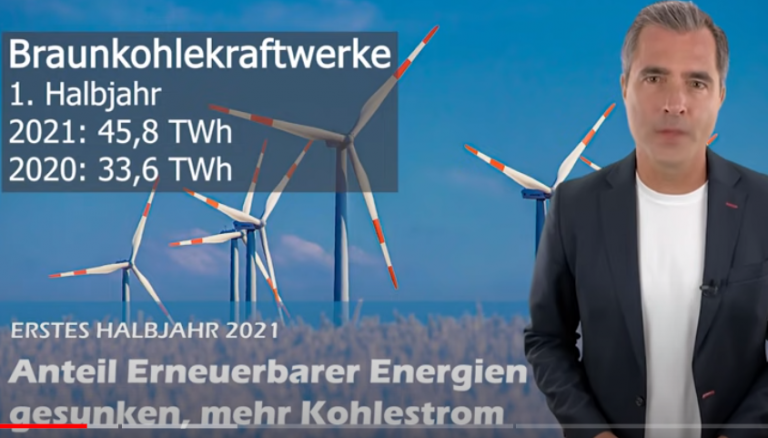 The share of renewable energies in gross electric power consumption in the first half of 2021 fell from 50% to 43% compared to a year earlier,” Die kalte Sonne reports. “The production of onshore and offshore wind energy decreased by 20%.”

The reason for the steep drop, according to the findings, was due to unfavorable weather conditions. “This year, especially in the first quarter, the wind was particularly still and the sun output was low.”

Solar energy output on the other hand rose a modest 2%.

Coal picked up the slack

So where did all the missing electric power come from?

According to Die kalte Sonne:

Coal energy saw a renaissance. Brown coal [lignite] power plants produced 45.8 terawatt-hours of the net power – that is the power mix that comes out of the outlet.  That’s a strong increase of 37.6% compared to 2020, when only 33.6 terawatt-hours were produced.

In total, that means total coal power rose from 48 terawatt-hours to 66.2 terawatt hours, a whopping 38% increase!