Today we look at September mean temperatures at the stations across northern Europe for which the Japan Meteorological Agency (JMA) have enough data. We find fall is not being pushed back as we should expect in a warming world.

The JMA has published the data for September and again we see a continuing warming hiatus.

First we look at the September trends from 6 stations in Ireland since 1991:

In Ireland, three stations have warmed in September while three have cooled. Taken altogether, there’s been very little notable change – certainly nothing alarming is going on. 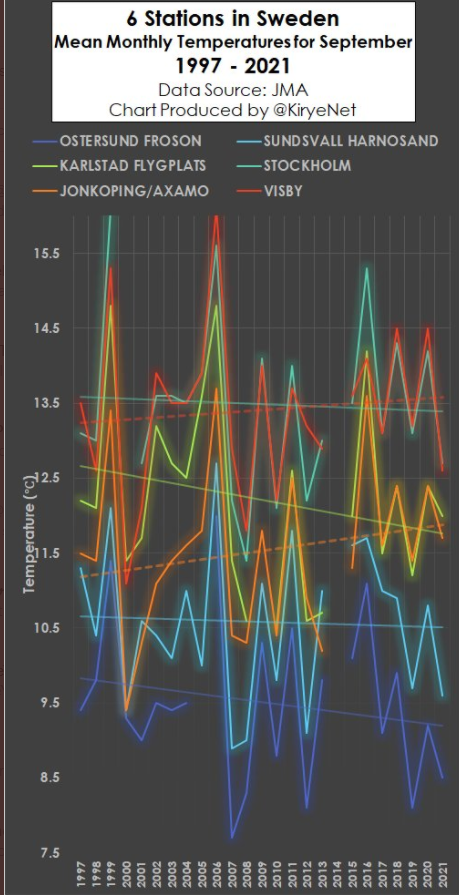 Four of six stations in Sweden have seen a cooling September trend since 1997, long before Greta Thunberg was even born. Already back in mid September parts of Sweden got socked by up to 80 cm of snow!

Finally we look at the trends at 6 stations in Finland, going back close to 2 decades: 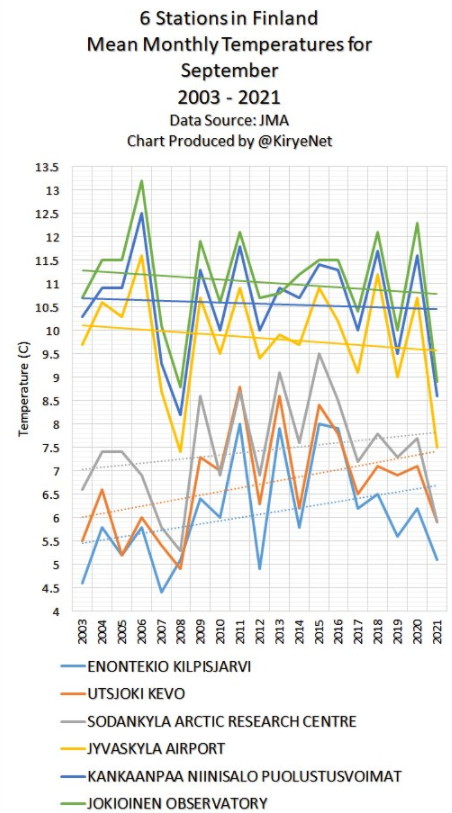 Half of the stations in Finland have seen cooling and three have seen warming. Interesting is that the rural, far northern stations have warmed, while the southern stations where the larger cities are found have cooled. All in all, autumn over northern Europe is obviously coming right on time, without delay, like it used to do in the past.

Snow hit Finland early this year as well, already on September 14th. According to the online https://mkweather.com/.

Parts of Finland, including of metropolitan area of Oulu experienced on Tuesday, 14. September 2021 with the first snow of the season!

A snowstorm hit mainly Lapland and parts of the northern half of the country and on roads, several centimeters of snow layer appeared immediately after a few hours of snowing.”

It was the earliest snowfall in history for Vaala Pelso, in central Finland.