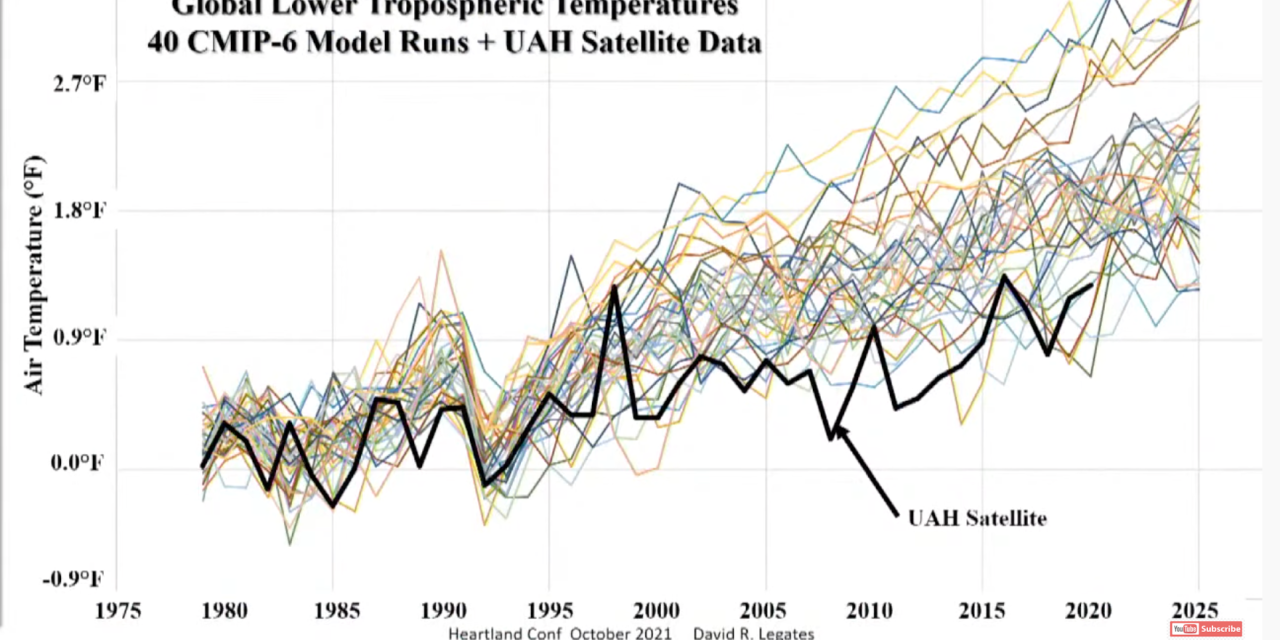 Climate models do not represent reality. They sre running too hot.

Climate modeling has been awarded the Nobel Prize. But two German researchers prove that observations are more important than calculations in climate research.

There was great satisfaction among protagonists of man-made climate change when the Nobel Prize Committee awarded at least half of this year’s Nobel Prize in Physics to American Syukuro Manabe and German Klaus Hasselmann. The two researchers are pioneers of what is known as climate modeling – that is, the attempt to trace and predict climatic developments with the help of mathematical models.

The prize recognizes “that our knowledge of the climate rests on a solid foundation, based on rigorous analysis of observations,” praised Thors Hans Hansson of the Nobel Committee as he announced the winners. Of “balm for the beleaguered souls of climate researchers,” wrote the “Tages-Anzeiger.” It will now be “even more difficult to ignore and discredit climate research.” Climate models were based on “solid physics,” it said.

With so much applause, it was lost how big the scientific problems are that go hand in hand with climate modeling. This was evident again just recently with the models called CMIP6, which form the basis of the new Intergovernmental Panel on Climate Change report issued in early August. The CMIP6 models are not able to correctly reproduce the real temperature development of the past decades and simulate a warming that is much stronger than the real data show. Thus, there can be no confidence in these models to correctly predict future warming. The Intergovernmental Panel on Climate Change has nevertheless relied on them.

Critics of climate modeling include, in particular, Steven Koonin, a highly accomplished American physicist and climate scientist who once served U.S. President Barack Obama and recently published a “climate skeptic” book. He notes that climate models have failed time and again because they fail to prove human influence on global warming. Discrepancies among individual climate models showed “that the science is far from settled”. 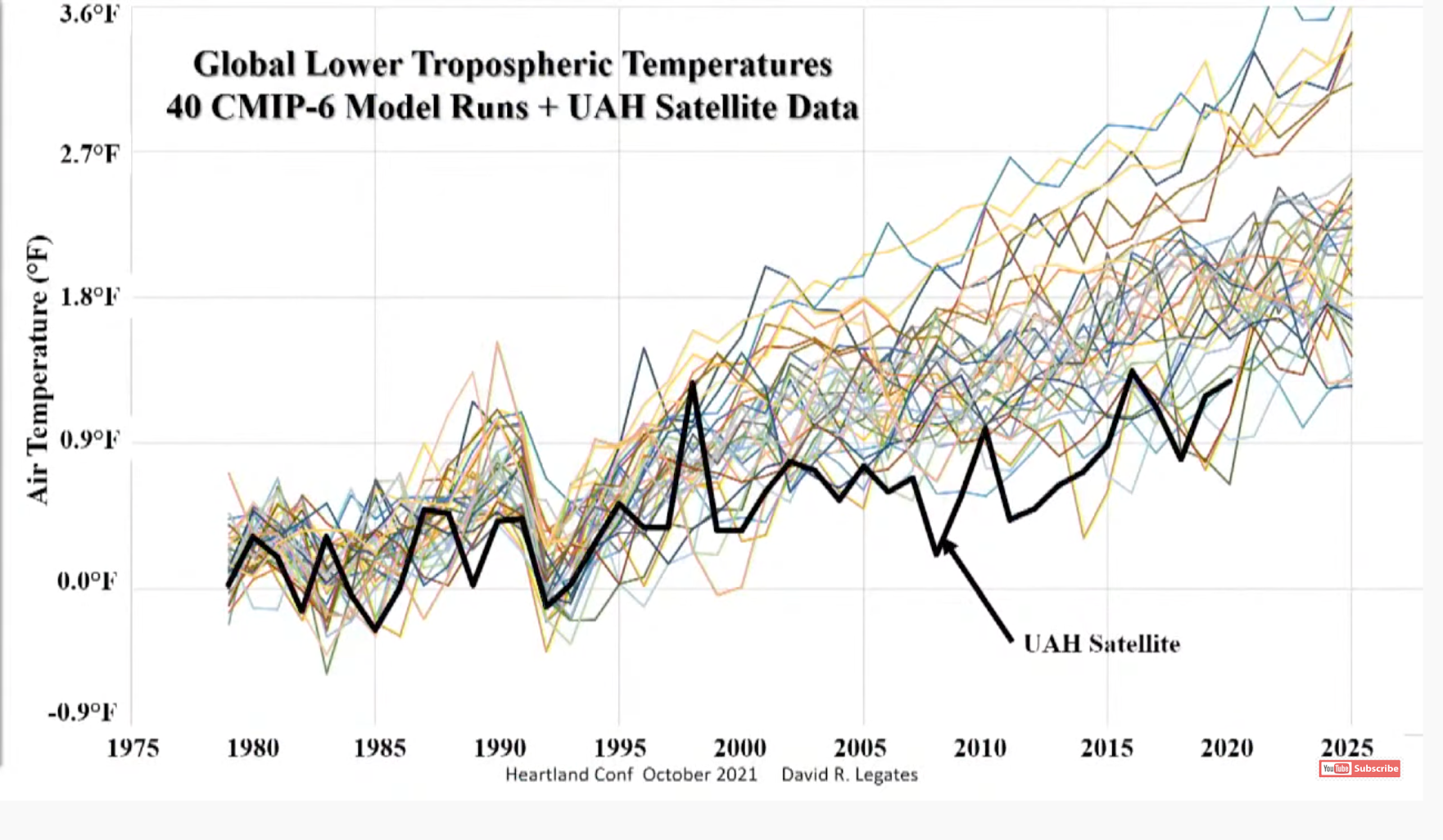 In general, real-world data repeatedly calls into question the results of climate models and thus the tone-setting climate science. This is also the case with a study by German researchers Fritz Vahrenholt and Hans-Rolf Dübal, which has just been published in the peer-reviewed scientific journal Atmosphere.

Vahrenholt and Dübal are originally chemists, but have worked extensively on climate science in recent decades. The study is based on data from NASA’s Clouds and the Earth’s Radiant Energy System (Ceres). Ceres has been using satellites to record the radiation that reaches, and is emitted by, the Earth since 1998. The project’s goals include a better understanding of the role of clouds and the Earth’s radiation balance with respect to global warming.

And it is precisely these data from Ceres that throw a wrench into the thesis of man-made climate change. Vahrenholt and Dübal conclude that it is not man-made enhancement of the greenhouse effect that is the main cause of warming over the past 20 years, but a two percent decrease in cloud cover during that period. According to Vahrenholt and Dübal, the weaker cloud cover has resulted in more shortwave radiation from the sun reaching Earth. This increase in solar radiation has been a major driver of global warming.

NASA researchers led by Norman Loeb, as well as Finnish researcher Antero Ollila, have each pointed out in a study that shortwave solar radiation increased from 2005 to 2019 due to a decrease in low clouds. Dübal and Vahrenholt have now studied radiation fluxes for the entire period from 2001 to 2020 – both near the ground and at an altitude of 20 kilometers – and related them to changes in cloud cover.

Greenhouse effect had only a small impact

In fact, the satellite data from Ceres show that the shortwave radiation emitted into space by the clouds has decreased by about two percent in both the northern hemisphere (NH) and the southern hemisphere (SH). With solar radiation remaining nearly constant, this means that more shortwave radiation has reached the Earth’s surface and contributed to warming. At the same time, the fraction of longwave radiation that is reflected back to Earth from the atmosphere has only warmed the planet to a lesser extent. This radiation back to the earth is the greenhouse effect, which has been intensified by the emission of climate gases. According to Fritz Vahrenholt and Hans-Rolf Dübal, this enhanced greenhouse effect has even been largely compensated by the aforementioned decrease in cloud cover: The decrease in clouds has resulted in more longwave radiation reaching space from the earth.

IPCC relies on model calculations instead of real data

The study results of the two German researchers contradict the claims of the Intergovernmental Panel on Climate Change (IPCC), according to which the observed warming occurred solely because the proportion of long-wave radiation reflected back to Earth from the atmosphere increased (due to the stronger greenhouse effect). The IPCC attributes 100 percent of the warming to this enhanced greenhouse effect – but justifies it with model calculations rather than real data.

“The warming of the last 20 years has been caused more by changes in clouds than by the classical greenhouse effect,” say study authors Fritz Vahrenholt and Hans-Rolf Dübal

In their study, Vahrenholt and Dübal also looked into the background of the observed stronger heat absorption by the Earth. The corresponding explanations can quickly exceed the understanding of laymen: Based on observations of the so-called enthalpy of the climate system and oceanic heat uptake, it was shown that there have been two warming periods on Earth since 1850, each lasting 20 to 30 years. A third warming period began in 1990 and continues to this day.

The onset of each of these three warming episodes was accompanied by changes in the Atlantic Multidecadal Oscillation, a natural periodic ocean current in the Atlantic that significantly determines the climate…

End of the warming period could mean end of global warming

The third warming period coincides with the observed decrease in cloud cover. Whether this warming period, like its two predecessors, will end soon must be clarified by measurement data in the coming years. If the warming period ends soon, global warming should decrease and the announced “climate catastrophe” will largely fail to materialize.

The Intergovernmental Panel on Climate Change is thus challenged to review its findings.